Roxanne – From France to America with love and fun 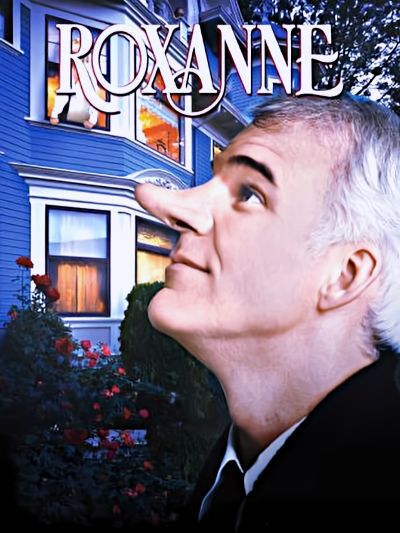 Today we are in the mood for romance, so let’s talk about a 1987 movie, an American remake of the French classic Cyrano de Bergerac.

Instead of the famous, fierce, curmudgeonly swordsman, here we have the fire captain of a small Canadian town.

The man is funny, intelligent, and has great charisma, pleasing the women and being practically friends with the whole town.

His life changes, however, when the beautiful Roxanne comes to town. The young scientist, indeed, is awaiting the passage of a meteor for a major breakthrough in her astronomer’s career.

The moment he sees her, he feels an immediate and irresistible attraction but hesitates to make a move to declare his love.

Indeed, like the French comedy’s famous protagonist, the man has a massive nose about which he is very touchy.

In addition, the girl falls in love with another firefighter, a younger, handsome boy. He has also just arrived from America, with the task of training his Canadian colleagues.

This boy, however, is an ignorant klutz and panics whenever he has to talk to her, always making a fool of himself.

Therefore he asks the boss for help in wooing her, obviously not knowing that he also has a crush on her.

The man then starts writing poems that he sends to the beautiful scientist, pretending to be the guy.

In this way, he quickly wins her heart, but unfortunately, the deception cannot last long.

Quickly, the girl realizes that the words that warm her heart are someone else’s.

At that point, this theater of lies falls ruinously, and the captain can no longer hide behind a false name.

An entertaining imitation of an immortal masterpiece

As mentioned above, Roxanne is a delightful modern 1987 movie remixing the chemistry of a classic such as Cyrano de Bergerac.

In this case, however, the great original drama is entirely absent. What remains is the romantic comedy with the ugly brilliant protagonist hiding his feelings from his beloved out of shame.

Still, the result is an excellent piece of cinematic entertainment, with a sunny story and consistently brilliant pacing and jokes.

The narrative basis is the classic romantic triangle of the original, simple but consistently effective over time.

A triangle where the captain is in love with the beauty, who instead loves the younger man, who finally asks the former for help in courtship.

For those familiar with the French opera, the vastly different ending may be a significant flaw. I don’t deny it either; it is an overly sentimental screenplay superficiality that is typically American.

The screenplay is written by the protagonist, Steve Martin, who repurposes Edmond Rostand‘s text, sewing a character perfect for his comedy.

First of all, there is no lack of laughter. Humor is constant throughout the film, even in the slower, more romantic parts.

Moreover, the jokes have a simplicity that makes them perfectly enjoyable even today, although Roxanne is a 1987 movie.

Indeed not the best comedy of those years, but standing the test of time is never an easy thing to do, and in this one, it succeeds perfectly.

Some of the dialogue is a clever actualization, such as the twenty joke variations Martin invents on his own nose.

So, even with due differences, the poetry of old Cyrano is still as powerful as ever. As far as I am concerned, indeed, the imagination of this immortal work will never die.

Good today as yesterday, and probably tomorrow as well

From 1987 to the present day, Roxanne is still a romantic, sparkling, and funny movie suitable for all audiences and situations.

Steve Martin is an outstanding leading man, with a machine-gun-like delivery and a neurotic, irresistible mimicry.

Although intelligent and funny, he immediately becomes enraged when anyone tries to say anything about his nose.

Although he has no partner, he knows perfectly the languages of romance. The moment he has the opportunity, he melts the beautiful heart with the sweetness of his poems.

Daryl Hannah is a fantastic modern Roxanne, intelligent and sunny, who falls in love with the wrong man through deception.

The actress makes the most of her sex symbol status and Blade Runner fame, naturally holding her own against Martin.

Finally, Rick Rossovich perfectly plays the role of the protagonist’s comic sidekick in the naive third side of the love triangle.

But despite being a somewhat ignorant simpleton, his character also has dignity. Not surprisingly, in the end, it is he who will unravel this complicated love triangle.

Here is another direction by Fred Schepisi that is undoubtedly not memorable but does its job without too much damage.

The director manages the timing with which to leave room for the protagonist and chooses the best shots to enhance the beauty of this modern Roxanne.

I honestly cannot speak of a masterpiece, but this movie is always helpful to remind us of that flame of romance that we perhaps lose on our worst days.

Movies about Writers, Writing Books, and...