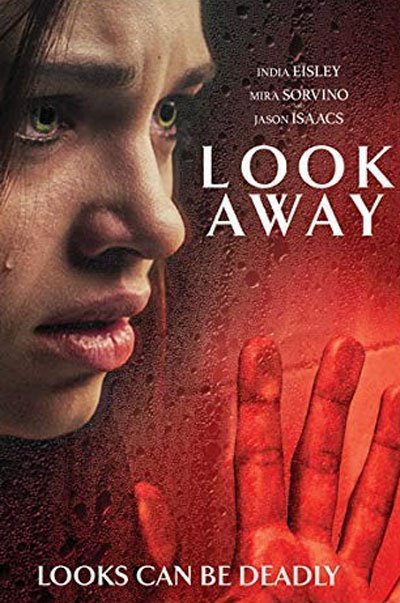 Among the many horror movies coming out in recent years, 2018’s Look Away is one that particularly appealed to me.

The main character is a young girl who lives in the loneliness of not being understood by friends and parents.

It is certainly not money that she lacks, as her father is an established doctor famous for his cosmetic surgeries.

Despite the perfect family appearance, he does not listen to daughter’s problems, betraying a wife apathetic in her happiness delusion.

At school, the girl feels ignored by her peers, if not even bullied by some cruel boys.

She also has an unspoken problem with her best friend, as she feels an intense fascination with her fiancé.

Her coming birthday should be a joyful opportunity, but instead, it becomes the straw that breaks the camel’s back.

Her father’s idea for a present upsets her, as he would like to subject her to several cosmetic beautification operations.

At the height of her despair, she takes refuge in her bathroom, not knowing what to do. When, in a moment, her reflection in the mirror comes to life and begins to speak.

Her mysterious double seems more resolute in what to do to own respect from others and how to become free.

Through her incredible new friend, she opens her eyes to the true nature of the people around her. Since she can no longer ignore reality, she becomes even sadder for no one can be trusted.

Thus will begin a relationship in which the two girls on either mirror side will slowly take each other’s place.

Youth and horror, an inseparable combination?

We did not have to wait for Look Away in 2018 to see a movie combining horror with teenage discomfort.

Without citing an endless list, out of all of them, we can look at the excellent Carrie from the 1970s.

Brian De Palma‘s cult was a movie that, along with The Shining, best brought Stephen King‘s literature to the screen.

However, the horror we discuss today also has something to say, bringing freshness to an overused but often misunderstood topic.

Even the Carrie 2013 remake lacks the original spirit, despite an outstanding cast with Chloë Grace Moretz and Julianne Moore.

First, don’t expect too much violence or gore galore, but rather a sense of constant and increasing tension throughout the story.

Moreover, the bullying we see in school is more psychological than physical. The constant nastiness makes the main character feel ugly and inadequate even though she is a beautiful girl.

But her shy attitude is not liked by some boys, who offend her despite their desire, as we later see more clearly when the mirror half takes over.

The very idea of going crazy looking in the mirror, what can it mean if not the fixation that many people have of wanting to be aesthetically perfect?

In this case, the fixation is from the father, who is not coincidentally a cosmetic surgeon. The man would like to reconstruct his daughter to conform to society’s standards.

I would say that, sadly, this is an absolute horror, not the ghost in the mirror.

This desire for beauty becomes horrifying as it is unfortunately highly close to the reality of many miserable people.

When real fear comes from family

Aside from all its internal themes, 2018’s Look Away is a movie that dramatically depicts a small, dysfunctional family unit.

The protagonist is young India Eisley, beautiful and convincing in the dual role through the looking glass.

Indeed, the actress is good at playing a misunderstood girl who is uncomfortable with others until the narrative twist.

Later she is even more charming and charismatic in playing this twin spirit, who we never understand whether she wants to help the girl or not.

In the father’s role, we have a glacial Jason Isaacs, all the more disturbing because he claims to want the good of his daughter.

But really, what he does is want to control every aspect of her life, in a delusion of dominance that will lead to wanting to change her face and body.

On the other hand, helpless and sad is Mira Sorvino, an apathetic and absent mother who does not realize what is happening.

On her, it closes the curtain of this story in an unforgettable sequence where it could not miss a conclusion on a mirror.

At the helm of this teenager-horror is Israeli Assaf Bernstein, who proves to be a talent we must not underestimate.

The director had already made the intriguing The Debt, a solid spy thriller in the milieu of Mossad secret agents.

In this case, his storytelling is more effective, focusing on a smaller, closed story with far fewer characters and a more thoughtful pace.

In case you have not yet gotten a chance to see it, catch up on this still very recent horror movie because it has a voice to be heard.