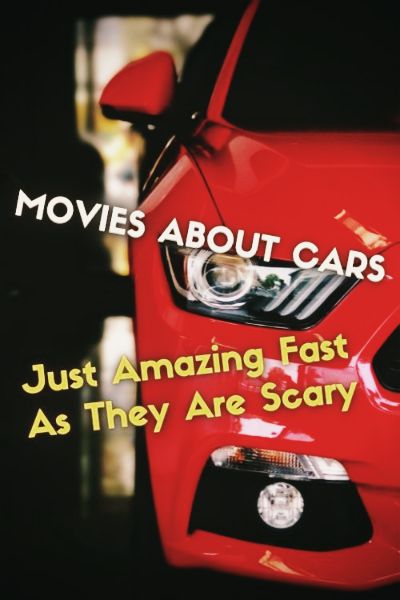 Let’s face it, each of us has at least once wished for the beautiful cars we see in the movies.

Speaking of chases then, how could we not mention the fantastic white Dodge Challenger from Vanishing Point?

His incredible escape across the United States was an ode to freedom in the 1970s. Not surprisingly, it is universally recognized among the best road movies ever.

I am not thrilled with modern car cinema, often lowered to tasteless productions like the many Fast and Furious movies.

But the movies we are talking about today are very different, staking everything on ubiquitous fear and narrative tension.

So without further preamble, let’s gear up and step on the gas; it’s time to make our engines scream.

Let’s start with a scary horror film that I saw very young one night at home alone.

The story begins in a small town in the middle of the desert in the southern United States. Life flows quietly and peacefully, each day is the same as the next.

The sheriff is courting a beautiful local schoolteacher, somewhat secretly but basically, everyone knows it.

Wanting to propose, he must realize whether his girls accept her like their mother, who died many years before.

The wife of a known alcoholic repeatedly shows to the ER, a clear sign that her husband is mistreating her.

But the children are happy because the big day of the city parade where everyone will be partying is approaching.

Into this almost mundane rural setting comes a black car with no license plate and tinted windows. It emerges from nowhere like a demon from hell, coming out of the highway tunnel.

There is no way to see who is behind the wheel, hidden behind the car’s nose. Yet the headlights and radiator almost look like the ferocious grin of an animal.

This four-wheeled animal immediately begins killing anyone who crosses its path for no apparent reason.

The sheriff and his men try in vain to stop and capture it, but it soon becomes clear that the menace is more than just a car.

Decimated numerically and shocked by the ferocity of these murders, everyone is at their limit. So they organize one last attempt, launching a desperate attack against what seems an invincible enemy.

Never give a driver’s license to the devil

Perhaps time will warp my perceptions about this movie because I was young and impressionable; I do not deny that.

However, I remember having a great experience of fear and wonder when I saw The Car for the first time.

The atmospheres blatantly traced those of such a genre masterpiece as Steven Spielberg‘s Jaws, released just a few years earlier.

Here, too, director Elliot Silverstein reveals the monster to us a little at a time, hiding it in the darkness of the night or the thick dust raised by skidding.

Like a dangerous predator, the car attacks pedestrians and cyclists on the road and then disappears into the desert wastelands.

Once it tastes the blood and fear of its victims, the monster tightens its circle around the city, terrorizing the entire population.

In addition to an enthralling devilish atmosphere, the movie offers some excellent driving sequences, sped up supersonically in the editing.

There are no familiar faces in the cast. We do, however, recall the fantastic James Brolin, father of the better-known Josh Brolin, the well-known Thanos from Avengers saga.

By his side, we recall the beautiful Kathleen Lloyd. A sweet but also combative woman who will be the first to openly challenge the evil four-wheeled invader.

Otherwise, the character actors do their dirty work, mostly, that is, being fodder scattered around the streets.

However, what matters is the atmosphere of (not) seeing the devil behind the wheel of a car in a movie. A cult film that, perhaps for a few, has long been unforgettable and highly recommended.

After a movie about cars somewhat forgotten but had their fans, we come to a little thriller that many few will be familiar with.

Our protagonist, this time, travels not in a car but a truck, crisscrossing the length and breadth of South Australia on his deliveries.

His only companion is his faithful dingo dog, who mostly sleeps soundly in the back of the cab all the time.

The man is not particularly strenuous in doing his job, often taking it easy and doing things at his own pace.

During his travels, he often argues for trivial reasons. For example, when they drive too slowly and he fails to overtake them.

However, one day he observes a very suspicious man with a van digging a ditch not far from the road.

Disturbed by constant radio reports of a serial killer the man has a hunch. The man he saw, indeed, may be responsible for numerous disappearances of women.

He initially tries to contact the police and convince them of his suspicions. But they, unfortunately, know his reputation, therefore are not at all willing to believe him.

So he decides to hunt down the man in the van, convinced that if he doesn’t take care of it, no one else will.

A sexy hitchhiker on the run from an annoying father is the only one who believes his story. So she accompanies him and helps in the manhunt, even beginning to fall in love with him.

However, things will turn out worse than she thought when she ends up kidnapped by the same maniac.

At that point, the truck driver will be the only one who can save her. Always considering if he doesn’t get into trouble for other nonsense first, as he unfortunately usually does.

A movie and filmmaker with an unfamiliar fate

Roadgames is a car and truck movie with an omnipresent, light sense of humor on its side.

The story is not much different from Rear Window by the great Alfred Hitchcock, sharing several of its points and twists.

Except that in this case, instead of a wheelchair-bound protagonist, we have a cheerful truck driver looking for trouble.

Stacey Keach reaches the pinnacle of a career as a character actor in supporting roles, this time as an absolute and engaging leading man.

It’s impossible not to feel sympathy for this likable rogue, if at times vulgar and a pain in the ass, but always full of joy and a desire for freedom.

The ultimate irony comes when, through a series of misunderstandings, he becomes the police’s number one suspect while simultaneously struggling to save the girl.

Equally free and beautiful as a flower is Jamie Lee Curtis, very young and still in the early days of her life as a Hollywood star.

The moments and dialogues between the hitchhiker and the truck driver are the best part, where the two bonds immediately fall in love despite the difference in age and social background.

Richard Franklin was not much appreciated during the 1980s, although he was the author of several exciting films, such as the excellent horror film Patrick.

In his cinema, we can see much of the narrative and characters from the great Hitchcock, whose sequel to the famous Psycho he not coincidentally directed.

In conclusion, Roadgames is an opportunity to know not only a movie but a director who unjustly never achieved fame.

We return to America’s big highways in a movie where the protagonists collide in powerful souped-up cars.

The story begins with a young girl and her best friend getting involved in a terrible rear-end collision in traffic.

As the friend gets out of the car searching for help, a mysterious driver swoops down on her, killing her instantly.

Sometime later, the girl still suffers from the trauma of that day, so she attends some support groups with other survivors of traffic accidents.

During one of these group therapy sessions, he meets another taciturn and charming guy. However, these seem reticent about the effectiveness of these groups, walking away ruefully.

The boy mysteriously disappears as he arrives, so she returns home accompanied by a friend.

But the same car that had killed her friend returns to the road, chasing them and trying to kill her as well to complete the task.

The mysterious boy reappears, coming to her rescue just in time to miraculously save her from the psychopathic attacker.

At that point, he explains everything to her, telling her that the killer driver is a serial killer. For years, this madman has been killing young women, undisturbed, on America’s most isolated streets.

It then becomes clear why he is so obsessed with defeating him because the same man ran over and killed his wife many years earlier.

The girl therefore becomes the focus of the challenge with this serial killer of the road. But a cop also joins in as the movie hurtles toward a climax fast as the contenders’ souped-up cars.

A serial killer movie in and out of cars

Robert Harmon returns to the road nearly two decades after his masterpiece The Hitcher with a magnificent and utterly maddening Rutger Hauer.

Yet this time, the psycho on duty is not a hitchhiker but rather a wheelchair-bound man who lives in and with his beloved car.

This car is the murder weapon he uses to kill his victims and then drives off, leaving no trace behind.

In this manner, no one is after him; indeed, the police cannot even believe he exists.

It’s just too bad we don’t see much of him during the movie, except in the high-tension final part.

Hot on his heels, never giving up a mile, is Jim Caviezel, a furious husband seeking revenge. A character who is certainly a far cry from the messianic forgiveness of The Passion of the Christ.

All things considered, the car chases are not many either, but both protagonists are resolute and credible behind the wheel.

The winner’s prize in this souped-up car challenge will be the beautiful Rhona Mitra, the undisputed drama queen of the movie.

She is an actress who never got what she deserves, in my opinion, even though starring action in such hardcore movies as Doomsday.

In this case, she is the classic damsel in distress but nevertheless adds dramatic value to an otherwise mundane character.

Through the years, Robert Harmon and his movies have collected quite many devoted fans.

However, for those wishing to approach his filmography for the first time, Highwaymen is definitely a solid starting point.