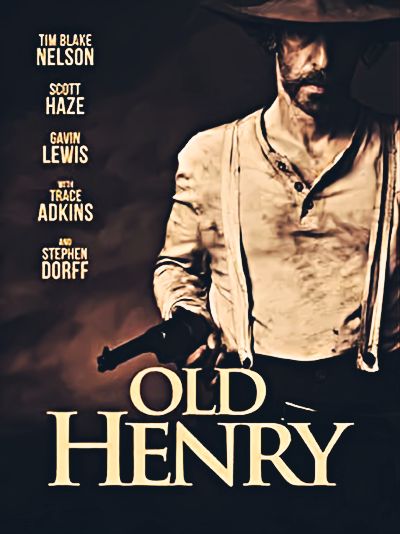 The western genre was born with cinema, although today, we see less and less of it except for rare movies like Old Henry of 2021.

The story is about a humble farmer widowed when his wife dies of tuberculosis, leaving him with a young boy to raise.

Together with an old friend who lives nearby, father and son run a desolate Oklahoma farm.

They tirelessly work all day, patching up the house’s many messes and tending livestock without prospects or pleasant diversions.

Yet the man is very proud to lead that kind of life, having claimed that piece of land from an Indian territory many years before.

On the other hand, his son is very reticent, darting to get away and discover the world for himself.

One day a bloodstained horse appears on the horizon, whose trail they follow to find its master.

The man lies wounded with a bullet in his chest not far away, appearing to be just a scoundrel. But the silver star indicates that he is a sheriff, so they decide to help him.

Just as he is recovering, three criminals arrive demanding they deliver the man because he stole a rich bag of money.

At that point, the farmer must decide between accepting or risking his family’s lives by standing his ground.

But the invaders do not know that he also hides an incredible past of crime and violence.

So against all promises, he will have to brandish once again the gun he promised never to touch again.

When I said that today there are fewer and fewer western movies like Old Henry of 2021, I meant first of all in pace and duration.

The story flows slowly and then accelerates to a frenetic action finale with a widely anticipated and inevitable shootout.

This pace is very reminiscent of Clint Eastwood‘s magnificent Unforgiven, with which it shares some plot elements that I don’t want to spoil.

Overall, what works best is the atmosphere of gunfighter-era decadence versus the coming modern society.

Moreover, with its hour and a half running time, director Potsy Ponciroli tells us a seemingly small, almost insignificant story.

Don’t be fooled by appearances. Not least because sometimes visual minimalism is a hallmark of the best gunslinger stories.

Indeed, with one real narrative twist, everything changes, and the aura of glorious epic suddenly lights up the scene, igniting spirits.

In this context, even a small shootout in a middle-of-the-nowhere house becomes the latest chapter of a legendary American icon.

It will probably depend on my taste in movies, yet in the ending, I was very excited and emotionally touched in a way I did not expect.

Be that as it may, I admit hardly many will remember it as a genre milestone.

But in this desert landscape of 2021, I want to challenge anyone to find me other recent westerns that are better than Old Henry.

In which hands do guns sing on the hills?

After many years of minor supporting roles, Tim Blake Nelson takes the stage by becoming an absolute star.

His old Henry makes us feel what the current state of western movies is like in 2021. A genre that is worn out for many, just as this character seems to have nothing left to give.

Yet in westerns, we find some of the most direct and compelling stories. Small epics are often better than the big ones, where men fight primordially in blood and dust for their freedom.

No one knows whom the protagonist is except his best friend, played by Trace Adkins. He does not appear much on the scene, yet his presence is what triggers the final carnage.

Knowing that his life is now gone and he has gambled away his best chances, all this mysterious farmer cares about is his son.

In the role is the young but convincing Gavin Lewis, a clumsy gunslinger whose father strictly forbids touching guns.

But that life will still find a way to come down on the boy as if it were a destiny that runs in his blood.

Injured victim Scott Haze will be as much a mystery as the protagonist. In an ambiguous role with no room for hope or remorse, he also has more to tell than it appears.

Finally, like any Western, it takes a villain of depth; in this, we have the excellent Stephen Dorff.

I think the big productions have underestimated this actor too much, creating a dangerous sadistic sociopath with natural simplicity here.

Around him gather the crows who would like to storm the farmer’s house, sure of an easy victory.

But for those who want to see how it ends, a smile will leave you spectacularly amazed and saddened at the same time.

In conclusion, with such characters, the director accurately directs the crucial moments of a story that spares no one pain.

The story is delightfully romantic and nostalgic, following the logic of old-time movies. Actually, it could bring even those among the younger generation who have never seen many westerns closer to the genre.

Unfortunately, there is not enough talk about Old Henry, or at least I never heard of it among the various 2021 movie releases.

So if you fall in love like me with this film, let’s try to spread the word. Who knows, with any luck maybe we’ll get more, and maybe they’ll be even better publicized.

Because if the public doesn’t even know that certain films exist, what are they producing them for? How can we judge whether we like them or not?

Perhaps someone smarter among you might have an answer. If so, please let me know.