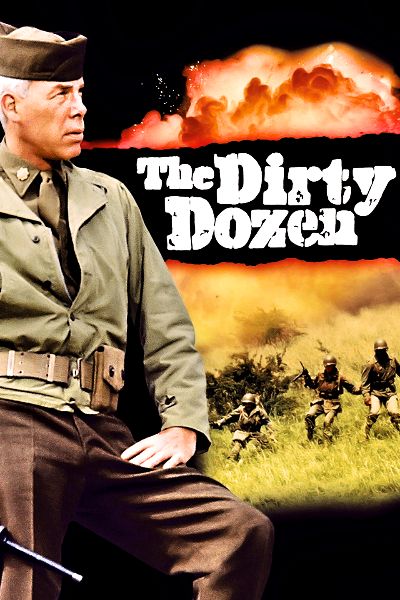 The story begins with Allied forces in France summoning an army major known for his undiscipline.

Despite this, he is also an officer of great tenacity and ability, so they entrust him with a critical secret mission.

Within a few weeks, the intelligence service discovered that the Nazis would gather many high officers in a fortified castle.

The opportunity to simultaneously kill these important figures in the German army is too favorable and must be taken advantage of.

However, the mission will almost certainly be a one-way trip. Therefore, first of all, it is necessary to find men prepared for a suicidal undertaking.

The command then decides to set up a special team, bringing together twelve lifers who have nothing to lose.

Indeed, they are all prisoners with death sentences or long periods of detention in military prisons.

Initially, the criminals band together against the major, seeing him as a common enemy to oppose in every way.

Many refuse to obey orders, and the train sees this period only as a momentary vacation from prison.

However, during a series of drill maneuvers, a foolish old colonel publicly mistreats and humiliates them.

So they finally discover a feeling of brotherhood by helping each other, recognizing the Major as a leader and a rebel like themselves.

At that point, they are ready to face their true mission, bravely aware that many may not return.

Are the worst losers the best winners?

Robert Aldrich constructs an excellent entertainment show that combines comedy and action through the magnificent personalities of the various characters.

This handful of murderers and criminals are the classic loser antiheroes the director has always loved. For example, we can recall the similar prison football team in the equally famous The Longest Yard.

In the context of World War II, the adventures of these soldiers become an opportunity to talk about something bigger.

Is there a chance for redemption, even for those who committed heinous crimes like the rapist played by Telly Savalas?

These men are not fighting for freedom or other high ideals, simply looking for a way to stay out of prison as long as possible.

The High Command has little confidence in their abilities or loyalty to the mission they must carry out.

Not surprisingly, one of the commanders immediately expresses his concerns. He states that he is more afraid of them shooting the major in the head than of the Nazi enemies.

From the trust that is lacking on the outside comes a great internal brotherhood. This spark will turn the handful of stragglers into an unstoppable war machine.

Released in 1967, The Dirty Dozen was a resounding success, exceeding expectations among the war movies of the period.

It quickly became a milestone strongly suggested to younger people who may know its name but have never seen it.

Over the years, the movie had numerous sequels and even a TV series, yet none got anywhere near its original progenitor’s height.

Irony and adventure with many old-fashioned war faces

The Dirty Dozen is a parody of military life and its excessive and oppressive regulations.

In order to stage this theatrical play of the absurd, we have a stellar cast, led by the superb Lee Marvin.

The actor holds in his eyes the experience of his personal life as a veteran decorated with the Purple Heart during the Pacific War.

Not surprisingly, his character is a soldier who does not always follow orders, constantly giving his superiors a hard time.

The man will have a tough job getting unruly prisoners in line, starting with the sneering thug played by John Cassavetes.

Initially reluctant to join the mission, the man will later become one of the most exalted members of the team.

Of all the great actors, I particularly liked the always charismatic Charles Bronson and the giant black Jim Brown.

On the other hand, the funniest is a young Donald Sutherland, sometimes naive and stupid but always lively and cheerful.

While quite the opposite is Telly Savalas, as already mentioned, a sex maniac whose madness will ultimately be everyone else’s downfall.

Finally, I would mention the iconic actors for the older officers, such as the brilliant Ernest Borgnine and George Kennedy.

All these great characters enhance a plot that was perhaps not all that original, carving in stone the old saying that unity is strength.

In short, That Dirty Dozen is one of the best classics to start experiencing 1967 movies, featuring a story brimming with irony and yesteryear adventure.