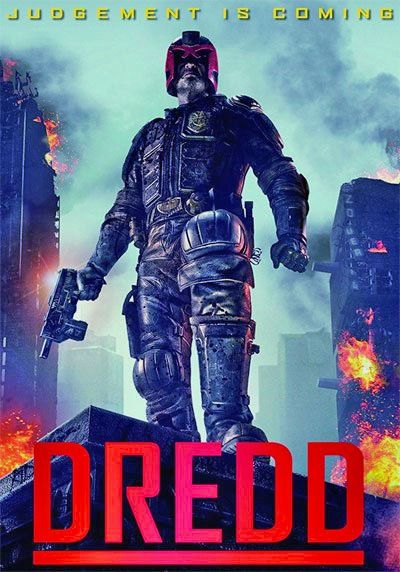 For all fans of old-fashioned action movies and dystopian sci-fi, 2012’s Dredd is definitely among the top choices.

The story takes place in a hypothetical future where only one city, Mega-City One, has survived in all of America.

This giant metropolis, indeed, is the last bastion of civilization to survive nuclear devastation.

The old cops are no longer enough to enforce the law in this billion-person agglomeration.

Society creates a new force to maintain order throughout the city, the judges. They incorporate every branch of law enforcement, hunting down criminals and then judging and sentencing them directly on the spot.

It all begins when the most brutal and incorruptible of judges, Dredd, enters an apartment complex to investigate a triple murder.

He is not alone, yet working alongside him is a young psychic recruit who can read other people’s thoughts.

Of course, the job immediately takes a turn for the worse. Criminals react violently to an attempt to arrest a suspect, completely isolating the building and trapping Dredd and his partner.

Under the command of a ruthless woman atop this 200-story behemoth, the war against her army of drug dealers begins.

Their fight is not only out of hatred for the judges, but they wish to protect a new sense-slowing drug called Slo-Mo.

At that point, Dredd must exploit all his experience and all his futuristic multifunction gun bullets to get to the top.

While at his side, the young girl, still innocent and naively eager to do good, will eventually have to ask herself if this is the job for her.

Talent is more important than a high budget

After the lousy movie starring Sylvester Stallone in 1995, any other Dredd could only do better, as this 2012 reboot succeeds.

I’m not saying that it is a small independent movie; on the contrary, the budget was over $50 million.

An investment that many admirers of the comic book appreciated in soul and style. But unfortunately, it did not pay off at the box office, grossing just a little over $40 million.

Some time ago, there was talk of a hypothetical sequel or a TV series, but since now, nothing has arrived.

Sometimes I struggle to understand this production logic. Dredd is a comic book character who has always had his fan following. Any sequel or even a further reboot, whether good or bad, would therefore have an assured audience.

If rumors are true, I hope it will continue on director Pete Travis‘ path under the excellent Alex Garland‘s supervision.

They created the spirit of futuristic decadence that the movie with Stallone had failed entirely to do.

Moreover, the plot works perfectly following the canons of 80s action films such as Assault on Precinct 13 or Die Hard.

The movie is ready and done by locking the heroes in a dead-end place with several good script ideas and excellent direction.

There is no need for anything else, precisely what big, successful productions often fail to understand.

With arrogance, they bury anonymous characters under millions of dollars of special effects and ultrafast editing.

Especially for action movies, it is much better to stick to the essentials, especially when it’s consistently good, as in this 2012 Dredd.

Once upon a time, in the distant future

Pete Travis and Alex Garland do an outstanding job of directing and writing, building a miniature world within a larger one.

Although they don’t have the special effects or Armani armor of the 1995 film, what matters is substance and not the outward appearance.

Mega-City One‘s environment is grimy and lit by striking green or red lights. An almost poor industrial look that is, however, just as delightfully high-tech.

So do the characters’ costumes and faces, starting with Dredd’s fierce faceless mask.

All we see of him is the clenched jaw of Karl Urban, strongly desired by the production. It is not easy acting with a perpetually fierce grin mouth, yet he manages to be strong and convincing.

Much more interesting is the character of Olivia Thirlby. Indeed, the mind-reading girl is not inhumanly determined to impose the law on the world.

Although she seems weak, she will stand up to the stubborn and unstoppable Judge Dredd.

As with other action movies, with a decent villain, half the work is in place, and 2012’s Dredd is no exception to this rule.

Indeed, Lena Headey is also outstanding and beautiful as a female crime boss with a disfigured face and soul.

Many of you will remember her in 300 as Leonidas‘ wife, defending his honor during the Thermopylae Persians‘ battle.

I had not particularly enjoyed that movie, which was improbably stupid. Yet the actress stood out as a female presence in an exasperating male hormones world.

Instead, I immensely enjoyed this remake of Dredd, which I recommend collecting since it will probably remain unique.

But this is my opinion, and, unlike the ruthless judge, I am not the law for anyone.