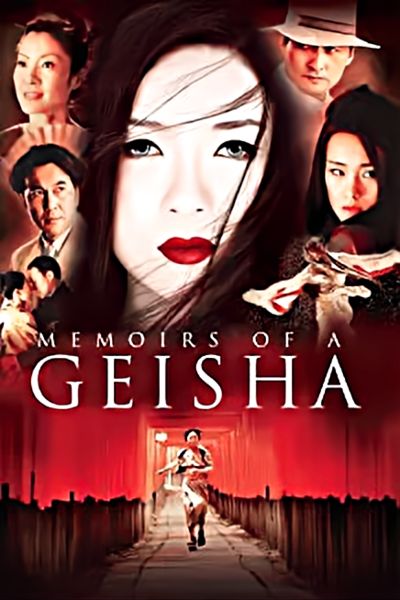 For anyone searching for a movie to relive the atmosphere of Japan before the Great War, 2005’s Memoirs of a Geisha is one of the best choices.

The story begins with an innocent child; sold like a commodity by her father after the dramatic mother’s death.

Too young to be a prostitute, she begins working in the city’s most desired geisha house.

Among these artists of seduction, the most sensual and aggressive is also the likely successor to the mansion’s ownership.

Right from the start, she immediately despises and degrades the newcomer; being intelligent, and sees her as a potential rival.

However, a prominent businessman in the city notices this little girl’s beautiful eyes. Seeing in her a possible future geisha without peers, he then tries to help her.

Years pass, and thanks to a more mature teacher, the child becomes a beautiful girl taking lessons in various arts.

The teacher trains her in dance, music, and conversation; teaching her how to become a living work of art literally.

As a new geisha, it does not take her long to build a reputation. So she re-approaches the elegant gentleman she met as a child.

Unfortunately, World War II also arrives in that time-forgotten hamlet. All their lives change as the bombs start raining down and the army invades the streets.

At that point, all rivalries between these women become secondary. Indeed, starvation and misery from the war hit Japan hard, and the important thing becomes to survive.

A distant world of forgotten beauty

I saw Memoirs of a Geisha years after its theatrical movie release in 2005; during an evening with some friends and much confusion.

Because of this, I did not listen much to the dialogues without understanding much of the story. However, I was completely fascinated by the costumes, the staging, and the beautiful Asian actresses.

However, I am completely enthusiastic only about the first half of this story. From the beginning of the war onward, unfortunately, everything becomes a more boring and monotonous drama.

I do not mean to say that it comes to be wrong; that would be unfair and, indeed, wholly untrue.

Much of the charm and magic lies in the world of beauty in which these girls live and the spice of their rivalries, which at times go as far as hatred.

This golden bubble is isolated from the outside world, where most people live rough in almost complete poverty.

Inside the walls of these houses, the mistresses work on the girls, molding them like clay; teaching them how to move, talk, walk and dance.

Geisha are not mere prostitutes but artists who devote their entire existence to maniacally cultivating beauty and harmony.

Their job is not to have sex with a client for pennies; instead, they must create a dream world of elegance and poetry in motion.

Of course, the latter part of the story lost this charm with the arrival of war; which ravages in time with the march of the soldiers everything in its path.

A major All-Eastern cast for an American director

Personally, I have always found Rob Marshall to be an ordinary director; someone who knows how to do his job but without impressive peaks in his career.

Memoirs of a Geisha from 2005 remains his best film, along with Chicago from a few years earlier. The latter, however, is a musical, a genre toward which I have a personal reluctance.

Nevertheless, Marshall proves that he can handle the high budget, lavish costumes, and sets. Especially in the first part of the story, it provides a spectacle that is pure joy to behold.

Equally important are the superb actresses in the cast, great Oriental pearls, among whom stands out the dazzling young Zhang Ziyi.

The actress was already famous for Crouching Tiger, Hidden Dragon, a major international success, and even more fantastic in Wong Kar-Wai‘s superb 2046.

That movie featured the equally talented and beautiful Gong Li, definitely my favorite actress in this whole thing.

It is unfortunate that his character is lost almost without a trace in the final part. Indeed, his twisted, evil soul was the perfect contrast to make all the rest of the cast stand out.

More mature and wise, however, is Michelle Yeoh, who becomes the mother/teacher of young Ziyi. She teaches her how to charm men and respond to the low blows of rival geisha.

Finally, we have Ken Watanabe, a great actor suitable for any role. Unfortunately, he does not get too many minutes in this film, despite being an important character.

In short, as you see, Memoirs of a Geisha from 2005 is a high-budget, talented movie; which not surprisingly grossed over $160 million worldwide.

But time goes by, and some of you may have missed it, and perhaps those who already know it may want to see it again.