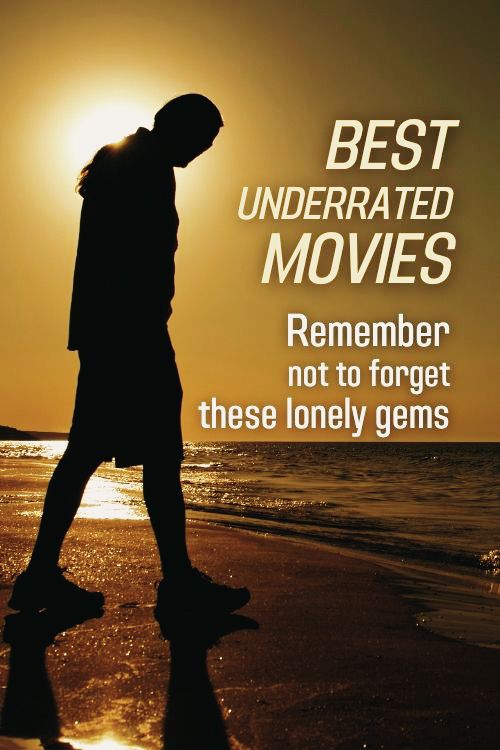 Outside of every commercial and cinematic logic live the underrated movies, as even the best work is not always a guarantee of success.

Sometimes a film happens at the wrong time, or it simply falls victim to lousy distribution in theaters.

While sometimes is a minor blip in a director’s filmography, others it is just the end of a promising career.

Thousands of new films come in theaters every year. So it is easy for the underrated to end up buried under new releases, maybe the best box office hits.

Today we dig out of oblivion three famous directors, giving them at least one day the bright light they deserve.

Three movies for different genres, trying to help all of you in the audience. Indeed, even depending on your tastes, you may discover something you may have missed over the years.

We begin by recommending an underrated movie with noble origins. Indeed we can say among the best in the genre.

As in those two famous films, the story takes place in a desolate border town. In this case, it is between Mexico and the United States, during the Prohibition period.

The few decent people have long since fled, leaving complete control to two criminal gangs hating and fearing each other.

What remains of the police force is entirely indifferent and corrupt on both sides of this trench for alcohol control.

Amid this war, the stranger John Smith arrives from the north in his car. Without wasting time, he immediately meets with hostility from local criminals.

To set the record straight, he immediately challenges the town’s best shooters to a duel, killing him without fail.

Both gangs woo him to serve in their ranks, admiring his incredible skill with pistols.

However, he has his plan to deal with the situation. Indeed, he wants to make the most of his temporary domicile in that godforsaken place.

Thus, he begins to sow tension and suspicion among these murderers, driving them to kill each other.

Except when he helps a beautiful woman, kept as a slave by one of the bosses. Then, against his plans, the gunman will be at the center of the conflict.

Plenty of style and action in an old-time western

Last Man Standing is amid the best underrated gangster western movies with an admirable style and an incredibly evocative atmosphere.

Every directorial choice is state-of-the-art elegance and classicism, with editing that is very fast-paced and modern.

The kinetic dance of the unstoppable hero with two guns is an homage to Eastern cinema. For example, as are the films of directors such as John Woo, Dante Lam, and Tsui Hark.

Bruce Willis is the tough foreigner who swoops into town to break the rules, subverting the established order of criminals.

But so unbeatable is he with guns in his hands, so weak and useless is he once disarmed, thus remaining a human-sized hero/anti-hero.

Instead, playing the two bosses in eternal, restless struggle is David Patrick Kelly and Ned Eisenberg. Both actors are familiar with the director, having already been in some of his previous films.

But above them all, even the leading man towers a superb Christopher Walken, an equally dangerous gunslinger who is the hero’s mad and lucid nemesis.

Walter Hill directs what sadly is his last western. At least in theaters, mind you, since he will later return to television with the acclaimed Deadwood series.

The director’s technical skill is by no means in question, nor is the dramatic commercial failure of this film.

Many critics have never forgiven it for being inferior to Sergio Leone‘s A Fistful of Dollars, although that was an almost identical copy of Akira Kurosawa‘s Yojimbo.

But regardless of its origin, Last Man Standing remains a highly entertaining, aesthetically unquestionable action western and the best resounding flop of these underrated movies today.

From a western about the harsh life of the criminal frontier, we now turn to a fantasy suspended somewhere between dream and thriller.

The Lovely Bones features a young girl who ends up murdered by a vicious pedophile who lives next door to her house.

Once dead, the girl remains suspended in a limbo similar to a fantasy purgatory with the other victims of the same killer.

This world is beautiful and frightening, relying on these little girls’ imagination and their last painful moments of fear.

As time continues to pass, the girl watches from afar as her family tries to recover after her tragic disappearance.

The father and mother are wracked with grief and separate, while the police cannot find any clues to the murder.

In addition, his sister begins to suspect their shifty neighbor, eventually attracting his attention.

Inevitably, the killer’s predatory instincts come back to haunt him. Even the little girl knows them, living in purgatory populated by the ghosts of his murders.

The man tries to pretend to be harmless, but in his frenzy, he also begins to devise a new plan to kill his last victim’s sister.

Despite being stuck with no way out between the two worlds, the girl tries to warn and help her family in every way before it is too late.

The Lovely Bones is a splendid afterlife visual poem; a gem of grace combining children’s imagination with their terror of the unknown and loneliness.

This tale is an enduring dream of passion mixing supernatural, horror, and romance; blending together with high-tension thriller moments and a touching family drama.

Saoirse Ronan is a beautiful young actress who plays the lead role of a ghost who cannot go any further. A little girl with a heart full of remorse, fears, and anxiety about the condition her family is in.

Unusually, given his career as a comic actor, Stanley Tucci is a fantastic villain playing one of his best roles ever.

Devoid of any emotion, this cold and organized killer, almost as if he were an accountant of death. What drives him are solely his instincts; perverse, unstoppable impulses that he indulges cyclically over the years.

Finally, the cast that makes up the family grief-stricken by the loss of their child is excellent, beginning with Rachel Weisz and Mark Wahlberg here as wife and husband.

Later they are joined by grandmother Susan Sarandon; who will be the only one, along with young Rose McIver, who keeps her head on her shoulders.

Peter Jackson directs with perfect technique serving his enormous imagination; insisting firmly on this project he has wanted to do for many years.

Perfectly alternating drama, fantasy, and thriller; the director creates something unique that we have rarely seen before in theaters.

Although underrated, this movie was one of the top box office grosses of that year. Unfortunately, it did not earn enough to cover its high budget costs.

It was an unexpected disappointment after the international success of The Lord of the Rings trilogy. Indeed, a world to which the director immediately returned with the new saga of The Hobbit.

Finally, we close with a fascinating sci-fi movie by one of the best but most underrated directors of this last generation, Neill Blomkamp.

The story takes place in a South African city of the near future. War androids have almost completely replaced the police, trying to quell violent and dangerous local crime.

During a raid against a group of robbers, one of these robots ends up badly damaged; later being commandeered by a scientist for his experiments.

The man wants to experiment with a revolutionary type of sentient artificial intelligence capable of learning. His bosses, however, are strongly opposed, seeing no use in their war products having feelings and emotions.

However, he goes to a bad part of town and secretly activates the robot. Yet some local thugs steal it from him, intending to exploit it to carry out some robberies.

Thanks to scientists’ new programs, the machine becomes more and more human. At first, he is curious as a child and becomes attached to these criminals as if they were his family.

Even the criminals begin to feel as if they were his parents; yet despite this, they still want to use him to rob an armored car.

In addition, a colleague of the scientist, his great rival in the company, discovers his little experiment. Seeking success, he sees an opportunity for his remotely guided assault mechs to prevail over the autonomous androids.

So he organizes a plan to disable all the robots in the city and unleash panic.

At the same time, the robot becomes increasingly aware that it has little to live for. In fact, its battery is running out and, since it is damaged, it can no longer replace.

Chappie is one of the best recent sci-fi action, being a movie that is unfortunately as good as it is underrated.

Above all, an engaging and highly believable social and technological context differentiates it from other movies.

Sharlto Copley is excellent at giving life and voice to the artificial being; which grows from a child in a metal body to an unstoppable street gangster.

This robot puppy discovers all too soon the cruelty and intolerance of humans toward all that is different.

Dev Patel is his first father, the enlightened scientist who would like to do good for the world, unlike his company.

Very amusing is the dysfunctional family of criminals who kidnap the robot; then raise and care for him as if he were a child.

The father is the evil (but ultimately just naive) face of Watkin Tudor Jones, while the sweet and protective Yolandi Visser is his gangsta mom.

Finally, Hugh Jackman divests himself of the hero’s shoes to play a slimy corporatist, along with cynical businesswoman Sigourney Weaver.

If I had to make a criticism, I might wish for more scenes for more background to these characters. I think they had the potential to be even more bastards and effective.

As usual, Neill Blomkamp writes, directs, and produces a movie about racism and social inequality, like in District 9 and Elysium.

I am happy to have finally seen a film by the director after a long time, a thrilling horror Demonic. I sincerely hope he returns to intelligent entertainment science fiction, which is surely his best ground.

At least, he has returned to filmmaking, and his work is no longer only a few sporadic self-produced YouTube videos.

Trespass – A Simple Massacre To Found An Old Treasure