Trespass – A Simple Massacre To Found An Old Treasure 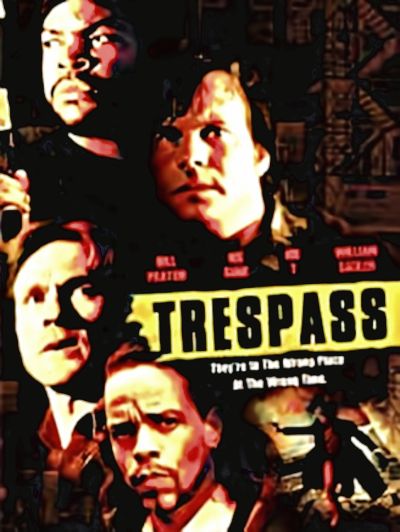 Trespass is one of Walter Hill‘s lesser-known movies, as it was released solely for TV in 1992.

However, it was perfectly on the same level as the other cinematic productions of the great American director.

The story is about two great friends who work together as firefighters. It all begins when they fail to save from a terrible fire an old clergyperson, who dies desperately seeking forgiveness.

Unable to understand his actions, they rummage through his belongings, making an incredible discovery. Long before, he committed a sensational theft from a church, stealing gold Greek relics worth more than a million dollars.

Thinking they are holding a valuable treasure map, the friends travel from Arkansas to distant St. Louis.

The old church, however, is now gone, and in its place is a warehouse, also abandoned for many years.

Once inside, the search begins, scanning the upper floors with a metal detector for gold.

Instead of gold, they find a homeless man attacking them, thinking they are trying to steal his few belongings.

Someone else arrives in the old warehouse and immobilizes him by tying him to a chair.

A dangerous gang of drug dealers has chosen that isolated place to kill a traitor.

The friends witness the murder, taking the gang leader’s son hostage and then locking themselves in a safe room.

At that point, a long standoff begins between the criminals and the treasure hunters, who would like to get out alive, perhaps even finding the precious missing gold.

Direction and screenplay at the top of the scale

As mentioned earlier, Trespass is a movie that could perfectly have made it to theaters in 1992, considering its excellent cinematic quality.

Not surprisingly, in addition to Walter Hill, we also have the great Bob Gale and Robert Zemeckis writing the screenplay.

The unforgettable Back to the Future trilogy creators writes a remarkable story of greed and urban violence.

The first thing to consider is the moral ambiguity of all characters, ready to betray anyone for power and money.

This applies not only to the criminals but also to the two protagonists in a less obvious way.

Although they are supposed to be heroic firefighters, they repeatedly perform reprehensible acts during this adventure, even among themselves.

Even the poor bum, whom we initially mistake only for a hapless human derelict, will finally get his chance to show his true character.

Against this metropolitan backdrop of moral decay, the movie becomes a modern western with colorful noir and action tones.

The pace never leaves a dull moment, and the style and virtuosity are of a high standard despite the poor production.

From all these ingredients, we have a delicious cinematic dish at the hands of some of their generation’s best directors and screenwriters.

Since this is a story where the clash of characters prevails, the choice of cast is as essential as ever.

We have the excellent William Sadler and Bill Paxton, often used in secondary roles but this time as absolute leads.

From an honest position, the two firefighters fall increasingly into the vortex of violence beyond their control.

Both need it to settle personal situations once and for all with girlfriends or for alimony with their ex-wives.

However, next, they clearly continue because of their greed, having tasted the dream of wealth by seeing all that gold.

Leading the crime squad instead is Ice-T, who may not be the best actor in the world but still has the right face for the role.

In this case, he is an impeccably dressed boss in a suit and tie, always discussing business with his cell phone.

However, he does not fail to be brutal and quick when the situation calls for it without getting into too much trouble using a gun to solve problems.

Among all his henchmen, the relationship of the trigger-happy boss played by Ice Cube is exciting.

Their contrast will be a dangerous crescendo of instability within the gang, leading to the (literally) explosive final act.

Equally good is all the rest of the cast of Trespass, which takes well-known (but not too familiar) faces from various successful 1992 movies.

So, to recap quickly, what does 1992’s Trespass lack compared to other movies?

Other than better theatrical distribution and marketing, it lacks absolutely nothing.

The movie further confirms the talent of a great director who has made his mark on the history of American cinema.

So whether you love 90s action or not, run out and see it. Unlike the protagonists, you will not regret going on this adventure.

The Home Doctor – Practical Medicine for Every Household

Love or hate – Movies about...