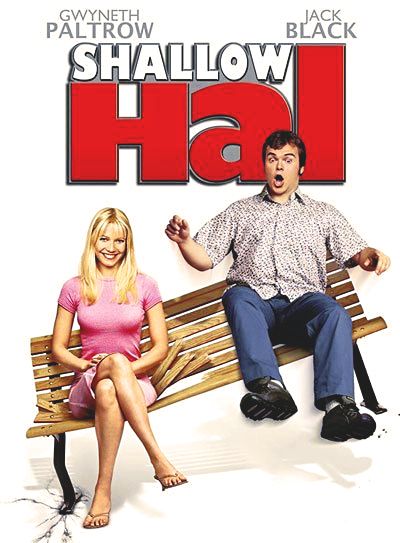 Shallow Hal is a 2001 blockbuster movie; which humorously pokes fun at the fixation on outward beauty versus people’s true nature and personality.

Indeed, the story begins with a boy who behaves stupidly and superficially with less beautiful girls; even though deep down he is a good guy with a big heart.

However, when it comes to his affinities with women, he always finds stupid flaws so as not to have a serious relationship.

Until one day, during a power break in an elevator, he meets a famous TV show guru; who gives him a gift by conditioning him with hypnosis to see the true inner essence of girls.

From then on, he will see women as beyond appearance; although he does not even realize it at first.

He then begins to have adventures with some girls he previously would not have even looked twice at; finding it strange that girls he sees as beautiful would take such an interest in him.

With his obsessive pursuit of aesthetic perfection gone, he finally finds true love; meeting a shy, lonely girl who is exceptionally overweight.

However, his best friend does not see her as he does; beginning to worry as he fears she is losing her mind.

At that point, he tries to convince the TV guru to cancel the hypnotic conditioning; so that he can see whom he is getting together with.

Although the truth may be cruel, only when the two lovers see each other face to face will they know whether their feelings are genuine or an illusion.

Appearance is everything… or not?

Incomprehensibly, Shallow Hal was also a heavily criticized movie in 2001; arguing that casting a beautiful leading lady like Gwyneth Paltrow was hypocritical to be against outward beauty.

Beyond the obvious choice of a famous star to attract the audience; I find it to be a delightful simple comedy full of misunderstandings and funny sketches about appearance and substance.

The fun is all in the difference between how the main character sees the world differently from others; nevertheless, the jokes and banter are never really mean or stupid.

However, still, many have accused the movie of being cruel and unfair to obese people; which seems strange to me considering that the main character is Jack Black; who certainly did not become famous because of his athletic physique.

The story’s message is the exact opposite and does not insult anyone; stating that we must have confidence in ourselves regardless of how others see us.

Indeed we are not dealing with a perfect film, and I will quietly admit that; specific plot points are perhaps overly long, while others would have deserved more space and greater depth.

For example, the character of the best friend played by Jason Alexander; to whom I would have left more jokes and a few solo scenes, perhaps even to detach a few moments from the two star-crossed lovers.

Incidentally, his fixation on outer beauty could have been the cue for even more funny moments; playing even more on the visual misunderstanding between beautiful and ugly that is the driving force behind the story.

However, I am talking about small things in the overall economy of this movie; which does not pretend to open political debates but only to entertain and amuse; succeeding in doing so very often and even intelligently.

A girl for all sizes

Jack Black stars as usual in explosive comedy; albeit perhaps paying for some limitations of a script that does not allow him to be completely wild.

Certain situations could have been a little spicier; perhaps alluding less with words and showing more in pictures; allowing the volcanic actor to express himself totally with his grandiose facial expressions.

However, Black embodies with candor and sympathy a character who is not always perfect; sometimes being stupid and superficial, although we understand from the start that he has a good and kind soul.

His enormous companion we see as the protagonist who is a victim of hypnosis; admiring the beautiful curves of the sweet and sensitive Gwyneth Paltrow.

As I said before, I find the criticism of choosing a gorgeous actress to play a fat girl silly; indeed, part of the comedy comes from her and how she credibly poses to feel ugly despite appearing as beautiful as usual.

This visual and narrative short-circuiting works almost every time; perhaps becoming repetitive toward the end but never becoming overly dull.

I give kudos to brothers Bobby and Peter Farrelly in directing and screenwriting; who use the cast and plot, mixing comedy and sentiment in the proper doses.

Shallow Hal grossed nearly $150 million in 2001, turning out to be a winning movie; although of the two directors, I more appreciated earlier films; like There’s Something About Mary or Me, Myself & Irene, which were more comically fierce.

In this sense, the ending may be too politically correct; although in a context of good feelings, the directors could perhaps dare a sharper critique of society.

However, this does not detract from the value of nearly two hours of excellent entertainment; without failing to joke about the stupid aesthetic standards of modern culture.