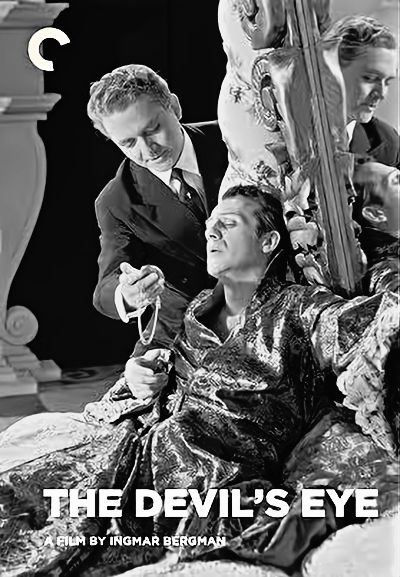 The Devil’s Eye is a movie from way back in 1960 directed by such a great cinematic master as Ingmar Bergman.

Although he is more famous for dramas in which he delves into his characters’ dark existences; the great Swedish director stages a comedy with an amusing religious background.

It all begins in the heart of hell; where the Devil has a rough time due to nasty eye inflammation.

Being immune to any kind of human disease, it is evident that his problem has another type of origin.

Indeed, what torments him is the candid purity of the young daughter of a man extremely devoted to God.

The girl is as beautiful, brilliant, and charming; however, she does not want to lose her virginity even to her fiancé, preferring to wait until marriage.

In order to succeed in making her succumb to passion, the Devil demands the famous seducer, Don Juan, to descend to earth and conquer her.

He accepts out of boredom more than genuine interest; being fed up with his circle of hell; a place where women constantly arrive who want to kill him and love him simultaneously.

In the company of his trusted friend Pablo, the man meets the girl’s father; who leads them and hosts them in his home.

Getting to know her, Don Juan discovers that she has a very libertine attitude; therefore, he begins feeling something unknown during his long years as a womanizer.

At the same time, Pablo begins to seduce the girl’s mother; who vibrates with passion despite her husband’s apathy and naiveté.

Their destinies will be fulfilled in the last long night; during which no one will emerge victorious or satisfied with what awaits them.

Are women smart as hell?

Ingmar Bergman is a director not easy to approach; considering the layering of themes in his writing and his fondness for drama that veers toward dark despair.

So first and foremost, I recommend The Devil’s Eye from 1960 as one of the best movies to begin exploring his long filmography.

On the surface, it may be a simple comedy of misunderstandings between love and betrayal. Still, the usual struggle between spirituality and materialism is present as in the famous The Seventh Seal.

The director does not forget his childhood in an oppressive and strongly religious environment; mocking heaven and hell with a handful of protagonists on a mission for the Devil.

Under the guise of treating the latter’s eye ailment, Bergman stages a series of funny and intelligent dialogues; he discusses sex and religion, love and sin, and the age-old conflict between man and woman.

If from the beginning, the girl who so angers the Devil seems a designated victim; later, the seductive beauty teaches men how to be in the world and freely be themselves.

So between God and the Devil, the director actually chooses not to choose; destroying the certainties of the most sincere believers as well as the most cynical atheists.

The most beautiful and amusing thing is that the girl does very little to resist the temptation; paradoxically, it will be the same work of hell that will push her toward goodness and marriage.

However, the Devil will still not come out defeated and will, indeed, heal her evil, basically being favorable to the intentions of the two engaged couples; stating that without the institution of marriage, hell would be a much less exciting place.

Actors and actresses from another era

The Devil’s Eye of 1960 is a theatrical construction drama, a movie that takes place in little more than two closed locations.

Therefore, the choice for the cast was crucial; starting with Stig Järrel playing a phenomenal Lucifer.

However, there is little that is satanic in his appearance; looking like an ordinary, quite elegant middle-aged man.

Behind this facade of normality, however, hides his infinite cruelty; which we see in the endless punishments he inflicts on the damned prisoners in hell.

These include a weary Don Juan and his trusted accomplice Pablo; who are the excellent actors’ Jarl Kulle and Sture Lagerwall.

After centuries of punishment in hell, they are happy to leave that dead-end limbo and return to earth.

Especially since the mission the devil entrusts them with is highly challenging; that is, to make it in a world where the angelic pastor’s daughter finally loses her virginity.

Here we come to the cast star, the beautiful, charismatic Bibi Andersson; a talented actress undoubtedly familiar to cinephiles everywhere; having starred in the wonderful The Seventh Seal and later in the equally significant Persona.

This woman unhesitatingly dominates this small world of men; bewitching them with her beauty before and afterward, cleverly keeping them in their place.

Just as she keeps the womanizer Don Juan at bay, she also deceives her fiancé; behind whose back she has already kissed 20 men and aims to get to 50 before marriage.

What more can you say about an old-fashioned comedy of this kind? The writing is brilliant, a master filmmaker is at the helm, and the actors all give their best.

Perhaps no one will remember it as Ingmar Bergman‘s masterpiece; but the 1960’s The Devil’s Eye will always be one of the movies I remember most fondly.

Watch on
The Criterion Channel