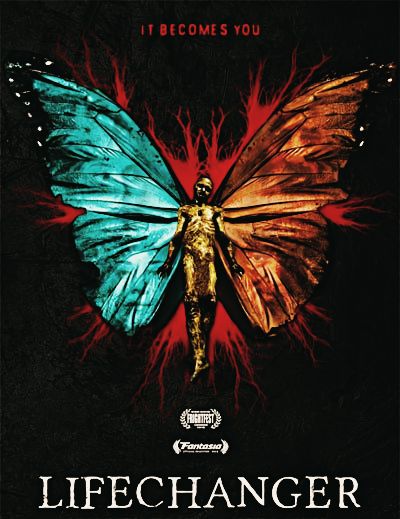 Today we are talking about a movie that is little known, but I think it is an excellent fantasy horror, Lifechanger from 2018.

The main character is a humanoid creature who has been living among us for a long time; appropriating the life and identity of different people from time to time.

He tells us about his life as the narrator of the story; explaining that he, too, was once a human being.

However, in his youth, he discovered that he could change his appearance whenever he wanted; simply by touching other people.

Unfortunately, this transformation is brutal and kills the victims; leaving them inert as wrappings horribly drained of all their essence.

Transitioning this essence allows him to physically become identical to them and absorb their memories, emotions, and knowledge.

After a long time of living this life as a parasite, he realizes is reaching his natural limit; finally beginning to think that he is not as immortal as he thought.

Each time he transforms his body, the period in which he can maintain the new appearance lasts less; forcing him to look for more victims in an increasingly reckless and unwise manner.

In this race against time, he wheezingly commits more and more murders; leaving behind a trail of corpses that are increasingly difficult for him to hide.

The creature thus finally resigns himself to the fact that he has now reached his last days of life; deciding to find someone very dear to him and confess his sins.

In his last bloody journey through the city, he goes from one body to another relentlessly; desperately searching for a woman who had been and still is his one true love.

A story that really is a lifechanger?

Lifechanger is a small but original 2018 movie with a constantly changing protagonist; who changes his face before our eyes as he follows his narrative voice.

However, this monster is not evil or sadistic; he just tries to survive by switching to another body when he reaches the limit.

Nevertheless, the result of his actions is undoubtedly monstrous; he destroys the families of everyone he meets in his path.

There is quite a diverse cast through all the characters who have the misfortune to cross paths with this creature who cannot avoid attacking them.

A woman played by Lora Burke is the only constant in its life; whose husband, by the way, was one of its many victims long before.

The creature courted this widow behind many different faces; so he knew every detail of her life.

Sadly aware of her condition, he feels the need to find her again; to tell the truth, he has never told anyone until now.

His primary need is simply the hope of finally being accepted and loved; even though human beings ignore the existence of a creature like him.

So all of his cruelty stems from loneliness and a desire for a normal life; instead, he has to live only small portions of other people’s lives before changing.

As I said, not many people know about this 2018 movie, but I think it can be a Lifechanger, not only in the title but especially for aspiring filmmakers.

So many faces for just one character and one story

Justin McConnell writes and directs this personal drama of a supernatural being; whose morals are not so different from our own after all.

The flow of the narrative from one passage to the next could have been challenging to manage; however, with each character switch, the story becomes more precise and understandable.

For once, we have a horror film where we can empathize with the monster; despite the numerous murders and his certainly not ethically blameless behavior.

Indeed, we can often see him as a victim, an intruder in a world where he can never have friends, love, and peace for his cursed soul.

This unfortunate monster remembers almost nothing of his old life; absorbing other people’s dreams and desires every time he changes his appearance; he has long since lost his true self.

Despite having enormous power, his is a miserable existence without purpose or conception of his past; living by simply trying to survive until the next day.

Lifechanger was released in 2018 and, unfortunately, has remained a movie about which little or nothing is said even online; a shame for an original story that deserved more attention.

Obviously, the film suffers from a low-budget production and the lack of famous actors; however, it is definitely unique in telling a non-trivial horror story with an unexpected ending.

The Client – A Thriller So Funny It’s Almost Illegal