On the couch together – Movies you can watch with family 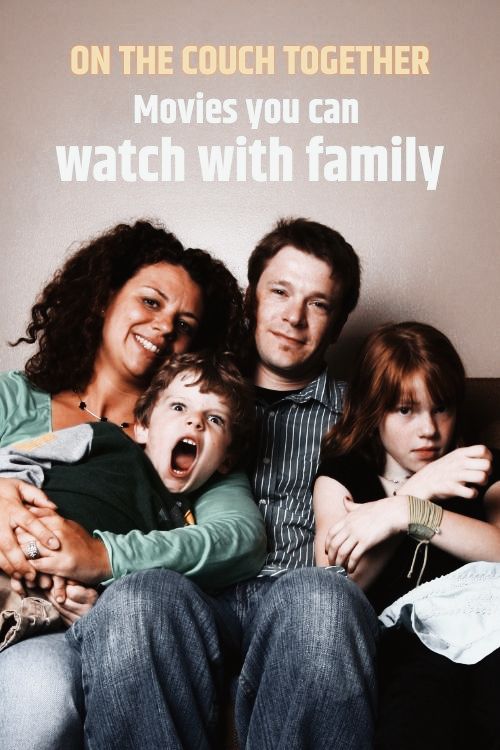 Do you really want to underestimate the importance of watching movies with your family?

After a hard day at work, we sometimes come home tired and depressed, so finding time to relax with family can be challenging.

However, spending time with loved ones is not only for our personal pleasure but is a great way to create bonds and memories that last.

In addition, closeness and presence, especially with young children; help them feel valued and protected and teach them how to behave when they relate to other people in the future.

Watching a good movie is one of the quickest and easiest ways to stay with family; this gives everyone a chance to relax and focus on the same thing.

It also provides an opportunity to create exciting conversations afterward; sometimes leading to amusing observations about how different our tastes are.

Indeed, whether it is a simple comedy or a more challenging film, everyone always has something to say about a movie.

But as we always know about a family, finding a movie that everyone can agree on can be difficult.

Be that as it may, don’t worry; we’ve got it covered; actually, that is why we are here.

We begin with a fantasy comedy that many people usually recommend during the winter season; being loosely based on Charles Dickens‘ famous A Christmas Carol.

In place of the grim old Ebenezer Scrooge, we have an amusing Bill Murray; who reinterprets the role by becoming the big boss of a major TV network.

No one can tell him how to handle his job; for years, he has pushed friends and loves away, sacrificing all affection for his career.

But one night, the ghost of his old boss bursts into his office; the decaying apparition warns him that he is now at a crucial crossroads in his life.

He rejects the threat and mocks his friend’s spirit, believing that it is all over and was a hallucination.

The next day he has already forgotten everything, preparing a big Christmas show about Dickens’ novel; unaware that he will see three more ghosts.

These ghosts will take him back and forth in time, again on Christmas days; visiting what was in his past to how he lives now in the present.

His day will be a succession of delirious moments between appearances; while his colleagues and friends obviously believe he has gone terminally insane.

Overwhelmed by events, the businessman’s withered heart will finally begin to beat again; reconnecting with his brother and a girlfriend he has not seen in a long time.

However, losing a lifetime of habits will not be easy; as midnight approaches along with the last ghost; someone everyone fear, the black hooded figure of Christmas future.

Merry Christmas all year round

Scrooged is one of Richard Donner‘s many hits in his heyday; we are talking about the years from the 1970s to almost the late 1990s.

This horror-comedy arrived between the first and second Lethal Weapon; garnering over $60 million worldwide at Christmas time alone.

In addition to the furious pace and hilarious gags devised by the director, the film can count on an irrepressible and undisputed Bill Murray.

The great comic actor plays a merciless capitalist showman; who exploits his employees almost to the limit of psychopathic sadism.

It is a pleasure to watch the various ghosts as they tear him apart; beginning with singer David Johansen who takes him on a cab ride into the past.

Next, we come to the present with the innocence of Carol Kane; angel-face who beats the crap out of poor Murray as she shows him the family celebrating Christmas without him.

The funny moments are several, which are alternated, almost surprisingly, with some absolutely unremarkable horror bits.

In this sense, we reach the peak, of course, with the arrival of the Ghost of Christmas Future; an iconic metaphor for death that the bewildered TV manager mistakes for an actor on his show.

But don’t worry, there is nothing to upset your children; I would say that overall it is indeed a very educational movie you can watch with your family.

The lesson is simple, you should not seek success at the expense of everything; what good is it to be rich and famous without loved ones in your life?

From an entertaining story of ghosts and good feelings; we now move on to an exciting plot of international conspiracies and acrobatic thievery.

It begins with a notorious former thief, called The Hawk, getting out of prison after a long 10-year sentence.

The man would like to put it all behind him, starting over in peace and running a pub with his old accomplice.

Unfortunately, a bunch of criminals set him up with his partner; forcing them to steal a rare antique sculpture from an auction house.

The heist succeeds, but for the two friends, it is only the beginning of a long adventure; flying to Italy to arrange another heist even in the heart of the capital.

Behind this series of thefts is a megalomaniac billionaire; who, together with his estranged companion, wants to reconstruct an ancient invention by Leonardo Da Vinci.

As if that were not enough, trouble in the equation is joined by a series of corrupt CIA agents; working side by side with a mysterious secret Vatican organization.

Among them is an art expert who falls in love with the Hawk; but simultaneously wants to prevent him from stealing a valuable artifact from the ancient Roman Church.

The forces at play will converge on the hapless thief and his friend; into the madness of double and triple betrayals between the groups.

When all the pieces for the invention are finally together, it will be the better cheater who wins the endgame.

Rarely do I get to watch adventure movies nowadays, at the same time have a fun sense of humor we can say is even demented for all family.

I never understood why Hudson Hawk failed so resoundingly at the box office; costing over $60 million and then grossing less than $20 million.

Michael Lehmann does well in handling this large budget; despite being a director of mostly television experience.

The action scenes are structured to be entertaining and spectacular; with some musical moments where Bruce Willis and Danny Aiello sing to the tune of the great Frank Sinatra.

Equally hilarious are the group of CIA agents; a stoned Mission Impossible-like handful led by the 64-toothed grin of a fantastic James Coburn.

Also, if you look at some romance, there is a gorgeous Andie MacDowell; a former model and actress adding sunny delicacy to a recipe already abounding with emotion.

Put it all together, and we have on our hands a strange film that is more unique than rare. However, it is certainly not a masterpiece and is far from cinematic perfection.

Nevertheless, it is something that nowadays I doubt Hollywood would dare to produce again; a mixture of a heist movie and espionage; closer to the demented Austin Powers than to 007.

Surely if you happen to see it with your family, someone will jump up and say it is garbage; yet I am sure that they will all have a great time watching it together.

Finally, we came to one of the movies I loved most in my youth; talking without a shadow of a doubt about a damn masterpiece.

Picking up on Woody Allen‘s idea for The Purple Rose of Cairo; John McTiernan directs a story where an action movie character leaves the screen to come into the real world.

Instead, to be precise, it is one of his biggest fans who first enters his fictional world; thanks to a magic ticket he got as a gift from a friend who works in a movie theater.

Just as in his dreams, this young boy will find himself side by side with Arnold Schwarzenegger; trying to foil an improbable criminal political plot with jokes and exaggerated action scenes.

Fights, shootouts, chases, and beautiful girls on all sides are just some of the moments in Los Angeles in this film.

At the same time, we discover, however, that the hero’s private life is not the paradise we thought it was.

As if that were not enough, the supervillain of the story will discover the special relationship between them; stealing the magical passkey that opens the door between the celluloid dimension and ours.

At that point, the child will have to guide the giant supercop into our world; a world he does not know and where it is not always the good guys who win in the end.

While trying to track down the criminal who sows panic and terror in the city; this last one decides to release to help him out of other dangerous psychopaths from the movies.

Everything converges toward the inevitable duel at the premiere of the next chapter in the hero’s adventures; where he will also have his face-to-face with the real Arnold Schwarzenegger and his wife.

A career prematurely over?

So much pleasure do I take in recommending this film, equally, so I am sad to see a director as great as John McTiernan disappear into thin air.

An auteur of great 80s action films we all loved like Die Hard, Predator, or The Hunt for Red October; of which countless sequels were made between low and high quality.

Sadly, his career crashed against a year in jail served in 2007; dropping off the film industry’s radar for good.

Last Action Hero represents the pinnacle of all that is his cinema; combining irony and a sense of spectacle with his innate eye for cinematography and stylistic perfection.

Obviously, no one could have played this action hero better than Arnold Schwarzenegger; cleverly ironizing the role he played his entire life.

Along with him is the likable and very young Austin O’Brien; who came from The Lawnmower Man and seemed headed for success; except that he too disappeared into the limbo of lost careers.

Impossible then to name the family of stars we watch in the movie; such as Sharon Stone and Robert Patrick, to name a few; who makes an amusing Basic Instinct and Terminator 2 cameo for a few moments in a scene in front of the police station.

Who knows, perhaps it is true that McTiernan’s career was on the wane anyway, given the horrendous and pointless remake of Rollerball. Yet, I am convinced that this director still had some excellent cartridges to fire.

But today, it seems we can never be sure; so let us enjoy what remains of his long and prolific life as a filmmaker; at least as long as they allow him to work.

The Limitless Flow – How To Rap Freestyle For Beginners