The Witches Of Eastwick – A Love And Horror 80s Blockbuster 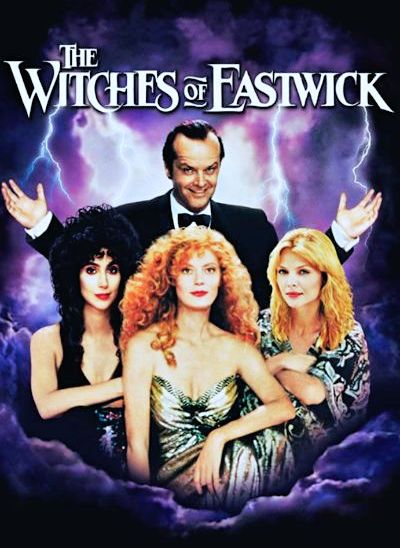 The Witches of Eastwick is a stunning 1987 horror comedy directed by the great George Miller, creator of the famous Mad Max saga of movies.

It begins with three lifelong female friends in the quiet town of Eastwick; each has her own regrets and dissatisfactions.

Wishing for something to radically change their lives, one evening, they invoke a supernatural creature that embodies every characteristic of the man of their dreams.

Indeed, although they do not realize it, the women are witches who have never become aware of their powers.

The next day, an eccentric figure arrives in town; a man Smart, rich, and full of charm.

One by one, the mysterious newcomer wins the trust and love of all three women; also helping them to be free in ways they could not have imagined.

Having found their paradise, the friends move together to the vast and luxurious mansion of this demon; who teaches them magic and sorcery.

But they soon realize that they have made a pact with a demonic being, capable of anything, to give birth to his diabolical offspring.

They then decide to leave him all at once; returning, albeit with some sadness, to their former lives.

The infernal being takes this abandonment very badly; taking revenge against each of them by exploiting their worst fears.

Their great love becomes a nightmare to fight at any cost and by any means, whether on this earth or not.

Feminism can be horror?

Despite the theme of the demon father and master seducing his victims, I would say that The Witches of Eastwick is definitely one of the most feminist movies of 1987.

How reconcile a 1980s woman to be free; whether in work, religion, sexuality, or the lack of a traditional family?

However, the freedom of these women is inevitably reflected in their unhappiness; with a society rejecting their social status as divorced spinsters.

With the demon’s arrival in town, all the cards in the deck are reshuffled; subverting every rule of everyday urban life and the very laws of nature.

But in reality, power has always been there with them, probably even before they were born; it is no coincidence that the large mansion where much of the story takes place is legend was where witches once burned.

These witches certainly do not sit idly by taking insults and abuse; taking revenge against the bigots of the town by dint of curses and indigestion scenes like The Exorcist.

Fighting repression with comedy has always been a winning choice for a director; considering that absurdist comedy can be placed in any context, such as Terry Gilliam‘s futuristic sci-fi Brazil.

Just as repression also comes from the demon man; when the latter does not get what he wants exactly the way he wants it.

Then everything he has learned about women through love turns to hate; turning intimate confessions of fear and pain against witches helpless to his power.

But are they really so helpless? This I leave to you to find out, in case you have never had a chance to see this movie; many have branded it as simply a cute movie, while for me, it is a beautiful and unique gem.

The best actors/actresses from the 80s

This fantastic comedy with horror overtones makes fun of the evil hidden in small, seemingly happy towns; mainly thanks to the presence of 3 divas led by the great Jack Nicholson.

The top Hollywood star reigns supreme over the rest of the female cast; the queens revolve around him, fueling the growing madness of the story.

Nicholson is not a handsome, muscular-bodied sex symbol; just as he is never meant to be sympathetic or condescending to anyone.

His charm lies in bringing out the true beauty and strength of these women who, after his action, become sexy bombs of freedom and happiness.

Singer-actress Cher is the first to fall under the demon’s charisma; rejecting and mocking his advances, which intrigue her until she becomes his lover.

On the other hand, Susan Sarandon is the director of the out-of-tune local small school choir; whose passion for music catches fire in a hilarious sexual violin lesson.

Finally, the shy and fearful Michelle Pfeiffer emerges from her shell by transforming into an aggressive goddess; a small appetizer of what we would later see as Catwoman in Batman Returns in 1992.

The process of rapprochement and later estrangement between the women and the demon is phenomenal; the dialogue is always clever and brilliant, bringing out the prowess of the entire male and female cast.

George Miller‘s direction is impeccable; proving that he can handle a large budget as well as the first two poor (but brilliant) chapters of Mad Max.

Would we ever see anything similar again from George Miller?

The Witches of Eastwick was a massive hit with audiences in 1987, remaining a resounding movie that has not aged a single day.

Later the director would alternate between other genres, such as the animation of Happy Feet and the drama of Lorenzo’s Oil; movies that may or may not be liked, but unfortunately, he would never return to this kind of black horror-comedy.

So let us enjoy what remains a thread of different colors in the large canvas of his career; all waiting for his return to the world of Mad Max with the upcoming Furiosa; of which the only thing we know for sure is that it will be a prequel to Fury Road starring Anya Taylor-Joy.

YOGABURN – How To Become A Light, Healthy And Happy Woman