Hotel Artemis – No Place More Easily Risky Than A Hospital 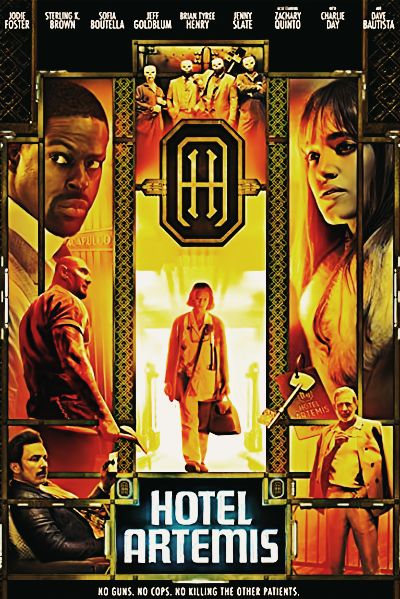 Hotel Artemis is a 2018 movie that has been primarily snubbed and underrated; although I believe it is one of the best exponents of old-school action in a modern guise.

Much of this story takes place precisely inside this hotel, located in the heart of the worst crime district in Los Angeles.

In addition to being a safe well-defended haven for those who can afford its services, it also operates as an underground hospital.

Throughout an interminable night, a series of criminals, madmen, and murderers for hire converge on this place.

Each of them has no other choice, considering that the city is in revolt because of the dwindling supply of drinking water.

Considering their antisocial personalities and violent dispositions, trouble could quickly arise; but the hotel staff knows how to keep these characters at bay.

Running the Artemis is an elderly woman, once a respected doctor; who keeps order within these walls thanks to her giant nurse/assistant.

However, even they are not prepared for what is happening.

Indeed, the most dangerous boss in town shows up at the door of the hotel; obviously followed by many of his henchmen and his unstable son.

The boss is seriously injured, and his son makes it clear without hesitation that they will all pay dearly if they do not save him.

As the devastation of the riot continues unchecked in the city, the doctor tries her best to save the criminal.

But not all his guests/patients agree for the boss to live so at Artemis, a no-holds-barred struggle to survive soon ensues.

To date, Hotel Artemis remains the only movie by Drew Pearce, who, after 2018, returned to his usual job as producer and screenwriter.

I honestly find this a shame, considering the director’s excellent result with a budget of only $15 million.

We can say that this movie perfectly sums up some of the most significant aspects of the 80s and 90s action classics.

Indeed, we have a diverse group of sketchy characters stuck in a place with no way out; like the absolute cult Assault on Precinct 13 or the less famous and by me recommended The Nest.

The coercive setting exerts pressure on the protagonists’ breaking points; turning those who looked like villains into heroes or vice versa.

Equally mysterious are the personal stories of each of them, which unfold as an integral part of the action scenes.

Moreover, another critical aspect of this type of action movie is that the action is not stupidly and continuously nonstop.

The story takes its time to get off the ground, introducing characters one at a time; whose relationships of hate and love will be the fuse that triggers all subsequent consequences.

Considering the limited budget, the fighting and shooting are mainly in the final part; where we reach the emotional and violent climax of what we have previously witnessed.

Although few in number, these action scenes are really well-engineered and have significant emotional involvement; as well as being obviously tastily violent and bloody to watch.

I can only regret Hotel Artemis‘ flop at the box office in 2018; fearing we will probably see increasingly fewer such films.

A small but very talented cast

Hotel Artemis boasts a remarkable cast that is ideally on par with other 2018 bigger notorious movies.

Prominent among them all, of course, is Jodie Foster, an actress who certainly needs no introduction; already won two Oscars and numerous awards from the international press and critics.

The big star leads the chorus as the chief doctor at Artemis; a woman with a sad past and an increasingly dark present.

She is a woman who tries to be a peacemaker among the various restless and violent souls in her hotel, strictly imposing hotel rules on her unruly guests.

But even she won’t be able to abide by her own strict regulations; bringing in and helping an injured policewoman into this hornet’s nest.

Fortunately, serving as her brute muscle is the faithful nurse Dave Bautista; a relentless big, rough man whom no one can intimidate.

Among his clients, the most interesting is the charming pair of unspoken lovers; the ironic gangster Sterling K. Brown and the beautiful and deadly hitman Sofia Boutella.

Unfortunately, a romantic relationship comes about in the wrong world and time; leading to an ending that I loved and won’t spoil.

Finally, I want to mention the boss played by Jeff Goldblum, another great actor whom we, unfortunately, see little of; of whom the best trait consists of his love/disappointment relationship with his son Zachary Quinto.

In short, this movie has everything it takes to please everyone, ensuring an hour and a half of emotionally intense action pulp.

So whether you are still skeptical or not, give it a chance; you may discover a unique little gem from a director who may never direct anything else again.

Niche site templates – How to improve your online image