Midsommar – The Scary Dance Of Cruel Destiny And Human Mind 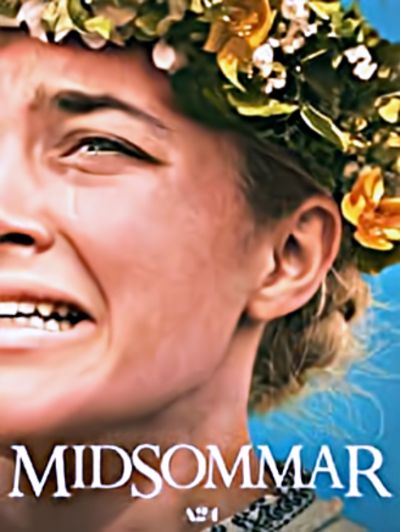 Midsommar is an original 2019 blend of horror and psychological thriller directed by one of America’s newest and most exciting movie makers, Ari Aster.

The story concerns a group of friends planning a trip to Sweden; staying in a small rural town where one of them was born and raised.

However, the trip is both a relaxing vacation and an academic opportunity; since it would allow them a study a community so isolated from the world.

In addition, the girlfriend of one of these boys is in dire need of comfort; after the terrible suicide of her sister, who accidentally killed her parents as well.

Until their arrival, they find a completely closed and self-sufficient community; but which seems to welcome them peacefully among them without trouble.

Many of them are naturalists devoted to the use of hallucinogenic drugs; as well as carrying on the tradition by performing strange rituals of pagan origin.

However, soon, these guests begin to fear the atmosphere of insane madness that permeates this way of life.

The fear then becomes terror when they witness the suicide of an elderly couple in the village; an episode that awakens in the girl the painful experience of her family.

At that point, many in the group would like to leave that place; but several setbacks seem to make their return difficult.

By the time they realize they are prisoners, indeed, it is too late to go back.

It is no accident that all of them are there; the sacred divination rite of spring approaches, claiming its human sacrifices.

But for some of them, this could be a chance for a new life; a chance to be reborn into something beautiful while everyone else will die horribly.

A promising young author with a unique and visionary style

Ari Aster writes and directs this magnificent horror thriller as a journey with no return into madness that makes no concessions to anyone.

Consolidating his style and technique, the director manages, in a way that is difficult to describe, to be both excessive and moderate at the same time.

His career had recently begun with Hereditary, his debut movie in 2018; an equally terrifying horror epic about a small cursed family.

In this short time, the director has continued to grow and improve, engaging in stories that are difficult to make; while remaining extremely easy for audiences to follow.

Not surprisingly, a movie like Midsommar earned nearly $50 million worldwide in 2019; this is a resounding success against the less than $10 million spent to produce it.

As a result, I have high expectations for his upcoming Disappointment Blvd; possibly coming out this year starring the great Joaquin Phoenix.

Returning instead to talking about today’s movie, I think many filmmakers should take me as an example of how to build narrative beats.

Much first half of this story consists of the anticipation of something indefinite; along with a few emotional jolts that always keep the creepiness high.

After that, we slide progressively and quickly into a visionary pit that contains a visionary trap of insane cruelty.

Although in soul and plot a horror film, Midsommar has unusually colorful and bright photography; an optical contrast that is all the more disturbing considering the spectacle we witness.

As is appropriate, Ari Aster takes as much time as necessary to narrate his cinema; he courageously carries out his narrative poetics as any auteur should always do.

Man and woman against, in life and in nature

Florence Pugh is perfect in the role of the weak and insecure protagonist; who is constantly tormented by psychological disorders and hallucinations.

The poor girl cannot overcome the trauma of loss; remaining stuck in grief and constantly reliving the horrible death of her parents.

After losing everything, the girl clings to the only certainty in her life, namely her boyfriend; she begins to obsess over him without ever a moment of peace.

The boyfriend, played by Jack Reynor, cannot console her and perhaps, in the end, is even too stupid to really understand her.

However, he tries to help her in his own way, putting up with everything; although his friends keep advising him to leave her and move on with his life.

Among the talents of the director and screenwriter is to delineate this group perfectly in just a few minutes of dialogue at the beginning.

It’s easy to see who favors the relationship and who has other things to think about; giving as much of a selfish crap as those who recommend a separation.

Despite everything else, I think every other event in this story revolves around these two main characters.

This is especially clear in the final part when we have a montage that alternately follows both of them as they sink into their personal nightmare (or dream?).

At that point, the roles are reversed; love becomes hate and vice versa; as the ritual comes to fruition and the grand narrative plot is revealed in its magnificent simplicity.

Midsommar is one of the best movies not only of 2019; yet I dare say among all those I have ever seen in the last 20 years at least.

His secret obsession – Show me the attraction secrets

Niche site templates – How to improve your online image