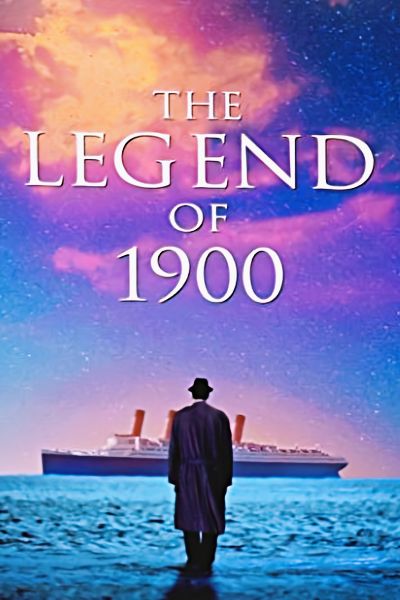 The Legend of 1900 is a spectacular naval musical 1998 movie by Italian director Giuseppe Tornatore; starring a superb and inimitable Tim Roth.

It begins with a former saxophonist who, by chance, finds an old disc in a store; which contains a recording of a unique piece played on the piano by a close friend of his.

The shopkeeper is highly interested, considering that it could be a valuable item; so the man starts narrating to him the incredible life of a pianist unknown to the whole world.

An old black laborer was employed in the boiler room of a transatlantic ship; when he had found an infant in a basket in the large first-class ballroom.

He kept him with him without knowing what to do, raising him among the other crew as if he were a little gift from the ocean.

When by accident, he died, the little baby sat full of sadness on the same piano where he had been found as a baby.

To everyone’s general amazement, he begins to play a wonderful melody; despite never having touched a single key before in his life.

Years pass and the child becomes a man; just as the saxophonist telling the story begins to work with the ship’s band.

They immediately become friends, sharing joys and victories, great and small. Still, the pianist insists he never wants to go ashore in all that time.

At that point, the shopkeeper warns him that that same ship is docked in the harbor; that is where the mysterious record came from.

Indeed, the authorities are entirely emptying it; preparing then to blow it up given its prolonged inactivity.

Sure that his old friend is still hiding on board somewhere; the man tries hard to save his life before the great blast.

When music is part of the cast

It was not so long ago that Ennio Morricone left us; among his many movie compositions, The Legend of 1900 is perhaps what I have loved most since 1998.

This does not mean it is better than the legendary music for Sergio Leone‘s westerns and other masterpieces like The Untouchables or Quentin Tarantino‘s The Hateful Eight.

I have seen this movie so many times that its melodies have entered my soul; lulling me as the waves cradle the floating world of this story.

Every song and every note played by Tim Roth‘s histrionic character has its own meaning; born and dying in small moments forming an offbeat fairy tale.

Above all, I would say I loved the excellent dueling with Clarence Williams III; who plays ‘Jelly Roll’ Morton, a musician who described himself as the inventor of Jazz.

A duel made of hatred and teasing, inflicted between the two men note after note under the astonished gaze of the audience on board.

In contrast, the piece in the mysterious store record is much more romantic and melancholy; recorded simultaneously as the pianist admires a beautiful young passenger from a porthole.

Giuseppe Tornatore exploits every second of the brilliant composer’s work; turning his own music into a living character that is part of the story.

The director had a reasonable budget, but not even that exceptional: we are talking about $10 million, a fraction of what the prominent American movie majors spend.

But his incredible talent and visual flair make it seem even more magnificent; looking like a massive Hollywood blockbuster and not a medium-small Italian production.

The cinematic deception reaches its climax when it is joined by the voices of Ennio Morricone‘s music; which is as majestic and imposing as the ocean itself.

The great elegance of poor humility

Of all the actors in this 1998 movie, the one I liked most was undoubtedly Pruitt Taylor Vince, who narrate The Legend of 1900.

His character is a pained and ironic storyteller; playing a jobless saxophonist in a world that no longer needs free souls like him.

An artist who loves his music but realizes he is only average when confronted with the pure genius of the pianist.

Through his eyes and voice, we see the wonder of a world in perpetual motion; all aboard together this strange circus that goes back and forth between America and Europe.

Just as we might say, the director inserts his Italian soul inside a very American-style big-screen movie; at least aesthetically.

In all this magnificence, we can see how Tim Roth revels in jigging as a strange and lonely protagonist; who tries to understand the peculiar humanity constantly changing in front of him.

A man who remains an eternal child, almost a modern Peter Pan with the gift of music; painting an unforgettable character with his mocking grin and wry expressions.

Although relegated only to the early part, equally funny and explosive is his adoptive father with the giant face of Bill Nunn.

He is a humble but proud worker, even blacker than he is, thanks to the coal he shovels every day; which teaches the child to read and love life with the smallest and simplest things.

From him and his saxophonist friend, the boy learns the most important lessons, for example, quoting the narrator:

You’re never really done for, as long you’ve got a good story and someone to tell it to.

Despite the grandeur and length of this remarkable ocean tale, I believe this is the director’s message.

You must love what you do, or we will have a thankless life; just as you can be the world’s freest man while spending your whole life on a ship.

The end of the 20th century represents the end of a certain kind of cinema; as we may have seen with the poor results of Guillermo del Toro‘s similar Nightmare Alley.

But as long as there is at least someone listening to our stories, it will always be worth telling them our way.

Some Tips for Actors on How to Get Started