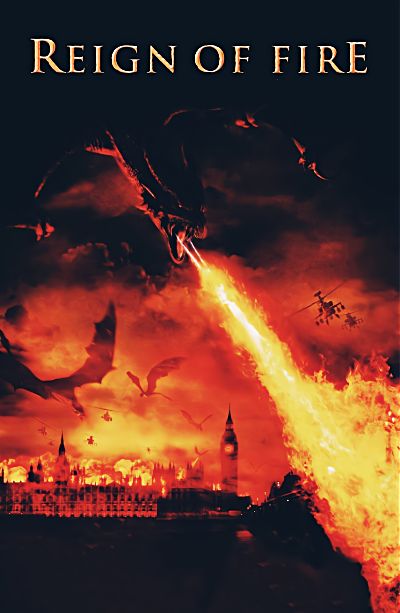 The story is about a devastated world where men are increasingly few and weak; enduring within castles and regressing into medieval society.

Indeed, many years earlier, dragons emerged from underground that had been asleep for centuries; destroying every town and every army in their path.

One such community of survivors lives in one of these fortresses in northern England; where one day, a handful of American soldiers arrive.

They have killed countless dragons all this time but have been unable to solve the problem.

Despite everything, the creatures seem to reproduce indefinitely, no matter how many the soldiers manage to eliminate.

For this very reason, their fierce commander has decided to return to England; the exact place where the dragons first appeared long ago.

The man does not know that one of the two community leaders in the fortress witnessed the beginning of the apocalypse.

When he was a child, he went with his mother to work on the London Underground; right where the first grand dragon had emerged because of some digging.

This specimen is the only male in the entire herd, so killing him could end this nightmare forever.

Unfortunately, the men also seem intent on fighting among themselves, as the leaders of the soldiers and the castle; who cannot stand each other and have no intention of cooperating.

The only reasonable person who might bring them together is a woman, one of the last surviving helicopter pilots.
If she can convince them to put aside their feud, perhaps all of humanity might still have a future.

Unfortunately, this director had a pure television career; without cinematic comparisons to other movies such as 2002’s Reign of Fire.

Indeed, the only other work of his that I remember is Elektra from a few years later; a bad comic movie despite the character having potential; as we last saw in the excellent Marvel’s Daredevil series.

In this case, however, the filmmaker really puts the generous $60 million budget he has at his disposal to good use.

The settings evoke the desolation of a broken world: from big cities scorched by monsters to smaller fortresses where humans are trying to cope.

Within them, the relationships between the various characters evolve and change according to the need for alliances; alternating between small and large confrontations between men of very different personalities.

Of course, we must give concession to some action scenes; not forgetting we are watching a movie where soldiers fight almost bare-handed against dragons.

Nevertheless, the fights manage to restore the feeling of these creatures’ unlimited power; adding just the right amount of drama to the ensuing devastation they leave behind.

The narrative is as simple and straightforward as a fairy tale; considering it is a fight against dragons in a modern guise with a very macho American style.

Tension works best in the interior scenes; in which the sense of claustrophobia and fear of these winged demons reaches its peak.

What definitely works best, however, is undoubtedly a cast of young stars who were all about to emerge.

Christian Bale is undoubtedly the best emerging; whose talent he would definitely confirm a few years later with the wonderful The Machinist.

From there on, his road to success would be paved; arriving at the well-known Bruce Wayne/Batman in Christopher Nolan‘s rich trilogy.

Here he plays a hero in search of his courage; after a painful childhood experience that marked the death of his mother and the beginning of the dragons’ rule.

On the other hand, the opposite is Matthew McConaughey, a tough-as-steel American chief; which commands a platoon of dragon-killing soldiers.

Usually, the actor never thoroughly convinces me with his performances; always leaving me with the impression that something is missing to make him complete and exciting.

However, no one denies his status as a Hollywood star; indeed, in this case, his crazy character is definitely his performance that I enjoyed the most.

Definitely more complex is the pilot Izabella Scorupco, the only female presence in this all-male world; the light of reason that will point the stubborn protagonists against the real enemy.

Finally, there is a small cameo of Gerard Butler, a long way from achieving notoriety; as leader of the Spartans in the well-known 300, not that I like that movie very much.

The actor plays the faithful and somewhat naïve sidekick of the protagonist; of whom I remember a cute little skit where he stages a puppet show with him along the lines of Star Wars.

Although I like it a lot, in 2002, Reign of Fire grossed well but not that much, placing far behind the most-watched movies of that year.

All in all, I would say that after all this time, we can reevaluate it a bit; judging this strange fantasy as a decent mix to please a bit of all movie tastes.