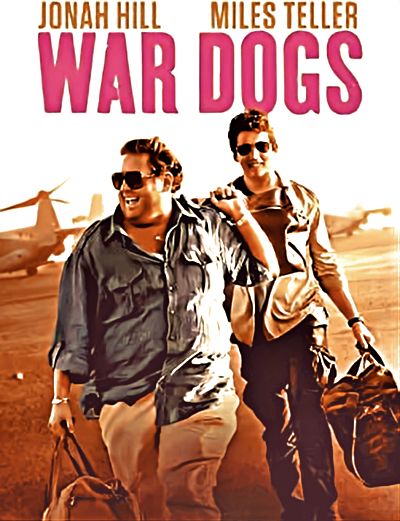 War Dogs is a 2016 movie inspired by a real-life news story, which director Todd Phillips transforms into a black comedy.

The story of two friends who become two international arms dealers, starting out quietly and under the radar.

One of them is married and has a daughter on the way, but his job as a masseur pays only the bare minimum to survive.

So, he is persuaded by an old friend whom he has not seen in years to enter the arms business to make easy money.

Initially, they take in only smaller quantities of guns and ammunition; constantly monitoring a government site and picking out orders rejected by competitors.

However, the market is too full of lucrative possibilities, especially for unscrupulous people who have no problem distorting or forcing the system.

So the friends traffic under the legal cover of a laundry owner who is nominally a financier of their company.

At first, business is mediocre, but the turning point is a dangerous arms sale in Iraq in which the two risk death.

From then on, their company expands with rapid and remarkable success; until they obtain a massive order for millions of bullets for the U.S. military.

To put together the vast delivery, they must partner with a ruthless war criminal; who cannot work directly with the government because he is blocklisted as a terrorist.

So the two fly to Albania, in what could be the deal of their lives or their ultimate downfall; but when things get rough, betrayal is just around the corner, as is the end of their friendship.

It couldn’t be the new Scarface

Todd Phillips was hardly an unknown director when War Dogs was released in 2016, having already been famous for The Hangover trilogy of movies.

Later audiences would literally idolize him for Joker, an interesting dramatic variation on the superhero world of Batman.

Honestly, it never thoroughly convinced me, despite its unquestionable international success; and despite moreover the equally superlative performance of Joaquin Phoenix.

I would have preferred a story freer from the overused ecosystem of Gotham City; but indeed, if it had been a story about a regular crazy clown, it would not have had the same appeal to the general public.

The director constructs an enjoyable semi-criminal parable that makes one smile more than laugh out loud; thinking sadly that there is much of our world in the absurdities.

Having to find fault with it, I can start by saying that undoubtedly the story would have benefited from more general dirtiness and nastiness of the various characters.

To explain what I mean, we can take as a reference the movie that the main characters mention multiple times: Scarface.

De Palma transformed the original character of Al Capone into Cuban refugee Tony Montana but kept the menacing and deadly air of every situation in the story.

Todd Phillips failed in the same feat with War Dogs in 2016, using too soft a style and narrative; but still creating an entertaining and intriguing movie of entertainment.

With his remarkable comic/dramatic performance, Jonah Hill delivers a hilarious character that is cynical and ambiguous.

A guy who is already a made man, lying to everyone and quickly adapting to any situation by becoming his interlocutor’s best friend.

Tenacious and stubborn, the arms dealer accepts no shenanigans from anyone under any circumstances; even overreacting as in his stupid business choices that will bring everyone down.

On the other hand, Miles Teller plays the guy with a family and a clean face; but he is not much less dirty than his big fellow.
Indeed, when he realizes how much easy money he can make; he is more than happy to support his ruthless friend despite knowing full well what they are doing.

Apart from the two main characters, the various secondary characters could have been more interesting; if the director had given them more time and some intimate scenes.

Bradley Cooper is an excellent supertrafficking villain from Eastern Europe, albeit not looking like one at all; the actor compensates for his inevitably American look with his versatile charisma.

Equally interesting could have been the character of Kevin Pollak; the naive partner who puts up money without questions, but he too is seen little except in the ending.

Somewhat more space has the beautiful Ana de Armas, mother and idealistic wife of one of the traffickers; but she, too, has no particularly memorable dialogue or scenes.

Unfortunately, all these characters do not emerge enough; they do not have the time; reducing the whole story to the clash between the two main friends/enemies.

After all, does the movie make it worthwhile?

Despite my reservations about Todd Phillips, I appreciated War Dogs more than the later overly renowned Joker; I better enjoy a screenplay joking about the great theme of gun control.

A topic that sadly continues to be topical today in the United States; where gun-related bloodshed never ends.

Returning to the theme of this article, however, I did not want to sound too mean toward the honest work of Todd Phillips and his fine actors.

The story’s pace flows well without basically any unnecessary or boring dead moments.

Conversely, the staging is perhaps too glossy at times; but the various scenes on the European and African battlefields have a decent impact.

A good choice of soundtrack sympathetically accompanies the various moments in the story; perhaps even too much for moments that are pure MTV-style video clips.

In summary, I did not want to hide the flaws of a movie that I nevertheless recommend as excellent entertainment and I am confident that War Dogs deserved its success in 2016.