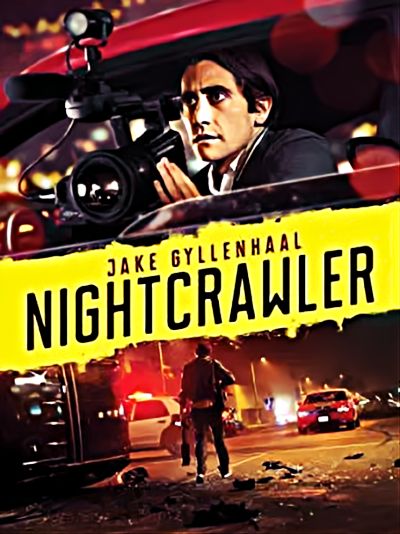 Nightcrawler is a fantastic 2014 movie, an urban thriller about the media world starring an extraordinary and disturbing Jake Gyllenhaal.

The story begins with a lonely, psychopathic boy who makes a living by scraping together a little money through petty theft.

Wandering the streets of Los Angeles all night looking for something to steal, he happens to stumble upon a car accident.

When some people with cameras arrive at the scene, he hears how much money they make from selling their television reports.

So with his little money, he buys a camera and decides to become an independent cameraman; scouring the city for crimes and bloody episodes to capture on film.

The man soon learns the little tricks of the trade and how valuable his work is; hiring an underpaid partner to help him be faster and more efficient.

He also establishes a deep relationship with the woman in charge of news for a major television channel, not just a working one.

However, his career seems to proceed slowly, at least until he films a massacre inside the home of a wealthy family.

Without confessing anything to the police, he knows the faces of the perpetrators and decides to follow them to see if they will commit any more crimes.

He realizes that he is really in danger for the first time, as these killers are just as dangerous as he is.

But being able to complete that story could be the ultimate turning point of success; so he decides to take a chance and convinces his reluctant sidekick to follow him into that madness.

A prime time horror of the soul

Dan Gilroy directs his first movie immediately leaving his mark; after an already excellent screenwriter career on “The Bourne Legacy” or “Freejack,” for example.

Nightcrawler is the crazy story of a ruthless psychopath who finds his place in the world by exploiting the suffering of others and reselling it on TV.

Despite his appearance being almost friendly and naive; the man hides within the darkness that completely lacks empathy for anyone else.

We see his true nature from the first minutes of the story; when he kills without any hesitation or guilt a guard who discovers him during a petty theft.

Aboard his blazing red Dodge Challenger, he runs uncontrollably at full speed through the city; chasing scoops like a predator alienated from reality.

His work feeds the voyeurism for primetime television people; whose appetite the merciless network sharks are pretty happy to satisfy.

The thriller is thrilling and perfectly constructed in its escalation of madness, directly proportional to the protagonist’s wealth and social status.

In this sense, the story is not meant to be moralistic; leaving unpunished and rewarding the violent protagonist for his unscrupulous careerism.

The narrative delves not only into the individual psychology of the protagonist; but also into the mass psychosis of a world desensitized to modesty and suffering.

Just as the protagonist knows how to do, all that matters today is to seem reasonable and rational; even if our daily work and actions prove that we are horrible and heartless people.

Definitely one of the movies that have impressed me from 2014, where it is clear that Nightcrawler is not just the protagonist but the whole media industry.

An actor with a thousand faces

Jake Gyllenhaal offers another excellent proof of his talent already displayed since Donnie Darko, going up to Denis Villeneuve’s recent Prisoners and Enemy.

This actor’s prowess has grown exponentially over the years; culminating in this lucid and terrifying portrayal of an uncontrollable madman searching for success and money.

A monster who has the utterly ordinary appearance of the good guy next door; whose ferocity and determination grow further as he advances in his career as a cameraman.

Equally good is Bill Paxton, another TV cameraman who, unfortunately, will be an obstacle in his path to success.

It’s too bad that his character doesn’t last long and doesn’t reappear later in the story; I would have appreciated further evolution in his relationship with the protagonist.

However, much more important will be the character of Rene Russo; she plays the beautiful and unscrupulous news director of a well-known TV news station.

The more mature and experienced woman will guide him in his climb to fame; ending up also becoming a victim of the blackmail and manipulations of this urban predator.

Finally, Riz Ahmed is the sad and funny sidekick who hopes to find a steady paycheck; realizing that he has become the accomplice of a dangerous criminal liar.

A character who is a mirror of all those who would like to find a job; often accepting questionable conditions to get that little paycheck at the end of the month.

Speaking of money, Nightcrawler was a huge commercial success worldwide in 2014, despite being a low-budget movie.

It is an old noir that becomes modern with an almost video clip rhythm; as well as being the debut of a promising director and the validation of a very classy actor’s versatility.

Warrior – When you fight for...