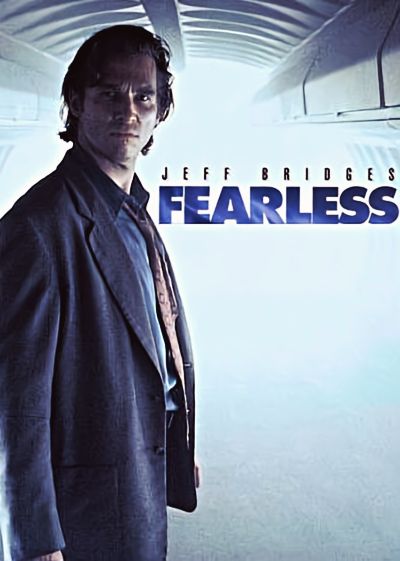 Fearless is a 1993 movie by the great Australian director Peter Weir, starring a superb and magnetic Jeff Bridges.

The actor plays a man who has miraculously survived a plane crash, wandering through a field hand in hand with a child.

After helping many passengers out of the burning carcass, he leaves without telling anyone.

Authorities later track him down, and he returns to his family; where a psychologist is waiting for him to assess his trauma.

From the first moment, it is clear that something in him has profoundly changed and not necessarily for the better.

Despite feigning indifference and even judging the experience positively, the man cannot return to his everyday life.

With his wife and son, the relationship worsens daily because of his increasingly abnormal and detached attitude.

The only woman he can get in touch with is another survivor; who has dramatically lost her little son in the plane crash.

In contrast to him, the woman lives locked in her grief in an almost catatonic state; refusing her husband’s help.

Together they will try to help each other overcome and accept what has happened; but this seems to work only for her.

Indeed, the man is driven by the insane belief that he has become invulnerable; seeking more dangerously borderline experiences to prove something.

His wife desperately tries to bring him back to reality; while a greedy insurance agent would like to exploit his state to get a prosperous settlement.

Of course, his lucid madness cannot last long; sooner or later getting into some kind of trouble from which he cannot get out.

Can the soul’s wounds heal?

Fearless is a moving human drama about the torment of a survivor, strangely enough, one of Peter Weir‘s least-known movies since 1993.

The director directs with a poetic and romantic style, making the experience almost dreamlike; unlike other post-disaster films seen before.

It was not easy to tell a story full of touching humanity; without ever becoming, in the long run, tedious or overly exhausting to watch.

We find the music gentle and cleverly inserted into the various scenes; without ever becoming intrusive, respecting the silence and loneliness of the various characters.

The story’s pace is slow and respectful, finally giving the time needed to enter an almost supernatural atmosphere.

Although the main character claims to be an atheist, he is obviously religiously influenced by his near-death experience.

Therefore, it will be easy to go from not believing in God to feeling that he has become a God.

Although he is unharmed in the body, he is severely wounded in the soul; embarking almost unknowingly on a path leading to healing or death.

His delusion of invulnerability collides with the suffering of everyone he meets; cruelly but unintentionally making them suffer from his cold indifference.

I am sure that many filmmakers would not have been able to avoid slipping into the pathetic; but Peter Weir is skillful and intelligent enough to avoid this trap.

Therefore, do not expect scenes that squeeze you with tears and suffering; be prepared for a philosophical experience with a more suggested narrative than really explained.

Can you live without being afraid to die at all?

Jeff Bridges is a superlative protagonist, able with grace and sympathy to seem both lucid and insane at the same time.

His divine complex of believing himself immortal after the accident; always makes every scene and the evolution of the story unpredictable.

Indeed, every time we hold our breath for who knows what madness he might do or say at any moment; taking refuge in a state of exaltation, unable to express his pain.

On the contrary, he acts with a simple and cruel indifference to all those who try to help him; even sometimes often annoyed because he thinks he doesn’t need help.

Instead, he behaves quite differently with his soul mate; surviving mother girl Rosie Perez.

He becomes her savior angel, tirelessly trying to make her forget the dramatic pain of losing her son.

Indeed, a group of profiteering lawyers around the plane survivors would like to profit from their suffering.

Many victims’ families succumb to the deception, but the protagonist adamantly refuses to lie, ruining the deal for everyone.

Thus the conflict between the salvation of the soul and the vile money ends up alienating him permanently from all friends and relatives.

The only hope he has left is his wife, the beautiful and solemn Isabella Rossellini; who responds blow after blow to every folly of her unstable husband.

Small mention also the excellent psychologist by John Turturro; unfortunately, he seems to almost disappear toward the end of the story.

Fearless is a 1993 movie that has lost none of its elegance and narrative power. You will find yourself wandering like the protagonist in a strange territory with invisible boundaries; where sometimes the mentally ill seem to be the so-called ordinary people.