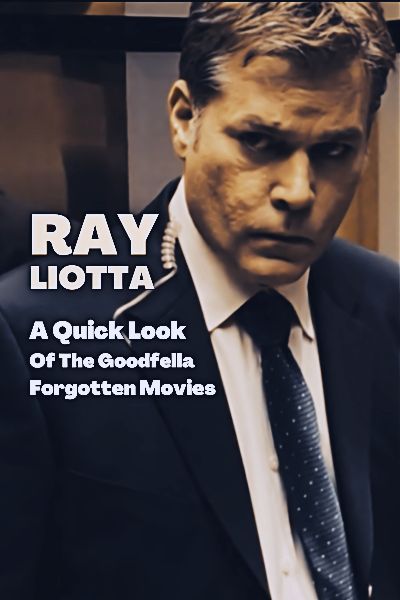 This week we sadly said goodbye to one of the greatest American movie stars of the last 50 years, Ray Liotta.

An actor I remember from the distant days of Something Wild in the 1980s, where his criminal face fit perfectly into the framework of a romantic comedy.

The cinema evolved as the years went by, as did his extraordinary performances, culminating in Martin Scorsese‘s groundbreaking Goodfellas.

That petty criminal who becomes one of the most dangerous gangsters in his neighborhood was an essential turning point in constructing mob movies.

No doubt that was the high point of his worldwide fame, but it was certainly not the end of his glorious career as an actor and beyond.

For example, as a lover of video games, how can I forget his voice in voicing the protagonist of the violent and entertaining GTA Vice City?

His hilarious Italian-American criminal Tommy Vercetti would become one of the best characters in Rockstar’s video game saga.

I am sure that many others on the Internet will rightly write many articles about this magnificent actor in the days to come.

So I will try to be very specific by telling you about three movies starring Ray Liotta that are among my favorites but about which little or nothing is talked about nowadays.

Let’s start digging into Ray Liotta‘s archive with a good action/sci-fi film, always one of my favorite genre mixes.

The actor plays a brave soldier who gets into trouble after a bloody mission with many civilian casualties.

Unable to accept the needless slaughter, he kills his commander, guilty of deceiving him with false information.

As punishment, they sentence him to life imprisonment in a maximum-security prison, from which they quickly send him to a distant island/prison without guards.

In that remote place live the most dangerous inmates, left to their own devices without supervision to live like primitive men.

Initially, he looks like he is about to meet a wrong end immediately, captured by a tribe of ruthless cannibals who would like to eat him for breakfast.

But the brutes underestimate his military training, and the man manages to free himself and escape, taking refuge in the island’s interior.

Here lives instead of a more peaceful community of prisoners, who have organized a small town well protected from cannibal assaults.

However, even that place is not the paradise it seems to be, with some traitors inside who rat on the prison warden.

As they must defend themselves against increasingly brutal attacks by enemies on the coast, the islanders give the soldier a special mission.

With his help, they can finally find what they need to carry out an escape plan they have been preparing for so long.

The great action/spy movie relaunched the 007 brand with the new face of Daniel Craig; whom I prefer with all due respect to the late giant Sean Connery.

No Escape is one of his lesser-known works, incomprehensibly branded by the same director as a mediocre and insignificant little film.

However, as far as I am concerned, it is a delightful variation on the theme of the hero locked in a prison world; which John Carpenter had already used with the absolute cult Escape from New York.

First of all, Ray Liotta is an outstanding protagonist, proving that he can handle action roles as well.

Surrounding him is then a great cast, such as Lance Henriksen as the spiritual father of the islanders; or the perpetually evil Stuart Wilson, who is instead the cannibals’ leader.

Also very good is the very young Kevin Dillon, an actor who would surely improve a better career; here as the main character’s pain-in-the-ass right-hand man.

Beginning as a dystopian sci-fi with the usual multinational bastard to indiscriminately control and terminate people’s lives; it then becomes a mixture of man-fighting in prehistoric/medieval sauce.

Instead of innocent kids left to their own devices like Lord of the Flies, we have vicious convicts already accustomed to violence and murder.

The result is an action film with perhaps rhetorical characters but never stupid or trite; just as we could say for the screenplay and directorial choices.

I was still far from interested in Scorsese’s cinema; it was the first movie I saw the great Ray Liotta in, so it will always have something special.

From being a hero on a godforsaken island, we now turn to a movie where Ray Liotta is instead a psychopathic serial killer.

The actor plays a convicted killer who, along with another prisoner, travels under some feds on an airliner.

But the flight soon turns for the worse, with the criminals slaughtering the escort agents and then trying to kill each other.

Many other passengers are seriously injured or killed in the chaos that follows, as are the plane’s staff and pilots.

The only one who survives is a young stewardess, somewhat shy and awkward, who manages to isolate herself in the cabin away from the serial killer.

Meanwhile, the situation is just as dramatic on the ground, with a devastating tornado threateningly approaching the Los Angeles airport.

In an attempt to manage the crisis, authorities call in the detective who had hunted down and arrested the dangerous killer.

A deep hatred has always existed between them, and to frame him, the policeman had placed false evidence at the scene of one of the murders.

Consumed by resentment toward a system he believes unfair, the serial killer wants to crash the plane over the city; killing as many people as possible.

At that point, the only one who has any chance of stopping him is the poor stewardess; who finds herself ultimately alone 5,000 meters above the ground along with a homicidal maniac.

Saved on the fly from a serial killer?

Let’s face it: despite being a $50 million-plus production, this movie would be worth extremely poorly without Ray Liotta.

Indeed, the actor’s exaggerated performance turns the whole story into a resounding one-person show; where the pissed-off protagonist fills the numerous holes in the script with his charisma.

Thus the story is a continuous challenge to the laws of cinematic probability; albeit in an action movie context where the audience certainly does not expect absolute realism.

The direction also offers no particular points of interest; at the hands of Robert Butler, who not surprisingly has a very long career, but mostly in television.

However, Ray Liotta‘s big face covers every possible flaw you can find in this movie; which I do not even attempt to deny.

Initially seeming a quiet, introverted character; once in the air, he unleashes all his madness in a series of irresistibly nonsensical dialogues.

The target of all his ire is poor Hector Elizondo; a somewhat dim-witted and bumbling policeman who nevertheless frames the serial killer by deception.

I defy anyone not to laugh as he tries to reason with the killer over the radio; while the latter responds furiously that he wants to fly the plane up his ass.

Amid this delusional tale of high-flying revenge; innocent blonde Lauren Holly gets stuck on the flight with the delusional protagonist.

Like the director, the actress has a purely TV career; but her character offers an exciting sidebar of innocence to the overall villainy of the story.

In short, in summing up, Ray Liotta saves from disaster what wished to be a 90s revival of the old Airport-like disaster movies; turning a lump of coal into a little B-Movie diamond to fish out of oblivion.

After two films that I loved for my enjoyment; let’s finally talk about what is undoubtedly Ray Liotta‘s best role since the distant days of Goodfellas.

The actor plays a Detroit police lieutenant who is called in to investigate the murder of a fellow officer who had infiltrated local drug dealers.

To help him in the investigation, he is joined by a colleague, who also once worked undercover; then put on forced rest after killing a woman during a shootout.

As they beat the city street searching for answers, at the same time, they deal with their life problems.

The lieutenant is a man embittered by loneliness after the death of his wife; while the former infiltrator has left his job with nasty drug addiction.

Investigating the life of their colleague, the two weary, life-hardened men uncover a festering boil of corruption and exploitation; which the department would gladly do without.

The old lieutenant is not going to give up, since the victim was not only a colleague but also his best friend.

So he decides to make his way to the truth at any cost, even by repeatedly breaking the laws he is supposed to be enforcing.

His colleague, however, is hesitant whether to follow him down that filthy snake pit; fearing for his already hovering career and his family falling apart.

However, the investigation soon goes beyond the point of no return, discovering that even the victim was not the hero his colleagues would like to remember.

Predators of the urban jungle

I have read many critics and online reviews that bring Narc closer to the legendary Touch Of Evil; one of the greatest detective noirs in film history.

Indeed, many style choices recall the masterpiece by and starring Orson Welles, but I also saw something else in it.

While watching it not so long ago honestly; I savored the old atmospheres of police corruption in films like Sidney Lumet‘s Serpico again.

Scandalously Narc found very little distribution in theaters in 2002; in some countries not even shown at all.

Still, this film’s cold and dirty soul remains inextricably linked to its style; as we later admired in 2011’s magnificent The Grey.

Jason Patric undoubtedly reaches the peak of his career; after his exciting role in Sleepers and the extremely forgettable Speed 2.

But once again, I have to repeat myself; stating that Ray Liotta is the beacon around which all the rest of the cast revolves.

In this case, however, at his service, we also have perfect direction and screenplay; which enhance to the nth degree the priceless talent of a great movie animal.

An animal that moves unceremoniously through an asphalt jungle; among apartment buildings crowded with junkies and thugs; without being any better or worse than the human trash he investigates.

Narc is an unforgettable masterpiece of noir ferocity and the spiritual testament of a face in cinema; someone we will struggle to forget or replace in the years to come.