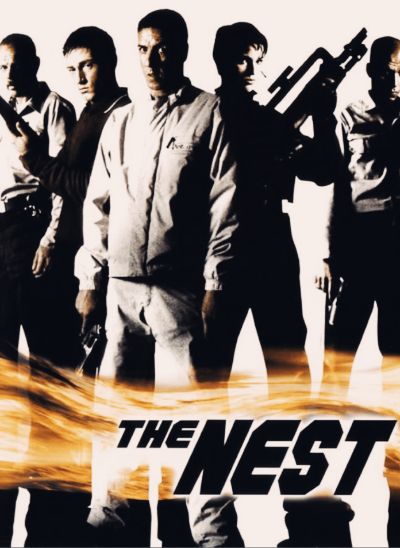 The Nest is a fantastic 2002 French action movie where the tradition of under siege John Carpenter style of Assault on Precinct 13 is renewed.

It begins with a mixed team of French and Italian policemen; who must escort a dangerous criminal to his war crimes trial.

In addition to being guilty of countless rapes; the man is guilty of terrible trafficking in women his gang kidnaps and sells throughout Europe.

As they are traveling a secret route to Strasbourg, the boss’s men attack the convoy, killing almost all the officers.

However, the armored car carrying the criminal manages to escape the ambush and takes cover in a nearby department store.

Unfortunately, that same night a group of thieves had infiltrated the warehouse to steal a large shipment of expensive laptops.

Immediately a conflict arises between the thieves and the policemen. Still, the groups put their hostilities aside when soldiers surround the place, shooting them all.

While not communicating in any way; it is clear that they demand the release of their leader or else they will kill everyone in the warehouse.

Having no intention of letting the sadistic rapist go free, the survivors unite to defend themselves from the assaults while waiting for help from outside.

Two ordinary night watchmen, who are familiar with every corner of the place and can help them resist, join them.

However, the place is geographically isolated. The thieves had cut off all communication, so soldiers can attack repeatedly without interruption.

For everyone imprisoned in that situation, it will be a long night of violence, growing weaker and wounded, while their enemies seem instead to be endless and unstoppable.

In The Nest from 2002, cops and thieves must work together against an army of mercenaries.

Continuous action is gripping, but it is not just about petty violence aiming only to be merely spectacular.

The story is clever and well-paced, with many unexpected twists and turns in the many ways the soldiers attempt to force their way into the warehouse.

Most scenes take place in little light or complete darkness, giving the film a mysterious and fascinating feel.

In this way, the enemies assaulting the protagonists seem never-ending and are almost heedless of their lives by attacking in a nearly suicidal manner.

The characters are believable and not necessarily heroic or likable, such as the small group of violent and vulgar thieves.

Although they initially seem stupid and selfish; they will be in a situation where they will finally have to prove their courage.

The psychological evolution of the characters does not occur through profound dialogues but directly in their choices on the battlefield.

For example, someone initially seeming to want to dump his wounded friend will later risk his life for the good of all.

Similarly, the cop in the iron mask who looks like a callous tough guy will make the same sacrifice in a brief but intense escape scene in a van.

All these styles and narrative choices make a huge difference; compared to movies that perhaps have richer productions and more famous actors.

While the claustrophobic setting undoubtedly stems from the small budget, the director exploits it to keep focused on a cast of actors and actresses who really believe in it.

The result is an action movie of the sort we see less and less of today; while The Nest, despite being from 2002, has not lost an ounce of its classic action power.

When I saw The Nest in theaters in 2002, I believed I was witnessing the birth of a great new action movie maker.

Unfortunately, Florent-Emilio Siri was noticed and absorbed by Hollywood for the forgettable Hostage with Bruce Willis.

Not that he disappeared, indeed directing two decent movies like Intimate Enemies and the biographical musical My Way.

But the director has never again been able to repeat the magical chemistry and perfect pacing of this French action gem.

The alchemy also existed among the cast members; they were very diverse in characters of different personalities and social backgrounds.

Each of them is well described psychologically in the motivations that drive them to do what we see on screen.

Among the police officers, the one who impressed me most was the beautiful Nadia Farès.

The woman becomes the commander of the men by exclusion as the ranking officers are brutally killed in the initial assault.

On the other hand, among the criminal group, we recognize the friendly face of Samy Naceri, longtime star of the Taxxi series.

Firmly attached to his brother, whom he seems to want to take care of at all costs; his role will change drastically very quickly.

Finally, we mention the late Angelo Infanti as the elegant boss dressed in white whom the soldiers want to free.

One of the last tests for an excellent Italian actor, perhaps little known; but who worked with directors such as Claude Chabrol and Francis Ford Coppola.

Summing up, The Nest is a 2002 must-watch for all action movie lovers; fun and exciting to watch and admire again and again.

A lesson, moreover, that low-budget productions proudly give to Hollywood’s big blockbuster projects.