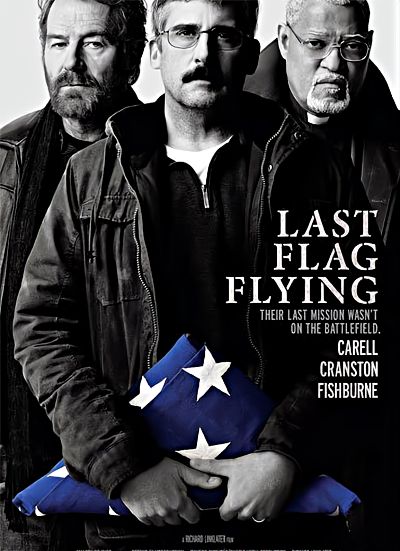 Last Flag Flying is a beautiful 2017 Amazon production directed by such an experienced movie maker as Richard Linklater.

This story is about three friends who reunite years after the Vietnam War, where they got into trouble, and one of them went to prison.

The younger one looks for the other two, starting with a fierce but friendly slacker who now runs a bar.

His friend struggles to recognize him but then agrees to go with him to see the third member of the group, who has now become a Christian pastor.

When they later arrive at his church and meet his wife, he finally explains the reason for his visit.

A few days earlier, the army had informed him of the sudden death of his son, killed in action in Baghdad.

Having no relatives or other friends, the man asks them to accompany him to retrieve his son’s coffin and arrange for his military funeral.

However, when he finds out that the army lied to him about the circumstances of the death, he changes his mind and decides to take care of the burial himself.

He intends to finally reunite the family by taking his son to the same cemetery where he buried his wife.

Accompanied by another young soldier, a victim’s best friend, they also travel through memory, thinking back to their youth during the war.

Richard Linklater directs the film in his proven and compelling style, exploring friends’ relationship with each other and their families.

The photography and editing are gentle naturalness, focusing on narrative fluidity rather than visual spectacularity.

In the face of tragedy, comradeship is emotionally powerful meeting personal consequences of war quickly forgotten by the Americans.

Skillfully alternating comedy and drama, the director mixes them in perfect balance without one prevailing over the other.

As he had already done in other films, for example, The Before Trilogy; it seems to see a set of snapshots between old friends that, edited together, form a story.

The result is a novel on the road, delicate and fun. It is almost natural to empathize with three men with such mutual attitudes immediately.

These former soldiers ironically reflect on their defeats and small personal tragedies and those of their nation.

The soundtrack of Last Flag Flying has so many artists; most of them American classics such as Bob Dylan and Albert King.

It’s a hilarious scene where Bryan Cranston mocks black singers listening to a rap song; not realizing that the white Eminem is singing it.

Distributed by Amazon Studios and Lionsgate, the film was shot primarily on location between Pittsburgh, Pennsylvania, and New York City.

Steve Carell performs quite differently from the usual explosive and funny character we know from his many comedies.

His dramatic but moderate interpretation is much closer to Welcome to Marwen, where he perhaps is even better under the direction of the great Robert Zemeckis.

However, he is a shy and reserved man with a modest demeanor, yet witty and intelligent when he finally relaxes with his friends.

Although he repeatedly suffers from bad luck, he has always managed to recover and lead a happy and peaceful life with his family.

But when his son dies after he also loses his wife, he needs his old friend Bryan Cranston.

The actor plays his role with hilarious aggression as a bartender and alcoholic who lives his life without high expectations.

Together, they will go looking for Laurence Fishburne, a friend who has always been violent in the past.

Ironically, the latter has become a quiet priest and pastor in his small community.

The addition of this character creates an explosive mixture and an irresistible sequence of jokes and arguments.

The many dialogues are about religion, God, the army, and even Saddam Hussein, announced on TV as having just been killed in those days.

I can understand not having seen Last Flag Flying in 2017 since it is a poorly talked and publicized film.

But today, if you love human-sized dramas and comedies, you absolutely must catch it up.

I have already seen it several times, letting the quiet feeling of a wonderful evening among old friends envelop me.