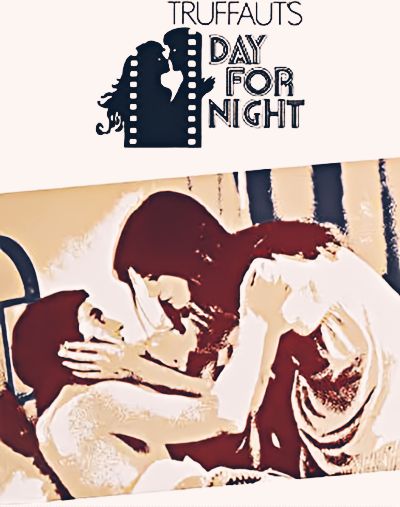 Day for Night is a 1973 French New Wave highlight directed by François Truffaut that chronicles the making of a movie.

Hypothetically it should all be easy, with a good director leading a capable crew he has worked with before.

Moreover, the production manages to get a famous and gorgeous actress to star, ensuring box office receipts.

However, from day one, minor problems emerge between personal relationships and the director, who tries hard to keep the peace by not arguing with anyone.

One older diva drinks too much, cannot remember her lines, and is envious of her younger and more beautiful female colleague.

Another actor is on his last chance after suffering a nervous breakdown on an expensive American blockbuster set.

Friendships and quarrels arise between these characters, leading to betrayals by one actor’s girlfriend, who runs off with a stuntman.

Finally, the production continues to cut the budget and limit shooting time; everything costs too much and needs in a hurry for completion.

Then, to complete the drama, the co-star really falls in love with the actress as in the movie plot.

Obviously, she has no desire to deal with it but plays along not to spoil the atmosphere and performance.

Except when he takes her flirting too seriously, she may risk ruining her marriage.

Battling these little follies every day, will the director eventually succeed in completing his work?

A peak of the French New Wave

Day by Night is one of the most famous films of the French New Wave from 1973; it even won the Oscar for the best foreign film the following year.

The title refers to the same filming technique; consisting of filming in the daytime yet using filters and other methods to make the footage look nocturnal.

This trick allows for a more realistic depiction of night scenes and limits the camera film’s sensitivity problems.

For example, they used blue filters on the lights and slow-motion to make the scene appear darker.

Otherwise, you could use a bright light, or colors could be desaturated in post-production, creating a dreamlike or surreal effect.

These techniques originated with poor means, saving time and money for low-budget productions.

In addition, the deliberately chaotic nature of the filming is impressive: one has the feeling of really being on set with these strange characters.

The director creates a sense of realism with surprise cuts and quick edits alternating with long sequences to make a confusing sense of real life.

It is no accident that Francois Truffaut was one of the critical artists of the French New Wave, a group of filmmakers that emerged in the late 1950s and 1960s.

They often used the hand-held camera and nonlinear storytelling techniques, a style of which Truffaut’s films are proud exponents.

Like 1973’s Day by Night, these movies were characterized by small budgets, resorting to natural lighting and exterior shots.

The cast playing the cast

Truffaut himself plays the tamer of this metacinematic circus engaged in the creation of a film called Je Vous Présente Paméla.

However, he almost fades into the background, compared to the comic dramas of the rest of the cast.

Given his experience, he is wearily familiar with these daily messes; as he says to one of his actors: cinema is better than life.

Among all the strange cast personalities, Jacqueline Bisset is the only one he really relies on.

Once famous, the woman is trying to make a comeback after several years out of the spotlight.

Fresh out of a nervous breakdown, she seems unprepared for the constant cascade of craziness she experiences every day on the set.

Even better was Valentina Cortese, praised by critics and nominated for an Oscar the following year for her character of a woman in her 50s in her twilight years.

Ingrid Bergman later won the award. She, however, praised the performance of the superb Italian actress right on the red carpet.

Comical and romantic is her love affair with Jean-Pierre Aumont, also playing an aging actor doing this work more out of inertia than true passion.

The consequences of this relationship inevitably cause problems on the set and almost bring the actor’s marriage to ruin.

A simultaneously severe and comic reflection on the human experience, it perfectly exemplifies a movie with a carefree spirit like 1973’s Day for Night.

This is not to say that it lacks meaning or depth; it simply makes the point about the world of movies not always being as fascinating as it seems.

Above all, however, Truffaut also suggests that making a film is arduous work.