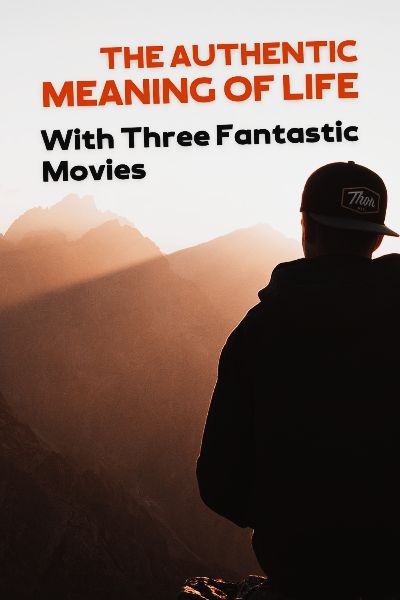 Discovering the meaning of life is a question that has been asked throughout movie history, but its answer remains a mystery.

Some believe that life is simply a series of random events, while others think there is a greater purpose.

Regardless of what one believes, everyone experiences life differently.

For some, life is full of happiness and joy. In contrast, it is challenging for others, but whatever your experience, it is what makes you who you are.

Sooner or later, we all look for meaning giving something more to our lives in religion, work, or hobbies.

Still others shelter in a family or the lack of it for freedom perhaps lonelier but also more personal.

But for some, the pursuit of meaning comes easily from the art life world, just they look to movies for guidance, to find answers to big questions, not just for simple entertainment.

While we know life is not simple as a three-act structure, sometimes movies come near to giving some answers.

Eternal Sunshine of the Spotless Mind  (2004)

The story begins with a boy and a girl meeting by chance on a beach, liking each other immediately.

After start dating, however, they feel there is something strange between them, as already knew each other before they met.

Indeed, they were already together several times before, but the relationship had ended because of constant and stupid quarrels.

Wishing to forget that painful breakup; they both turned to an agency that, with new technology, can remove unwanted memories.

But one of the employees had fallen in love with the girl; using information obtained in the process to convince her to stay with him.

On the other hand, the boy had aborted the procedure before completion, remaining in the dreams of his disintegrating memory.

At that point, the head of the society decided on a drastic intervention; personally going to his patient’s home to finish removing the last memories of his lost love.

But the boy is far more tenacious than he imagined, clinging desperately to the shreds of his ex-girlfriend’s memory.

At the same time, a company employee becomes suspicious of having been brainwashed in the same way.

She then goes to her boss for a painful personal confrontation since she has been in love with him.

Facing him while the time passes and the last bits of memories vanish; they realize that maybe it is not the best way to deal with their grief.

Is it better to live a lie or suffer the truth?

Eternal Sunshine of the Spotless Mind was a box office success, grossing more than $70 million worldwide.

The journey between drama and science fiction fascinatingly explores a man’s mind desperately trying to hold on to love.

Michel Gondry directs a work that (ironically) is really hard to forget; nominated for several Oscars, including the best original screenplay written by Charlie Kaufman.

Montage techniques are innovative due to flashbacks and a nonlinear narrative; with numerous jumps and quick cuts that continually intrigue the viewer.

Jim Carrey gives a terrific portrait of a man both funny and heartbreaking and adds great depth to the role.

Equally memorable is Kate Winslet; who, while forgetting her former life, ends up falling in love with her ex-boyfriend as if in a dead-end loop.

Wondering the meaning of life if we forget all the people we have loved, the movie does not give a definitive answer.

Does time really heal all wounds? It is difficult to give an unambiguous answer.

Although the pain will never completely disappear, perhaps, however, day after day, we can look back without feeling the same intense pain.

Gondry mixes mainly the romantic genre with comedy and thought-provoking science fiction elements with a touch of the surreal.

Starting with the idea that in someone else’s hands might have been laughable, he instead develops it with intelligence, courage, and originality.

In summary, not only must Eternal Sunshine of the Spotless Mind be seen, but it also deserves more than one viewing to truly be fully appreciated.

From the two forgetful lovers, we move on to a Ukrainian-American smuggler and his rise to power in the international arms market.

The man begins as a humble restaurant manager with his brother, who is dissatisfied with their lives.

They then decide to start a small illegal trade by traveling to the world’s worst war zones.

The market, however, is already full of greedy and unscrupulous traffickers; so getting into the business seems impossible for a couple of small-time punks like them.

Everything changed with the fall of the old Soviet regime; which left the military with an immense arsenal without the central government controlling it anymore.

Without wasting any time, they exploit the friendship of their old uncle. He’s a high-ranking Russian officer, which allows them to make a lot of money very quickly.

Thus they became famous in the underground environment; quickly selling weapons to some of the most notorious dictators and criminals of the late 20th and early 21st centuries.

Becoming increasingly wealthy and powerful, the older brother courts and wins a beautiful model whom he ends up marrying.

It’s quite the opposite of his younger brother, who becomes increasingly addicted to drugs and dangerously insane for their work.

However, even the beautiful wife is not stupid and realizes where all that money came from, feeling tremendously guilty.

While an unstoppable Interpol agent is desperate to frame him, the dictatorial regimes of their dangerous clients also fall apart in riots.

At that point, it is only a matter of time before reaching the climax changes all their lives, without anything really changing in the world.

The true price of money and fame

Andrew Niccol‘s Lord of War is a 2005 action-drama film that deals with the arms trade’s sensitive political, legal, and moral issues.

Many reviews criticized the plot and violence while praising the excellent direction and performances of the various actors.

Despite negative reviews, the movie was a blockbuster winner at the box office, grossing $66 million worldwide.

Nicolas Cage‘s portrayal of arms dealer Yuri Orlov is one of the most accurate of his career.

The actor perfectly captures the character’s ruthlessness, charm, and intelligence, leading the audience to sympathize with Orlov even though he is doing terrible things.

By contrast, Jared Leto borrows from his real-life by fictionalizing his brother Shannon‘s terrible experience.

In 2005, desperate for money, he turned to Jared for help and ultimately got a job as an extra on the set of Lord of War.

Bridget Moynahan is the character who unites the protagonist’s two lives, even though it may seem like just a device to insert a love story into the plot.

But unlike her husband, her conscience will lead her to betray before her family is irreparably torn apart by violence.

Finally, we have the always good Ethan Hawke, this time in the role of the naive and hopeful (but still tough) justice boy.

Indeed, although he eventually succeeds in framing the criminal, he fails to convict him, and the criminal goes back to dealing with guns as if nothing had happened.

Beyond the complex international situation of arms trafficking, the director also questions what we are willing to lose for success.

Looking at the character’s life in this movie, it has meaning to be rich and powerful if there is no one waiting for us when we go home at night?

As of today’s last film, we recommend a story inspired by a young American’s magical and tragic experience, Christopher McCandless.

After graduating in history and anthropology, the young man was intensely conflicted about what direction and meaning to give to his life.

While his parents wanted him to settle down with work and family in mind, he dropped everything for a long pilgrimage across America.

He decided to go on foot for his journey, with no money and no means to keep in touch with those who knew him.

His experience will take him through many more or less dangerous situations and get to know many communities of peaceful people.

During this long walk, he encounters policemen who mistreat and mock him as a simple homeless person several times.

But fortunately for him, there will be others who are instead willing to take him in and help him, preparing him for the final destination of his journey.

Indeed, he wants to get all the way to Alaska and there to live only on fishing and hunting.

However, once he arrives in that desolate and lost corner of the world, he is stranded with no way to turn back.

He then begins to think that he has made a mistake, underestimating the difficulty of the undertaking in which he wanted to engage.

As if it were a testament, he writes in his journal what he thinks are his last words to the family and friends he left behind.

The wild and unknown human soul

At the helm of Into the Wild is Sean Penn; adapting the book of the same name for the screen about Christopher McCandless’ experiences.

After lengthy negotiations with the family over the meaning he want to give, he managed to come out on top by making one of the best movies of his life.

The cinematography in Into the Wild is simply breathtaking. Each frame is a miniature work of art, perfectly capturing this strange journey.

It maintains a good pace, engaging the viewer without making him feel rushed; on the contrary, it is prosperous and vibrant.

The screenplay based on Jon Krakauer‘s book is poetic and enhances the natural beauty and McCandless’s loneliness and isolation.

Emile Hirsch gives an outstanding performance as the young protagonist and conveys his idealism and despair.

He is a boy tired of the materialistic world in which he grew up, wishing to find his own way.

It is hard not to have ambivalent feelings toward this strange character; who is partly brave and strong but also foolish and reckless.

However, while I do not always agree with his ideas; I greatly admire his determination to follow his own path despite everyone’s opinion.

Among the many people he meets, note a young and beautiful Kristen Stewart, a lurching singer who understands and accepts the boy for who he is.

Equally good is Hal Holbrook, the last man he meets before getting lost in the Alaskan woods, perhaps later regretting his end.

Into the Wild was a critical and box-office success in 2007, grossing more than $50 million worldwide.

Personally, I give well-deserved applause to this movie that teaches us that the meaning of life; perhaps, is to accept what it offers, both the good and the bad.