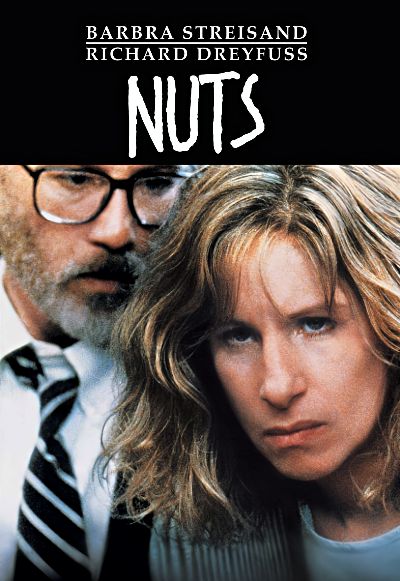 Nuts is perhaps one of the most underrated movies of 1987, a psychological, legal drama starring a superlative Barbra Streisand.

The superstar American singer/actress plays a prostitute who ends up in jail after killing one of her clients.

Helping her is the young, maverick Richard Dreyfuss, who replaces her lawyer after she beats him savagely in front of the judge.

Given her highly aggressive behavior, they hospitalize the woman in an asylum where psychologists say she cannot stand trial.

But her new lawyer thinks otherwise and requests a hearing to determine his client’s actual psychological capacity.

For three days, he must fight against her wealthy parents, who want to put her in a mental institution.

Establishing a relationship with her will not be easy, given her extreme distrust of anyone, especially men.

Slowly the lawyer wins her trust, listening and allowing her to express her point of view finally.

At that point, he discovers that she had become a pricey prostitute for many wealthy people in the city after abandoning her family.

Indeed, the murder is a glaring self-defense case from a client, .assaulting her after a sexual affair.

However, it will not be easy to expose the case in court, given the woman’s unruly and irritating behavior.

When it comes to confronting her parents, they will find that such aggression hides terrible childhood traumas.

Then the man will do everything he can to bring out the truth, even though his client does not want to hear it.

Madness and freedom on the stand

Martin Ritt was a much-loved filmmaker in America for more than three decades; best remembered for The Spy Who Came in from the Cold.

1987’s Nuts represents the penultimate movie of his long career, strongly desired by Barbra Streisand, who also produced it.

However, Ritt distinguishes by skillful camera use, which bounces from character to character in the many dialogues on the stand.

Although there is virtually no action, the plot unfolds at a good pace that gives no room for boredom by always making something interesting happen.

The trial is just the trigger to vivisect a woman’s life who rejects the standard conventions of society.

At that point, the legal struggle becomes a larger issue: what exactly does it mean to be crazy and normal?

Can having irreverent and irritating behavior against anyone be considered insanity?

Or perhaps the fault lies solely with us if we often regard as outsiders to be pitied those who do not live according to our moral canons and standards.

Indeed, the woman could easily avoid jail time by accepting admission to an asylum; but she is not up for being framed as insane.

It is not easy to hold the helm of such a story, but the director succeeds perfectly, creating excellent chemistry among the great actors in the cast.

The narrative structure never has any sag, and this woman’s struggle for her freedom is passionate from a legal and human point of view.

Younger people may not have had a chance to see it in 1987, but Nuts is one of the most exciting and straightforward legal movies I have ever seen.

Barbra Streisand dominates the scene, succeeding in the not-so-easy task of irritating and enthralling us with her complicated story.

The actress casts herself to perfection in the role of a high-class prostitute; as elegant and sexy as she is a furious and unstoppable talker.

This proud woman would rather have sex with strangers than seek help from a family she hates.

Richard Dreyfuss sometimes struggles to get into the wild protagonist’s dialogue, but he keeps his character interesting.

The lawyer takes the case almost as provocation and spite toward the judge but soon realizes that there is more underneath that his client won’t say.

In this sense, the lengthy testimony of the father, played by Karl Malden is literally impressive.

Unfortunately for the great American actor, 1987’s Nuts will be the last movie of his long career.

Equally good is Eli Wallach, the famous Tuco Ramirez of Sergio Leone’s magnificent The Good, the Bad and the Ugly.

Here the actor plays a dull-witted psychologist who is absolutely determined to lock up the protagonist at any cost.

Finally, we point out the splendid Maureen Stapleton as the mother, who is as ambiguous and strange as her daughter.

A character who is detestable at first, but for whom we will also end up feeling deep compassion.

To sum up, Martin Ritt starts with a subject that is perhaps not even too original yet carves out a unique little cinematic gem.

For Barbra Streisand lovers it is an absolute must-see, but for everyone else, if you don’t see it, it would be you to call Nuts.