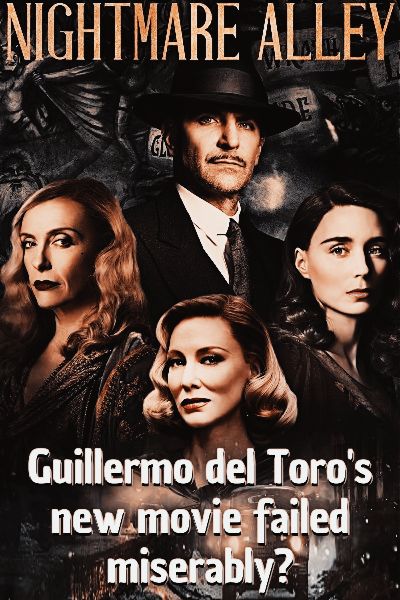 After winning his second Academy Award with The Shape of Water, Guillermo del Toro arrives in 2021 with a remake of an old movie from 1947, Nightmare Alley.

On paper, the project had everything it needed to win and convince audiences one more time.

It was a big, star-rich Hollywood production by a solid, confirmed director who had a classy script in hand.

However, along its path in various theaters worldwide, something seems to have gone wrong.

Indeed, against $60 million budget the movie grossed less than $40 million, resulting in a flop at the box office.

Let us clarify right away that I consider Nightmare Alley a movie consistent with the director’s filmography, which has never disappointed me from the distant 1993 Cronos to 2021.

Let’s talk about it a bit together, trying to take a closer look at the latest effort of the prominent and great Mexican filmmaker.

Leaving the actual beginning of the movie that will later tie into the ending; the story opens with a handsome young man leaving his country home.

Onboard a train, he meets some people who work in a circus and offers him a handyman job.

After a while, the boy befriends the many bizarre performers there and decides to stay.

Above all, he becomes close to a fortune teller and her drunken husband, who once performed by reading people’s minds.

The older man teaches him the rituals of mentalism and tricks for guessing hidden objects from spectators.

At the same time, he falls in love with a young circus performer who entertains the audience by manipulating electricity.

Having had enough of the poor and isolated place, the two abandon everyone, seeking a new life in the city.

After a few years, they form a very famous couple doing shows for wealthy and influential men.

Some take their tricks seriously, beginning to believe honestly in the boy’s mental power.

Against her advice, he takes advantage of this suggestion by claiming that he can make contact with the dead.

A famous psychologist enters into these scams who begins to be his accomplice, passing him valuable information about clients.

Eventually, she introduces the mentalist to a rugged dangerous businessman who wishes to speak with his deceased mistress.

The ultimate con will be a no-holds-barred game of deception and lies, where any misstep can lead everyone to death.

Bradley Cooper is an actor who has been patient; working through the ranks on television series like Alias and comedies like Yes Man and New York, I Love You.

After that, he achieved notoriety with the worldwide success of The Hangover; which then led him to work as the lead in Clint Eastwood‘s American Sniper.

His escalation peaks in 2021 with Nightmare Alley; where we can say he reaches his ultimate maturity with the most complex and controversial role of his career.

A strong and charming character who never tries to please us and toward whom we do not feel empathy for even a minute.

Equally intriguing is the counterpart played by Cate Blanchett, as elegant as she is a psychopathic doctor of the mind.

At first, she seems only a minor character, yet soon becomes equally essential, if not more so, than the protagonist.

The Australian actress is the queen of the screen when she appears on the screen; inevitably catalyzing attention to her icy, magnificent eyes.

The opposite is the naive showgirl Rooney Mara, unaware of the darkness that hides within her, the man she loves.

Naive does not mean weak fool, as the ruthless manipulator will discover in the whole event’s cruel ending as well.

Among the thousand faces of the circus, impossible then, not to mention Willem Dafoe; a movie face and a top-class actor in any role he has ever played.

He perfectly epitomizes the human race’s predatory nature, treating his artists like zoo animals to be bred and tamed.

Finally, there is the small (even too small) cameo by the likable Ron Perlman; the amazing Hellboy of the two movies directed by Guillermo del Toro.

The actor continues to follow the director since 2003 Cronos, coming to the smuggler Hannibal Chau in 2013 Pacific Rim.

I hope sooner or later to see him again as the absolute star in one of his films; perhaps with the long-awaited Hellboy 3 that Hollywood doesn’t seem to want to give us.

It is magnificent to admire how, while changing movie genres, his directing style remains the same as we know it.

The story does not take any supernatural turns, staying in the realm of human folly’s simple (shall we say) chasm.

Yet the mood remains that of his more successful fantasy novels, such as Pan’s Labyrinth and The Shape of Water, enhancing the fantastic worlds of his inimitable freaks.

It can almost feel like watching two different movies separated by a two-year time gap, given its long duration.

The first part of inside the circus is a long introduction of the protagonist, a man without a purpose who finally finds something to excel at.

Speaking of the art of mentalism, could we draw a parallel with the entire film industry?

What are movies if not an extremely elaborate, romantic, and spectacular way of telling a lie?

Instead, we witness a massacre game paying homage in light and shadow to old 1940s noirs during the second half.

Elegance of clothes and settings sharply contrasts against all characters’ rotten souls, except for the protagonist’s young companion.

Coming to the epilogue, we reach the climax of the cruelty of the whole affair that drives the final nail into the protagonist’s coffin and then buries him still alive without mercy.

I honestly understand that today’s audiences are no longer used to movies of this kind but more cheerful and fast-paced things of easy entertainment.

I feel that Nightmare Alley is an act of love to a cinema that in 2021 is no more, to Guillermo del Toro‘s bravest and most complete movie.

I spent many days reading critics’ reviews and audience opinions around the Internet.

One thing that seems disliked is Bradley Cooper‘s character, who hides behind his pleasing smile gross darkness of evil madness.

The negativity of the protagonist has always been a problem with mass audiences, recalling how the insane Robert De Niro of Taxi Driver was received and later reevaluated over time.

As far as critics are concerned, the two significant dilemmas raised are the excessive two-and-a-half-hour running time and the director’s overly invasive and smug style.

Two problems that I did not suffer in the slightest since, as Sergio Leone used to say, stories last as long as they have to, and sometimes even half an hour of a movie seems endless if it is poorly made.

On the redundant and inflated style of elegance, I have already expressed myself: Guillermo del Toro manipulates images, and the protagonist, manipulates the minds of his victims.

The anti-commercial choice of retro photography and set design is not accidental but firmly intended and imposed by an auteur who knows no compromise.

In his cinema, the director pays homage to the art history that made him great, taking him from independent Spanish productions to lavish Hollywood Oscar catwalks.

Nightmare Alley brings the atmosphere of 1940s movies back to 2021, giving a rare gem to cinephiles worldwide thirsty for cinematic beauty.

If you didn’t like it, cinema that goes beyond mere entertainment probably isn’t for you, not that there’s anything wrong with that.

Vice versa, if you would like to give it an honest chance without starting to watch it without preconceived notions, I think this movie can surprise you with more than one satisfaction.