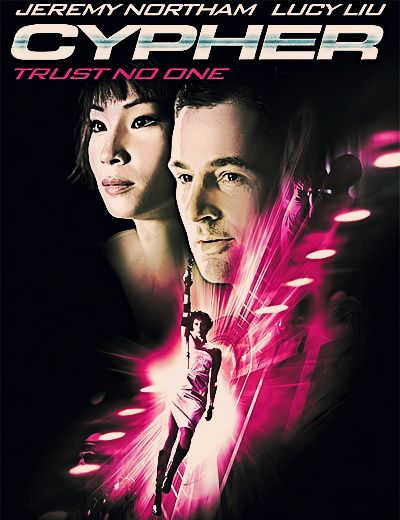 Cypher is an original 2002 cyberpunk movie that beautifully combines espionage and sci-fi with twists and turns.

The protagonist is an ordinary man unable to find work and living in a desolate American suburb since long.

Although he is married, he feels that his life is joyless and purposeless, dragging in the mundane daily routine.

Until one day, he unexpectedly has a job interview at Digicorp, one of the world’s largest corporations.

They offer him a particular assignment: to do industrial espionage against their biggest competitor, Sunway Systems.

Finally, seeing an opportunity to change his lifestyle drastically, he enthusiastically accepts the offer.

He thus begins to travel under an assumed name by attending a series of conferences and secretly recording corporate strategies.

During these lengthy and tedious sessions, he meets a beautiful and mysterious stranger who will immediately change everything.

At first, she seems to reject his advances, but then she reveals to him all these conferences are a sham.

The real purpose is to brainwash the participants by changing their personalities with drugs and subliminal hypnosis.

In this way, they become unwitting spies for Digicorp, easily overcoming the strict controls of Sunway Systems.

At that point, the man must pretend to play along with both corporations, trying to find a way to get out of that industrial war alive.

A minor filmmaker yet very talented

Throughout his career, Vincenzo Natali was sadly famous only for a brief period in the late 1990s.

In those years, Cube, a claustrophobic thriller that immediately became a cult film worldwide, was released in theaters.

After that, the Canadian director lost much of his popularity, but he certainly did not lose his talent.

Thanks to the fantastic realization, this movie is also compelling, poor in budget but rich in ideas.

The story takes up the cyberpunk themes and situations that all fans of the genre love.

Such themes will always work, like the technology-human interaction or the deception in reality perception.

Skillfully mixing authors’ styles such as William Gibson and Philip K. Dick, the director stages an exciting escalation of espionage.

Despite being a movie shot in just a month on a minimal budget, Cypher is a little gem of 2002.

Best of all, the plot continually takes different and unexpected directions, constantly succeeding in intriguing without getting stupid.

Not every director would know how to manage an intricate twist and turns maze, constantly changing characters before our eyes.

Of course, the little money shows in the poorness of some visual effects, yet this lends a B-Movie mood which I appreciate even more.

All aspiring filmmakers should learn how to create the right atmosphere and tell a complicated plot through clever, high-paced editing.

The lawless espionage of business

I remembered Jeremy Northam as the unstoppable lawyer in David Mamet‘s The Winslow Boy, a great legal movie set in the 1940s.

Here the actor starts as a humble everyman, dissatisfied with a life he does not feel belongs to him.

As the plot takes shape, he too changes into a different person, for example, beginning to drink and smoke with a more confident attitude.

Finally, finding a passion for what he does in his work also discovers love for Lucy Liu‘s character.

I admit that the actress does not have the most brilliant dialogue, but still, she plays a sexy and mysterious corporation femme fatale.

Her character remains ambiguous in a game of mirrors and high-tech cheating of the near future, wherein business and love all are fair game.

Until the end, she remains in the shadows, and it is never clear whether she is really the protagonist’s friend or just exploiting her for her purposes.

To sum up, Cypher is an intriguing and original sci-fi thriller, definitely one of the most underrated movies of 2002.

Its failure was probably the fault of poor distribution, being shown in few theaters and for too short a period.

Like a modern noir, it is full of twists and turns and role reversals in the excellent business game where the only rule is to win at any cost.

The visual style is very reminiscent of cyberpunk masterpieces such as The Matrix in the choice of colors, though it does not have a multimillion-dollar budget.

If you missed it, it’s probably not your fault, but try to give it a chance now that you know it. As long as intricate plots don’t scare you, you will definitely find something for you.