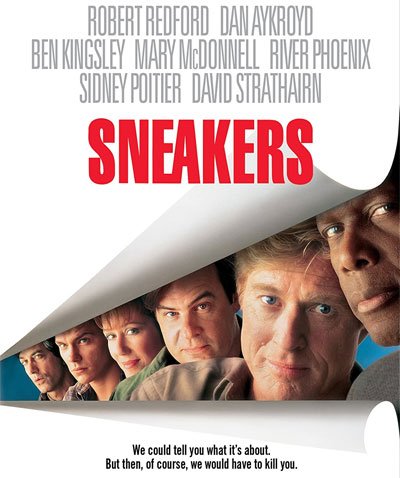 Sneakers is an entertaining 1992 spy movie with a stellar cast led by Robert Redford and Sidney Poitier.

The story is about a group of friends working together as security consultants, identifying weak spots for possible theft or fraud.

After one of their jobs at a bank, two men who say they work for Homeland Security show up at their offices.

They claim to know their leader’s true identity, who is actually a former young activist with a secret fugitive past.

To not turn him in, they blackmail all of them, asking in return to do some work for their country.

His friends do not back down and help him guard a famous mathematician and steal his valuable secret research.

The heist succeeds without any particular difficulty, snatching a mysterious black box from the offices by clever deception.

But when the job seems to end, the situation suddenly worsens, and some of their contacts die.

They only then realize what they have stolen: a universal decoder capable of infiltrating any computer system.

The entire group becomes the target of Russian and American intelligence services and a mysterious and anonymous criminal organization.

At that point, the friends can no longer trust anyone and will have to rely on their skills alone to get out of trouble.

But the piece of technology in their hands is so valuable that any government in the world would not hesitate a moment to kill them all.

Phil Alden Robinson writes and directs with good craft, albeit without any particular peaks of genius or creativity.

The director gets a great cast because of the fame of Field of Dreams with Kevin Costner a few years earlier.

While I recognize the success and excellent box office receipts, I was never a fan of that movie.

Being European, I don’t have a great passion for baseball, and the sports/fantasy mix doesn’t attract me.

In any case, a sequel had been rumored for the past decades, unfortunately for its fans never made.

Going back to Sneakers, this movie is a simple 1992 light comedy with an undemanding spy thriller.

I particularly love this movie, perhaps for the nostalgia effect of sympathetically seeing together so many stars I have loved over the years.

As mentioned, the spy plot is relatively straightforward in a more serene post-Cold War setting.

Relations between Russia and the United States then were more amicable, especially since the fall of the Berlin Wall, which split Europe in half for years.

The situations between the various characters are hilarious, while perhaps overdoing the action-drama in the ending.

The villain is a pleasant surprise, helpful in keeping the suspense high in the second half of the story.

It would be best if you did not think that this movie is a masterpiece; instead, I have become quite attached to something from my youth.

Nostalgia for the 90s starlets

Robert Redford is the main protagonist and the good thief and crook crew leader.

The actor engages in an amusing parody of his famous role as a spy in Three Days of the Condor with great irony.

He is always charming and funny; he relies not only on his friends but also on the sexy and intelligent Mary McDonnell, the only one who knows his true identity.

By his side is the former agent played by Sidney Poitier, an iconic actor of the 1960s crime thrillers.

His strict demeanor is very amusing, especially in contrast to the highly informal attitude of the rest of the troop.

The hilarious Dan Aykroyd, David Strathairn, and young River Phoenix round out the friendly group.

On the latter, I make one minor criticism, as, unfortunately, his jokes and minutiae are kept to a minimum.

All the gang members have criminal backgrounds and would be outsiders in the outside world, but they form their own families working together.

Finally, the bad guy behind all this mystery is Ben Kingsley, whom I wrote about recently for his role in the excellent An Ordinary Man.

Always stylish and flawless, the actor pretty much plays what the dark side of cheerful nerdy guys is.

Sneakers grossed over $100 million in 1992 against being a modest budget movie of $20 million.

Despite the years that have passed, it still works well with funny dialogue and a fast and effective narrative pace.

As far as I am concerned, it is fun retro entertainment, making the large cast its greatest strength.