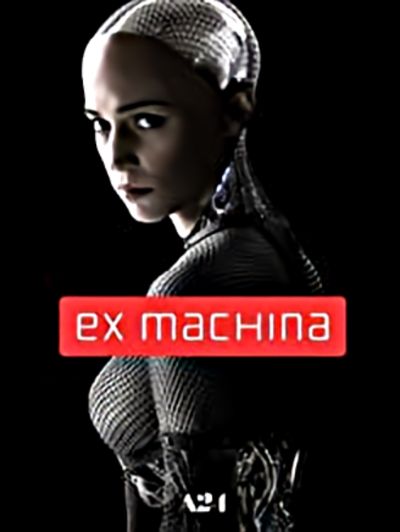 It begins with a humble programmer who wins through a contest a vacation with the CEO of his company.

Although rich and famous, he lives in a high-tech house amidst the mountains in the ultimate isolation.

Even the rare visitors or workers, for example, only arrive and leave by helicopter.

Excited about the career opportunity of working with the brilliant inventor, the boy accepts the strict security measures.

Once he arrives, he discovers that his job will be to test an artificial intelligence for a realistic new type of female android.

So he subjects her to a series of interviews, trying to determine whether she has a spontaneous and creative personality.

The robot girl goes beyond his expectations, surprising him with her sensitivity and curiosity about the outside world.

She also seems to have feelings for him, developing a relationship of complicity against her inventor’s common enemy.

Indeed, during some blackouts that allow them to talk unsupervised, the programmer discovers his employer’s darker and more sadistic side.

At that point, she begs to organize an escape before the destruction of her body and her memory erasure.

Unfortunately, numerous cameras control the house with selected access to every door for the owner’s exclusive use.

But perhaps the android is also manipulating the boy, demonstrating a devious intelligence that is dangerously human in this respect.

The beginning of a director with a bright future

Talented Alex Garland finally makes his solo debut after a career as a screenwriter for such excellent movies as 28 Days Later and Dredd.

For video game fans, he also wrote the story for DmC: Devil May Cry, perhaps not the best but certainly the most different of the eponymous gaming saga.

His way of writing science fiction takes me back to the origins of the genre by Isaac Asimov and Philip K. Dick.

Stories that look beyond their times, predicting a future of robotic automation and artificial intelligence.

His narrative choices wisely focus on a few topics, which reminded me a lot of Kike Maíllo‘s 2011 Eva.

Here again, we have few characters, yet well outlined psychologically in their actions and personal motivations.

The contrast between the cold precision of technology and the warmth of passion and love is exceptionally striking.

Clarifying in this sense is the anecdote of the girl who lives in black and white, later leaving her room and discovering color.

It is an apparently random but Android-related fable, as clearly evident in the ending that I don’t want to spoil.

This success fills me with joy when we finally get a story made with love and inventiveness, proposing something original.

The filmmaker blends everything into a fresh mix while dealing with previously familiar sci-fi situations and characters.

The script flows smoothly without any dead moments between deceptions and narrative twists that lead to an ending that will not please everyone.

Contributing to the movie’s success, in addition to the director’s skill, was, of course, a close-knit and very inspired cast.

Domhnall Gleeson is the classic upstart office worker who aspires to a better life and career, a sentiment his boss ably exploits.

The guy is intelligent and job skilled; unfortunately, he is equally naive and shy in his personal life.

It is not a coincidence that his boss, a boisterous and cynical Oscar Isaac, chose him for this delicate job.

The CEO needs someone who knows the mechanics of AI profoundly and can also manipulate him if necessary.

Indeed, the real purpose of the interviews is to push the android to deceive the boy, something the boss considers the best demonstration of his humanity.

Alicia Vikander is the real revelation of Ex Machina, who will launch her career internationally in more blockbuster movies from 2017.

Despite the high-tech half-machine, half-girl design, her appearance is not menacing but relatively innocent and straightforward.

Her presence inserts childlike sexuality into the plot that is never expressed, being a teenage girl castrated by her master.

Despite her apparent tenderness, she will not hesitate to be ruthless when she realizes her creator wants to terminate her.

Ex Machina is an exceptional three-way play of love and betrayal, making for one of the best sci-fi movies from 2014 to date.

The story is fascinating and evocative, and while somewhat predictable, it remains the surprising right to the end.

Combining genres such as thriller and philosophy, Alex Garland inspires all aspiring filmmakers by proving that you can be significant even with a small movie.