The Wrestler – Life Hurts More Than Punches In The Ring 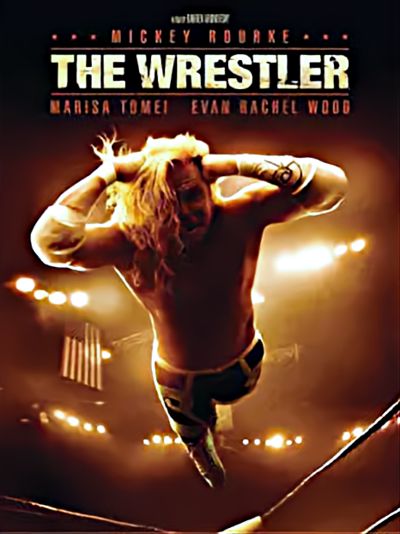 The Wrestler is an excellent 2008 sports and human drama movie starring a terrific Mickey Rourke.

Here, the actor plays a former wrestling star, The Ram, now far from his success when he was young.

Despite being at the limit his age allows him, the man continues to perform in small matches to scrape together some money.

Until one night, during a spectacular fight, he has a heart attack and ends up in the hospital.

The doctors make it clear he is in grave danger of dying next time if he does not stop wrestling.

Thereupon, the man finally quit and tries reconnecting with his daughter, who he has had for many years not seen.

Initially, he seems to reintegrate normally into society and find a possible mate, a stripper he habitually hangs out with.

But it is hard to forget his lifelong success, especially when he is offered a rematch against one of his old opponents, The Ayatollah.

This opportunity would be unique since the former fight is still very famous, and wrestling fans would like to see a second match.

At that point, the man must choose whether to give up forever the sport he has loved all his life or risk dying for a dream of glory.

A life of triumph and pain

The Wrestler was a highly successful movie in 2008, grossing more than $40 million worldwide against only a $6 million budget.

We could sum up the secret of this victory this way: Darren Aronofsky directing and Mickey Rourke leading the way.

With an unforgettable performance, the actor does not play; rather he becomes a character whose events closely trace his career.

All his fans over the years have witnessed the unraveling of this man’s body and mind because of a life where he wanted no limits or rules.

Rourke went from the sex symbol of the 1980s in 9½ Weeks or fantastic movies like Johnny Handsome to being almost forgotten within two decades.

Only since the 2000s, he returned on top with Sin City brute criminal and outstanding The Ram of this story.

Darren Aronofsky bets everything on the great actor building a movie sized for him, directing with an achingly realistic romanticism.

The director follows him relentlessly with the hand-held camera, giving no respite to a character who cannot find peace.

We discover the truth behind celebrity, where loneliness and inability to understand others isolate from everything.

In this sense, the meeting with his old wrestling friends is clarifying. It’s an old partnership, even if pretending to hate each other to fuel the ring entertainment.

After a lifetime spent in wrestling, the sport has destroyed these men in body and spirit. Many of them have all kinds of addictions, taking substances for pain and muscle growth.

Yet wrestling is what they can do, as The Ram says toward the end when in the ring:

The only place I get hurt is out there. The world don’t give a shit about me.

Are the minor characters so minor?

Just as important as the wrestler are the two women who live on the fringes of his life.

These two characters are similar in their distrust of men coming from too many failures in their experience.

Evan Rachel Wood is The Ram’s daughter, a girl whose fierce hatred of her father we initially struggle to understand.

Afterward, we learn how he has left her alone for most of her life to devote himself to his sports and nights of madness and drugs with his friends.

The actress is usually smiling and sympathetic in many other movies, while here, she is a cold woman closed off to emotions so as not to suffer again.

Equally compelling is the character of Marisa Tomei, a sexy stripper who initially seems almost an objectified woman as a background in the strip club.

The Ram approaches her more intimately, and we discover a middle-aged woman with a child and many disappointments behind her.

She would like a stable man but is unsure that choosing the former wrestler is best for her small family.

Only toward the finale, with repentance, does she realize that she is the last hope of salvation for the wrestler.

When he loses her, it throws him into the last battle, believing there is no longer reason to live.

The story has no explanatory ending, leaving us to decide on a final leap that fades into the end credits.

The Wrestler is a movie I have watched several times since 2008, yet I discover something new each time.

Because that’s what the best stories do: without overtly explaining anything to you, they say a lot with silence and dissolving into absolute blackness.

Movies Remakes – Famous Mainstream Copies Or Someone Worth Our Time?