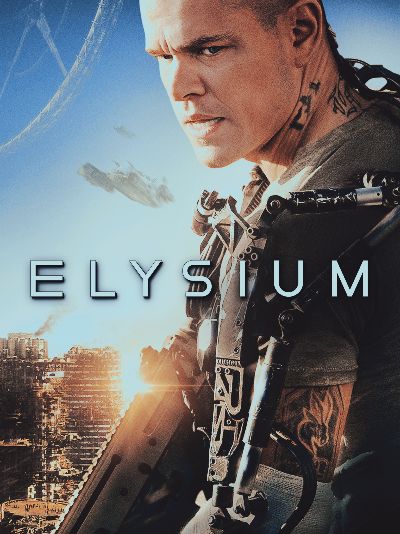 Elysium is a fascinating 2013 movie about a dystopian future where the struggle between social classes happens in sci-fi action.

Poverty and crime run rampant out of control, while people who want to make an honest living have to accept terrible working conditions.

An ex-convict with a history of petty theft starts working as a cleaner in an android production chain.

However, due to the poor conditions of the factory, he is exposed to a massive amount of deadly radiation.

The doctors quickly discharged him with pain pills, carelessly telling him that he only had a few days to live.

At that point, the man has nothing left to lose and decides to do something extremely dangerous.

Together with a band of revolutionaries, he will try to enter the only place where he can cure his disease: Elysium.

It is an orbital station for the elite of the wealthiest and most powerful in society, where there are medical capsules that could heal him in seconds.

At the same time, some of the officials, fed up with the bureaucracy, plot a coup in that apparent paradise.

Meanwhile, a worker’s friend tries to join the battle, hoping to cure his seriously ill daughter.

The boy then decides to empower himself by installing an exoskeleton directly into his body to combat the security forces.

But the revolutionaries will clash with a ruthless handful of mercenaries in the pay of the conspirators who want to take control of Elysium.

Neill Blomkamp directs a terrifyingly realistic and prophetic dystopian Sci-Fi where corporations decide the life and death of everyone.

As the protagonist discovers, people’s dignity and respect are worth no more than a pen stroke on a contract.

This does not apply to the rich people living in space, in luxury and affluence without any problem or disease.

On earth, the cities degrade more and more towards the model of poverty and desperation of the Brazilian favelas.

The revolution is obviously only a matter of time and opportunity with premises like these.

Neill Blomkamp‘s directorial work in building this world and writing this class clash is phenomenal.

As usual, he shows great talent in designing robots, weapons, and technologies with a futuristic and ordinary industrial look.

In addition, his action scenes are highly spectacular and entertaining, combining classy shoot-outs and fights.

The director’s style is purely classical in inspiration but with modern special effects and editing pace.

Elysium is the perfect future mirror of today’s world, a human ecosystem where social inequality is openly stated.

A disparity where a minority lives like gods while the rest go hungry crawling through the ruins of our planet.

Many critics demolished Elysium for its supposedly trite rhetoric of social struggle in this 2013 movie.

However, if it’s trite, doesn’t that mean it’s all true after all, maybe more authentic than we pretend not to see every day?

Even though Elysium has grossed over $280 million worldwide, it remains one of Blomkamp’s very few movies from 2013 to date.

It won’t be until 2021 that he returns to theaters with Demonic, an exciting mix of exorcism horror and science fiction that is again underrated.

Science fiction to think about our present

Matt Damon perfectly plays the ordinary person who would just like to work and live in peace, eventually being at the center of a revolution.

The actor begins as a humble, hard-working man who has no fighting political spirit, but everything changes after the incident.

Indeed, the indifference with which the doctors tell him that he will die is chilling, perfectly framing the value society places on his life.

Joining him is a young mother played by Alice Braga, with her young daughter already suffering from a terminal illness.

This is another simple but powerful metaphor for the modern world of medicine, which, if you are lucky, you never really know.

It’s no secret that those with money access the best care, while the poor sometimes can’t afford a simple checkup.

As the face of the privileged, we have the excellent Jodie Foster and her corporate accomplice William Fichtner.

Both plan to become absolute masters, hacking the orbital station’s computers and then taking command of its war droids.

But to do so, they need technologically enhanced mercenaries under the leadership of the insane and cruel Sharlto Copley.

The actor ironically was instead a victim of the system in District 9, undoubtedly the best movie of Neill Blomkamp.

Back then, he was a dull-witted bureaucrat who ended up joining the alien victims of human racism.

Regardless, if only for its entertainment side, I think it’s hard to find many better sci-fi movies than this one recently.

So I say let’s hold on to directors like this. Unfortunately, there aren’t many smarts to include a background for the plot instead of the usual villain vs. superhero.

London Fields – Love, Hate And Deception In An Unlucky Movie