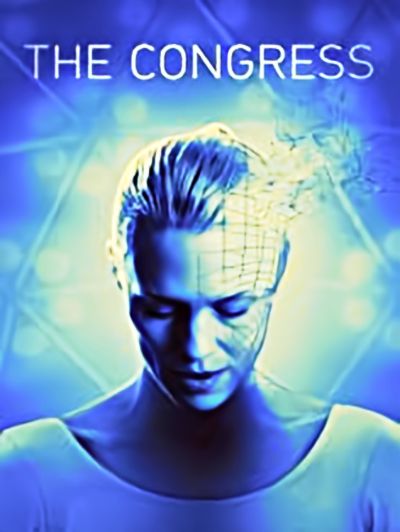 The Congress is a dystopian science fiction movie/cartoon from 2013, starring an impressive Robin Wright playing herself.

For many years the actress couldn’t find a job, getting used to a slow descent after a great career of fame and success.

Unfortunately, her family is in urgent need of money, especially considering the deteriorating health of her son.

Indeed, the young boy suffers from a severe disease slowly destroying his hearing and vision.

So when the production studios ask her to interview for a proposal, she is immediately enthusiastic.

The offer is not what she was expecting: to digitize her image to exploit it as in their films indefinitely.

Without a choice, she accepts the scan and becomes the star of a highly successful action saga.

Many years later, on the eve of her contract expiration, she goes to the annual congress of the production company.

Before entering, she is asked to inhale a vial that she later discovers a psychotropic chemical.

She will awaken in a world of imagination in the guise of a cartoon, able to mold reality to her desires in a seemingly endless paradise.

The magnificent fiction collides with the demand to mutate the contract so anyone can use or chemically become the actress.

As she balks at the proposal, some rebels opposed to this new science break into the party.

A friend saves her, but she overdoses from the vial, and doctors don’t know how to treat her.

She will awaken long after a long hibernation, cured by modern medicine that has since greatly improved her brain chemistry.

However, after decades of hallucinations, her desire to see her family again will awaken her overwhelming desire to return to reality.

Surrealist cartoons and the decline of humanity

Ari Folman writes and directs an incredible sci-fi fantasy, real and cruel to its characters and still delightfully romantic.

The only other movie I enjoyed this much, combining live-action and animation, was Who Framed Roger Rabbit by the great Robert Zemeckis.

However, in that case, it was a fun mix of old-fashioned comedy and noir, while here we have an inextricable personal drama of a mother.

The cast is fully immersed in their roles, and the cartoon sequences are more magnificent Salvador Dali than modern animation.

Robin Wright‘s epic unfolds over many years, with the actress unwilling to surrender to forces impossible to fight.

In this fictional world, humans are addicted to their intertwining dreams, never being able to know what is real.

However, the situation precipitates degradation outside. Those who do not want to use chemistry can only accept a lonely but real dying civilization.

The Congress is a poetic and romantic 2013 movie and a terrible dystopian nightmare, mixing harmoniously with genres.

Not surprisingly, it fond on a novel by Stanisław Lem, the brilliant author behind masterpieces such as Andrei Tarkovsky‘s Solaris.

In addition, there is a critique of modern production standardization, aesthetically perfect as they are empty of ideas.

A cinema where special effects are slowly getting the better of the rest, even replacing the actors in the flesh.

But is it also the stories and the characters’ psychology that conform to a greater simplicity towards the audience?

This movie isn’t simple and doesn’t want to be, but that just means it needs your attention every second.

I don’t think you want to blame it for that, do you?

Robin Wright works hard as a more mature actress, accepting the meta-cinematic challenge of playing herself.

In her role as an aging star, she harshly criticizes the artificial world of cinema that wants to remain eternally young.

Not surprisingly, at one point, the actress sings in her wonderfully sad voice a famous Bob Dylan song, Forever Young.

An immensely evocative scene where she flies with a loving friend into chemical dreams searching for her daughter.

Gliding through an imaginary airport, the two make love in front of the flames, finally becoming real people again for a brief moment.

Although critics appreciated it during the movie review at the Cannes Film Festival in 2013, The Congress failed commercially.

It was a pity for an original plot with excellent actors such as Harvey Keitel and Danny Huston in the cast.

Finally, we mention the consistently excellent Paul Giamatti in the small but crucial role of the actress’s family doctor.

Indeed, he will be the only constant over the years that carries toward a bittersweet ending open to our interpretation.

In conclusion, I recommend a film to all those who like to dream and think without having to attend the usual action circus of Hollywood explosions.

Instead, we finally witness something that loves to experiment visually and narratively, a brave story of loss and redemption.

Perhaps it will not be perfect, with a few moments disconnected from the rest in some defect.

But trying to bring something new to the audience is always an attempt to be admired and applauded, like the brave and beautiful Robin Wright.