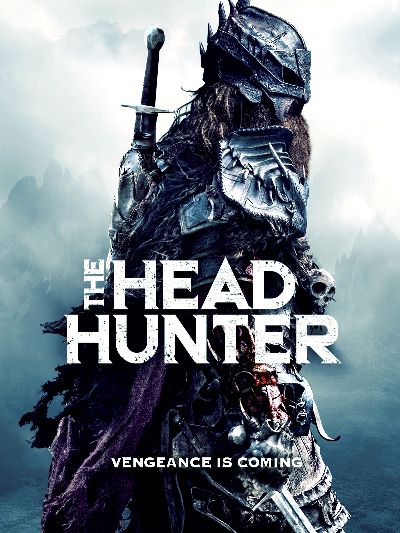 The Head Hunter is a 2018 indie fantasy movie that egregiously tells a dark tale of yesteryear.

It all takes place in the forest’s heart, where a lone warrior lives in the isolation of his dilapidated shack.

Day after day, he performs the same rituals as a machine. He prepares for the hunt and kills dangerous creatures each day, then decorates the wall with their heads.

Now and then, messages arrive from the nearby castle with bounties on some monsters threatening the kingdom.

The king’s knights do not like to deal with him, though they admire and respect his formidable reputation as a warrior.

His existence is an endless cycle of killing, forging by himself the weapons and traps he uses for hunting.

After each battle, however, he is inevitably lonely, healing the wounds of his fighting with a unique mixture.

The scars on his body and the head collection in his shack are the only evidence he exists.

Sometimes he goes to his daughter’s grave, weeping for not being able to prevent her death during a cold winter.

Until one day, opening one of the usual messages from the castle comes the bounty he has been waiting for so long.

Indeed, the cruel monster who killed his little girl so many years before is back, more thirsty than ever for human blood.

For him, therefore, the time of mourning is over, and it’s time to prepare for the longed-for revenge.

However, he will discover this creature is sneakier than he thought and exceedingly difficult to kill.

A life of pain and vengeance

I often admire the courage of some independent productions, even if sometimes the result is not that satisfying.

In this case, however, we are in the presence of a macabre little cinematic masterpiece that few have heard of, sadly.

Despite being a remarkably dark and cold atmosphere movie, The Head Hunter was a fantasy horror snubbed in 2018.

There is only one actor on stage the entire time, a tireless and unstoppable monster butcher who devotes his whole life to hunting.

An ominous aura of the natural locations amplifies the photograph’s alien style, almost like an alternate reality of our Middle Ages.

The simple and compelling plot is staged with care in every little detail of the costumes and sets, always believable and fascinating.

Equally unique is the choice of how the fighting takes place, always off-stage or blurred in the background.

Unless, of course, all the final part where the warrior goes hunting for the only head that matters to him.

Unfortunately, he cannot know that the clash will be unfair, learning the hard way what his true power is.

The pace flows slowly but is dense, with events continuous and pressing like a blacksmith’s hammer banging on the anvil.

Carrying the story forward are mainly the protagonist’s thoughts, silent and determined in his endless crusade.

The Head Hunter is a one-person show that starts and ends in the same desolation as a 2018 movie, where there is no hope of a future or redemption for anyone.

Director Jordan Downey creates a powerful narrative of a remarkable and adventurous epic in a little over an hour.

Despite working with only a $30,000 budget and a five-person crew, he achieves the most from every resource at his disposal.

Start with the warrior’s shack, a mystery to be discovered, full of references to events never told but only suggested.

The machines with which he builds his weapons and medical formulas are equally fascinating, emphasizing his intelligence beyond strength.

Showing his total isolation and self-sufficiency, we understand that the man has had no contact with anyone for years.

The avenging torments him daily and fills him with rage, which he then vents by tearing his enemies to pieces.

Christopher Rygh plays with great conviction and commitment to this knight at war against a seemingly endless army of monsters.

His size and physical posture are powerful and relentless, but from his eyes shines suffering that never has relief.

Indeed, when the camera is close to his face, the actor expresses his grieving father’s pain without saying a word.

When you have production as poor as Jordan Downey, you obviously have to choose what to focus your efforts on.

The director has chosen the path of storytelling and pathos, succeeding perfectly in creating something unique and original.

In conclusion, The Head Hunter is a pearl of 2018, a movie that succeeds brilliantly where many millionaire blockbusters often fail.

Tully – An American Life On...