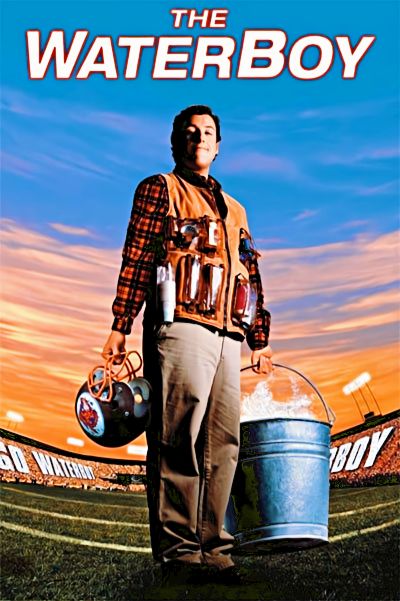 The Waterboy is a hilarious 1998 comedy, which is still probably Adam Sandler‘s most successful movie.

The story is about a stupid and shy boy who grows up being a waterboy for a football team where everyone treats him terribly.

He endures the humiliation without rebellion, but they fire him after years of faithful service as a grown teenager.

With no longer the job he loves so much wanders searching for something elsewhere, ending with his old team’s rivals.

But when one of the players insults him in front of everyone, something snaps in him, and he attacks him, knocking him out with one blow.

The whole team witnesses the brutal tackle without words, stunned by his incredible physical power.

At that point, the coach immediately put him in the starting lineup, tired of losing every game for years.

Suddenly, the shy boy becomes the absolute protagonist of all victories, triggering the immediate exaltation of the fans.

Starting to attend school, he also meets a beautiful and aggressive girl who looks pretty attracted to him.

However, his mom is overly protective and doesn’t accept that her little boy plays sports, trying to sabotage his career.

In addition, the old coach who had kicked him out, fearing losing the championship, tries to get him kicked off the team.

However, among many bad people, he now has many friends who side with him to make him play the final.

The last greatest challenge will be to convince his mother to be less obsessive, even about his new girlfriend.

Guaranteed entertainment for all

Frank Coraci is one of Adam Sandler‘s loyalists, working in many of his comedies over the years.

Among the few movies of the director without him, I recommend Murdered Innocence, an unusual revenge thriller of great atmosphere.

However, I also understand that his collaboration with Sandler was fruitful, working with an internationally recognized star.

Personally, I always find the American comedian’s movies funny, perfect for watching with the family for a relaxing evening.

Perhaps we can criticize that he never dared to go too far beyond this genre, always remaining in his safe zone.

The only exception was the splendid Punch-Drunk Love by the brilliant Paul Thomas Anderson, a romantic drama that was really out of the box.

Sandler showed a remarkable interpretive talent there, one I would not have imagined, unfortunately never seen again later.

Among his many youthful movies, 1998’s The Waterboy is the one I remember most fondly, having seen it countless times with my friends.

Maybe I’m not very objective, considering this kind of emotional attachment, but I do know every scene and line by heart.

Despite not being a lover of American football, I enjoyed the sports scene, even preferring soccer as an Italian.

I remember getting angry back then with people quickly dismissing the good Sandler’s work as stupid and insignificant.

But excuse me, every movie you watch must be a masterpiece of philosophy and psychological introspection?

There is also healthy and simple entertainment, and like it or not, Adam Sandler is a great professional.

Adam Sandler plays one of the most freeing and hilarious roles of his long career as a comedian.

He is a simple character and mistreated by all, who finally has his revenge and moment of glory.

The scenes where he charges with rage visualizing all his bad moments are hysterical and irresistible.

I would mention the coach angers him with Water sucks, Gatorade is better; literally a meme in my school years.

Indeed, encouraging him by spurring his sports nastiness is none other than the old Fonzie from Happy Days, Henry Winkler himself.

The actor loses his cool role and plays a coach full of fears after a life full of defeats.

Fears that he tries to overcome by helping the boy, thanks to sporting feats to redeem a life as a loser.

Fairuza Balk is the beautiful and dangerous thug girlfriend with no manners and doesn’t like getting told no.

Their relationship is both romantic and violently funny, bringing out the best in both characters.

Finally, Kathy Bates is definitely a level above the entire cast, being funny and creepy.

The apprehensive mom incinerates anyone who contradicts her in any way, blazing her murderous Misery-like eyes.

As mentioned, The Waterboy is one of the funniest and lightest comedies of 1998 and probably the best movie starring Adam Sandler.

If you are not looking for anything serious but just something to take away an hour and a half of laughter and wild tackles, then it is for you.

I’m totally familiar, but I think I’ll rewatch it, maybe right after recommending it to all of you.