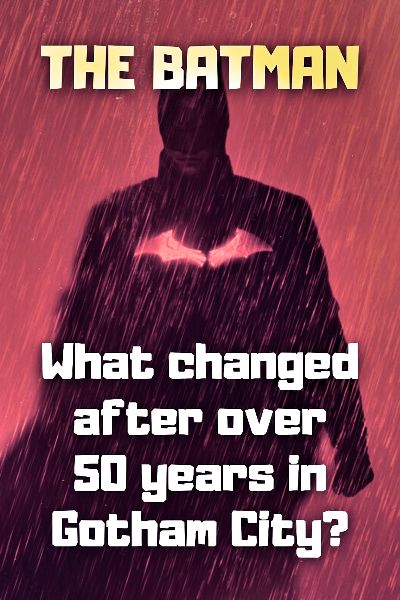 From comics to TV and then to the cinema

In 1966, a new series appeared on American TV, bringing to light one of comics’ most famous movie heroes, Batman.

The paladin of Gotham City had the friendly face of Adam West. A frankly not very well-known actor who suddenly found millions of fans.

Indeed, it didn’t take long for this character to move from our tiny home screens to the big movie theaters.

Batman: The Movie was the first in a new series of blockbuster movies generating billions of dollars worldwide.

Over time, this saga would change its skin, adapting to the public’s preference with a constantly evolving style.

However, the most beloved characters would always be those of this distant 1966 movie: Catwoman, the Joker, the Penguin, and the Riddler.

Above them all, hanging from a ledge in his gadget-filled suit, was him. Batman, AKA Bruce Wayne, the perpetually crime-fighting orphaned billionaire.

However, after his debut, it took almost twenty years before he returned to the top, in the hands of one of the strangest and most original filmmakers in cinema.

Tim Burton was still in his early thirties when Warner Bros. put a new Batman movie in his hands.

However, he was not unknown, as he had already won the favor of international audiences with the wonderful horror-comedy Beetlejuice.

A small masterpiece of the 80’s where the director proposed his new vision of fun and colorful gothic cinema.

So who better than a gothic master to rebuild a new Gotham City from scratch?

From that same film, Burton brings along Michael Keaton, an ironic and biting demon searching for fresh souls.

The actor will star in both of his Batmans, with an incredibly quiet and charming new Bruce Wayne.

Just as good are the women he will love during his adventures. It’s hard to forget sexy bombshell Michelle Pfeiffer as Catwoman and the always beautiful Kim Basinger.

Finally, we remember the superb villains of these two chapters of the saga, starting with Jack Nicholson and his Joker.

The Heath Ledger comparison is quick: Nicholson is a better actor, with a better director in a more exciting role.

This applies to Danny DeVito‘s Penguin as well. Indeed, their psychological motivations do not stem from the usual boring delusion of omnipotence and conquest.

Burton’s Joker is a crime artist, as he explains in the museum sequence, saying I CREATE ART UNTIL SOMEONE DIES.

The Penguin is a sick Bruce Wayne reflection, a lonely orphan venting his fury against a world that rejects him.

That’s why I will always consider Tim Burton‘s Batman more complete, managing to combine horror, fantasy, comedy, and romance in a way that others never will again.

From the stars to the stables, we now turn to the worst new Batman movies to ever set foot in theaters.

Needless to say, this is my appreciation, as audiences thought very differently by making them two box office champions.

Evidently, Warner Bros. wanted something very different from Tim Burton‘s gothic black comedy, and for this, they hired Joel Schumacher.

The American director preferred to play it safe, going back to the television series’s colorful, light, and funny style.

Respectively, his Batman movies were interpreted by Val Kilmer and George Clooney, to whom was added the new Chris O’Donnell as a very annoying Robin.

The stories are, in both cases, little more than pretexts for entertaining circus fights full of idiotic jokes against a host of new unlikely supervillains.

What angers me most is that these are fine actors like Tommy Lee Jones, Jim Carrey, and Uma Thurman, never so wasted in their respective roles.

To complete the park of villains, Arnold Schwarzenegger is added as Mr. Freeze, definitely the worst and most unbearable.

If someone can ever explain to me how it was possible to give the giant Austrian bodybuilder the role of a genius scientist, maybe I will be able to get over it.

Try as I might, I can’t find anything positive to say, except maybe the beautiful song Kiss from a Rose by Seal in Batman Forever.

Regarding everything else, we touch the bottom of the Batman saga, and Joel Schumacher and all the actors above handle the lowest point of their careers.

After Schumacher’s tragicomic (but fruitful) new epic, we now come to what are probably the most beloved Batman movies for audiences.

I admire Christopher Nolan since the earliest days of Memento, one of the instant cult movies from the late 2000s.

Seeing his classic storytelling style and refined image composition, I never thought he would end up directing superhero blockbusters.

Despite the public’s adoration of his trilogy, I find that the only truly accomplished Batman film is The Dark Knight.

Batman Begins has excellent character building and the criminal ecosystem of Gotham City but lacks a thick antagonist.

For mid-film, the Scarecrow, Cillian Murphy, seems like he might be, but disappears to confusingly reappear near the end.

His fear-obsessed psychologist might have been the perfect nemesis, but aside some cameos in the sequels, it will be short-lived.

Like Sylvester Stallone‘s character, Batman has lost his shape and is brutally defeated by the challenger who just arrived in town.

He must find eyes-of-the-tiger in a foreign prison, returning to fight the last round in a Gotham City under siege.

The Dark Knight is much better written, tracing the story of Dirty Harry with the mad killer blackmailing-threatening the city.

As mentioned before, Jack Nicholson‘s Joker remains more entertaining and exciting, while the though charming Heath Ledger looks like a strange version of Osama bin Laden in costume.

However, numbers speak again, and the high box office highlights that it is probably just me getting everything wrong.

If you felt like I was badmouthing the previous films, Zack Snyder‘s new Batman is worse.

Despite the flaws, Nolan’s trilogy still has great cinematic craft underlying it that makes it an enjoyable spectacle for anyone to enjoy.

Batman V Superman and Justice League, on the other hand, are a considerable step back across the board.

Even Joel Schumacher, if nothing else, not expecting to be taken seriously and always maintained a playful, childlike spirit.

Instead, Snyder’s movies have an awkwardly philosophical heaviness that, paradoxically, makes them even more ridiculous.

Joss Whedon would later complete justice League. However, an equally horrible extended version recently arrived, with the only difference being that it lasts an interminable hour longer.

Henry Cavill is just as stiff as Superman, as we had already seen in the awful Man of Steel, not coincidentally signed by the same director.

Jesse Eisenberg is instead a villain with the right face, but unfortunately, with all the wrong lines and timing, certainly not the fault of the excellent actor.

Looking to say something good, Hans Zimmer and Danny Elfman‘s music are excellent, giving pathos to a few scenes.

Once again, looking at the billion-dollar-plus box office worldwide, I’m probably as wrong as ever in my judgments.

Since, fortunately, on this site, I’m free to express my opinion, I’d say that these two movies sum up, at best, the worst that comes from American cinema.

A cinema that is all appearance and zero substance, closer to the fragmented narrative of a TV series rather than a film capable of living on its own, without sequels and marketing.

Finishing the grueling journey through 50 years of movies in Gotham City, we arrive at the new Batman of 2022.

Robert Pattinson frees himself from the aura of loverboy of the various Twilights, at least as far as the general blockbuster audience is concerned.

Film fans had already seen him collaborate with David Cronenberg in Cosmopolis and the phenomenal The Lighthouse by Robert Eggers.

He inherits the superhero cape under Matt Reeves‘ direction, formerly coming from the outstanding Planet of the Apes saga reboot.

In this case, the operation does not succeed as perfectly, but we are still talking about a film of entertainment more than decent.

Batman finally returns to detective origins, investigating with the police the mysterious murders and attacks of the Riddler.

A great choice that brings noir atmosphere to the story while still getting to the inevitable explosive ending.

Colin Farrell as the Penguin is a fascinating villain, although I wondered what the hell he has to do with a penguin.

Much better is Zoë Kravitz‘s Catwoman. The talented singer Lenny’s daughter is a sexy avenger with a sad past who beats better than Bruce Lee.

Simply fantastic John Turturro as boss Carmine Falcone, albeit in a perhaps too unnecessarily convoluted plot of corruption and murder.

Finally, Paul Dano plays an unusual and disturbing Riddler, who we would have liked to see much more time without a mask.

No matter, though, there will be time to see him in the equally inevitable sequel, with an ending that already anticipates the presence of a new Joker.

Indeed, the only sure thing about Batman is that someone is always preparing the following episode somewhere in Hollywood.

Involution – What would happen when...

The Head Hunter – An Endless...