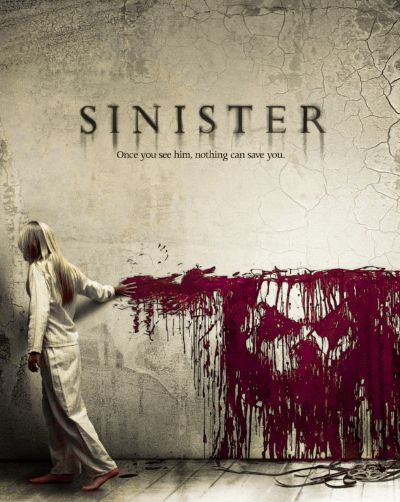 Sinister is a small but brilliant horror movie from 2012, starring the usually reliable Ethan Hawke.

It all begins with a writer and his family moving to a new town, where the man can work on his new book in peace.

However, he hasn’t told his wife and children that their new home was the scene of crime he is writing about.

Indeed, someone hanged an entire family from the big tree in their yard shortly before.

The only body to vanish into thin air is their youngest daughter, whom the killer presumably kidnapped.

The local community does not welcome them very warmly, well aware of the kind of scandalous books he writes.

Even the sheriff expresses his displeasure as soon as they arrive, suggesting bluntly to get out of their way.

Moreover, while they still are emptying boxes with their stuff, the writer finds something very strange in the attic.

It is an old Super 8 projector, together with which there are also a series of strange slides.

Mounting the device in his study and projecting one of these little films, he witnesses the hanging of the family that lived in his new house.

Then looking at the other slides, he discovers that similar murders have been committed over the decades.

In all cases, entire families died in horrific ways, and their youngest child then disappeared.

Believing he has discovered a serial killer, he will realize they are dealing with something older and more dangerous.

A director with many faces, not all compelling

I have to admit that while I recognize Scott Derrickson‘s talent, his earlier films didn’t entirely convince me.

For example, The Exorcism of Emily Rose had a refined direction and editing style, but the story was quite inconclusive.

Let’s forget about The Day the Earth Stood Still, a dull remake of one of the greatest Sci-Fi 1950s cults.

A whole different story is 2012’s Sinister, a truly inspired horror movie that is his best work to date.

I say this also considering his subsequent success with Doctor Strange, one of the most beloved characters in the Marvel universe.

We see his excellent work in constructing the scenes and the story’s rhythm, but we do not reach this perfection.

Many may disagree because Sinister is a small 3 million dollar production, while Doctor Strange is a rich blockbuster.

This horror has a more original soul, even without the grandeur of special effects and action scenes.

It’s not easy to keep the tension high for nearly two hours. At least if you don’t want to resort to the easy tricks of the genre, and yet Derrickson succeeds perfectly.

In addition to the omnipresent sense of mystery and dread, the story unfolds intriguingly, albeit with few characters and locations.

Criminal investigation credibly fades into a threat against a deviously metaphysical enemy hungry for children’s souls.

The twists and turns are well placed throughout the narrative, revealing gradually until a chilling and unforgettable ending.

Unfortunately, Sinister 2 will not equally succeed later, but somehow it will make us appreciate this 2012 movie even more.

Ethan Hawke confirms he chooses roles wisely for his career, such as the fantastic Predestination and the lovely Before Trilogy.

In this one, he plays a writer with a creative block who hasn’t been able to find inspiration for a successful book in 10 years.

All of his fictional works have been failures, so he returns to writing about the gory events that made him famous.

So even though he’s scared for his family by the horrors he discovers in the home movies, he can’t stop and give up on his story.

Juliet Rylance is equally good in the role of the wife, initially excited about the new beginning but then angry at her husband’s lies.

Finally, we have the small cameo of the consistently excellent Vincent D’Onofrio, the famous Gomer Pyle from Full Metal Jacket.

In a few video calls, we only see the actor as a professor who will finally shed light on the nature and origins of the malignant entity inside the house.

In addition, the excellent music by Christopher Young always intervenes at the right time without overpowering the silences that create the suspense.

Despite being a small production, Sinister did very well at the box office in 2012, resulting in a movie grossing over $80 million worldwide.

I haven’t had a chance to see it yet, but I will go to the theater with great anticipation.