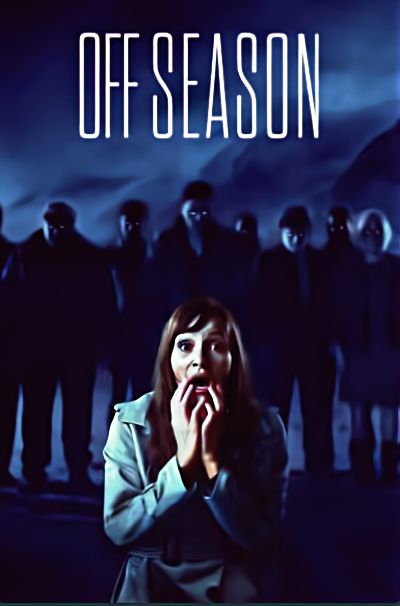 Offseason is a small and unknown horror gem from 2021, a movie in which we breathe the classic genre atmosphere since Lovecraft‘s distant days.

The protagonist of this story is a city woman who must return to the small island where her mother lies.

Indeed, the cemetery keeper tells her that someone vandalized her grave, and she must decide the best course of action.

The woman sets off with her partner, who is very upset about the incident.

Thinking about her mother’s last days, she remembers how she begged her not to bury her in that place.

But unfortunately, she had not been able to enforce her last wishes, as the will clearly state otherwise.

In her youth, the mother was a famous actress, but a physical and psychological illness got the better of her.

Once they arrive, they are just in time to cross the border that separates the island from the mainland.

The guard lifts the bridge right behind them, stating that no one will be allowed to leave or enter until the next season.

They go to the cemetery, eager to solve the problem quickly but cannot find the keeper.

When they part to make more haste, a thick fog descends on everything, and they can no longer find each other.

Therefore, the woman is left entirely alone, while all the island inhabitants seem to have mysteriously disappeared.

She soon discovers they mutate into hideous creatures paying a blood debt to an invisible and unstoppable sea demon.

No longer having a way out, she will need to discover her mom’s secret role in that story and her cursed legacy.

Mickey Keating is a very young director but already with an excellent horror filmography.

Offseason is his latest movie to date in 2021, and I would add that it is his best and most complete work so far.

So I’ll warn first those wishing for blood rivers and chair jumps of fear: there’s none of that here.

Citing a Lovecraftian type of mythology, the story unfolds about an omnipresent and omnipotent being that we will never be allowed to see.

We know the islanders of this island, a famous seaside resort, must feed this beast with the tourists’ vital force.

Once the season is over, the whole place goes into supernatural isolation. That’s when everyone becomes like unwilling zombies, waiting for the next harvest.

This movie’s horror grows with fear of the unknown and tension following the female protagonist step by step.

Even in her sporadic flashbacks, there is an excellent eeriness that continues and increases the scary experience on the island.

The memories of her mother are strange and ambiguous, combining the love she felt for her with the fear of her sudden outbursts of madness.

Her companion is not much help in calming her down, as he is skeptical of the tales of the curse that he considers a children’s fairy tale.

Also, minutes after they arrive, he disappears into thin air and we won’t see him again until the grand finale.

I won’t spoil the ending, but this community’s devotion to the demon is Lovecraft at his best once again.

If you love out-of-the-box horror with great respect for the classics, this is definitely a movie for you.

Strange is good, but only for few

Jocelin Donahue, whom I had already admired in the charming I Trapped the Devil, is the story’s main protagonist.

The actress faces hard work, omnipresent from the first to the last minute, without a single moment of rest.

The dialogues are not very many, and she has to act mostly of glances and sighs in the darkness and the fog.

Instead of the lack of words, Shayfer James‘ music replaces it, highly effective in emphasizing the uneasiness and sense of loss.

Equally important is the editing by Valerie Krulfeifer, for a story divided into chapters of clear literary inspiration.

Joe Swanberg has the poor companion role, poor because he only appears for a handful of minutes.

These are two face actors with the right mood for an unexplainable mystery story, with few but effective delirious dialogues.

Finally, Melora Walters, in the role of the mother, is the one who gives the best and most convincing performance.

It is no accident that it begins with a monologue of pure suffering and paranoia, overwhelming with a chilling scream.

Offseason is a strange horror that is not easy to explain, although it is among the movies that impressed me the most in 2021.

Its peculiarity precludes it from the general public looking for action and accessible explanations, but it doesn’t matter.

As long as we have writers and directors who set out to amaze us, Lovecraft’s ghost can rest easy.