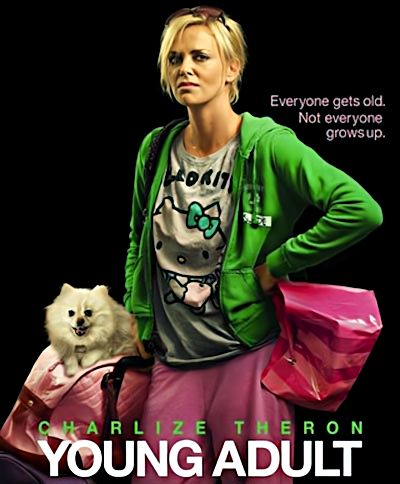 Young Adult is a 2011 bittersweet movie by Jason Reitman, both comedy and drama, starring the stunning Charlize Theron.

The actress plays a city woman, seemingly with a happy life and a successful career as a children’s book writer.

But actually, her job is depressing, and her personal life consists of casual nights with men disappearing the following day.

Determined to change her life, she returns to her hometown after learning that her ex-boyfriend has finally married.

She left years ago because of the small, stuffy city atmosphere, but now she’s ready to go down memory lane.

Convinced that her ex can’t be happy with his wife, she decides to do whatever it takes to win him back.

This obsession hides a trauma she has never overcome, even to the point of writing her book’s protagonist around him.

So she begins to reconnect with old contacts, showing up again all the people she hasn’t seen in years.

Among old friends and classmates, the only one she bonds with is a cripple victim of an assault years earlier.

After a bender together, she confesses her plan to him, which is to seduce her ex-boyfriend before her son’s christening party.

But her drinking problems will cause her fake confidence to crumble, ending in a painful placing in front of everyone.

Thus, the woman must face her worst weaknesses for once and wonder about who she has become.

Does her outward beauty correspond to a happy life, or is it just a facade to hide her despair?

The pursuit of happiness never ends

Already acclaimed for Juno in 2007, Jason Reitman directs another of the best American comedies of recent years.

An intelligent story more in his line than Ghostbusters Afterlife, describing the verge of an existential crisis behind entertainment facade.

We are talking about a personal tragedy within a series of funny situations but with a dramatic and unpredictable ending.

Young Adult is a sweet and bitter mature comedy about how a person with much potential can grow up wrong.

Indeed, safely in her bubble of sex and alcohol, the protagonist is mentally stagnant in her adolescence.

Although she is beautiful, intelligent, and has an excellent, respected job, she suffers daily from self-defeating neuroses.

In this way, the myth of the career woman deforms into extreme loneliness, carefully hidden under an aggressive vanity.

The work of the screenwriter Diablo Cody is also excellent in uncommonly depicting ordinary America.

And what could be more American than the school queen of the good old days?

The quiet provincial life is a mirror of what she has given up in her life, now trying to turn back the hands of the clock.

But you don’t cheat the calendar, and the first step to solving a problem is to acknowledge you have one.

Will the beautiful, unhappy writer be able to come out of this story better?

Young Adult is a 2011 movie without answers but an adult fairy tale with an ending open to many interpretations.

A comedy to think about our lives

We can say many things about Charlize Theron, but certainly not that she can’t pick out significant roles.

Over the years, the actress has shown us her many talents, from action movies like Atomic Blonde to sad and dreamy comedies like Tully.

Initially appearing as one of the many beautiful blondes for the usual romantic comedy, soon the music changes.

We slowly delve into her psychosis and insecurities, discovering her to be weaker and more lost than we thought.

The same goes for the funny character of Patton Oswalt, a victim of hatred and stupidity in a brutal beating.

From the beginning, he seems like the usual comic sidekick we’ve seen before, but everything changes when his atrocious personal drama emerges.

Together, the protagonist finally finds something in common, being two outsiders burdened by the weight of their lives.

On the other hand, Patrick Wilson is the charming ex-boyfriend who has always remained in the woman’s memory like a childhood obsession.

Along with his wife, Elizabeth Reaser, they struggle to understand the woman’s intentions, merely accepting her as someone they haven’t seen in a long time.

But in the finale, we understand how they all see the girl as a psychological case to be helped and not a real threat.

It is, perhaps, one of the many films destined to disappear under the large number of comedies that come out every year.

For this reason, I would like to recommend it to all those who may have never met it and missed a small piece of real cinema from the last decade.