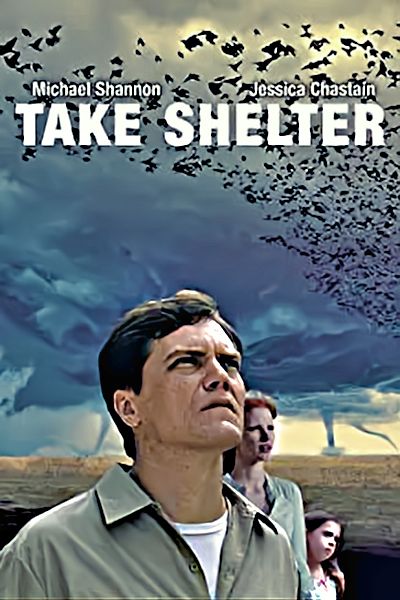 Take Shelter is a 2011 movie that not many people know about, although it has two stars, Michael Shannon and Jessica Chastain.

The story concerns the family of a man who lives in a small town in Ohio, leading a modest life and menial jobs.

Despite some financial difficulties and the deafness of their little girl, they live quite happily in the community.

However, the father begins to be tormented by terrible dreams and visions of an impending apocalypse.

The man tries to ignore what is happening, but these episodes begin to happen even when he is awake.

All these visions revolve around a great storm, which will drive people and animals crazy.

In order to feel calmer, he begins to build a shelter behind his house, accumulating supplies and gas masks.

At first, intrigued by his project, his wife becomes concerned about his growing obsession.

After stealing a digging vehicle, he also loses his job again to build this shelter.

With no steady paycheck left, the man spends the money they had set aside for their daughter’s hearing implant.

His wife tries to stand by him in this impossible situation, while friends and colleagues isolate and ostracize them.

At the same time, he can not stop thinking about his schizophrenic mother, figuring that he may have the same disease.

But although these visions may come from his imagination, no one can stop him from completing his shelter.

When the supernatural strikes an ordinary family

Jeff Nichols makes one of the most influential films in his appreciable filmography.

The director builds an excellent narrative structure based on the complex reality of the modern world for American workers.

Men and women struggle when problems come their way, sacrificing everything for the future well-being of their children.

Take Shelter is a thrilling, tense, and sensitive 2011 movie about a tiny family against a giant invisible threat.

While the film never emphasizes becoming adventurous, it maintains an ordinary, quiet daily routine that everyone can identify with.

The family’s slow descent into despair follows a believable and humane path, touching our deepest emotions.

Amid their financial and health problems, the supernatural element slowly creeps in until it erases everything.

The music fuels the tension at the right moments, always leaving the doubt between reality and the possible madness of the protagonist.

David Wingo‘s elegant melody punctuates the most important events with the right restlessness, without ever becoming intrusive and annoying.

The staging of a humble, hard-working American reality shows the beating heart of this intriguing mystery family drama.

Don’t think for a moment that this story is all about the anticipation that then comes to nothing substantial.

Far from it, the ending strikes with a few evocatively powerful images of a catastrophe on a finally human scale.

The two leads, Michael Shannon and Jessica Chastain, give their best with a phenomenal performance.

He is a worker who struggles with his personal demons, unwittingly dragging his family with him.

Their little money ends up in the man’s project, as he is sure that their survival depends on building the shelter.

It is a certainty that his wife cannot understand and suffers, although she still loves her husband but is equally concerned for their child.

She could have access to new treatments, unfortunately expensive, but that would finally give her the possibility of everyday life.

Their difficulty increased when they were up against the rest of the community because her husband lost his job.

At that point, it will become a countdown for the family under extreme stress to figure out if this madness is all true.

A long wait before they figure out if the apocalypse is really coming or the man is now hopelessly insane, and their family is gone forever.

Take Shelter is a movie virtually unknown to the masses, released in a few theaters worldwide in 2011.

However, I think it is one of the most influential films of the last ten years, absolutely a must-see for those who love slow, thoughtful stories.

It’s a drama mixing genres in style inimitable yet close to the ordinary kind of life we all live.

So I hope you have an open and enlightened mind to something new and different by giving this rare gem a chance.