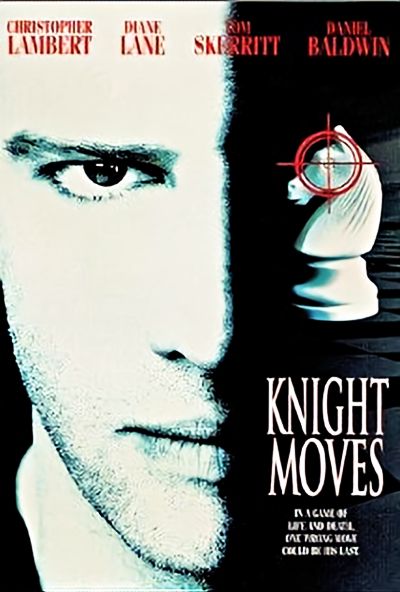 Knight Moves is a little-known thriller from 1992, despite the presence of international movie stars like Christopher Lambert and Diane Lane.

The story begins with a black-and-white prologue about two children competing in chess at a youth tournament.

After losing, one has a fit of rage and stabs opponent in the hand with a scoring pen.

Years later, the injured child has become a professional player on the eve of a major tournament with challengers worldwide.

Despite having a young daughter, the man is single and enjoys having many adventures with the many women who admire his talent.

When the police find the body of one of his mistresses, he immediately becomes the main suspect.

Indeed, she is just the latest in a series of women killed according to a specific horrific ritual.

However, the cops have to change their minds when the killer directly contacts the man in their presence.

Claiming his victims, he challenges him to play a game with human lives instead of pieces on the chessboard.

He may not know it yet, but the vicious killer is the child who had injured him during that tournament so many years before.

After his father’s abandonment, he later found his mother suicidal in bed, watching her catatonically bleed to death.

The trauma from experience drove the killer ritualizing murders by turning his victims into a copy of his mother.

After so many years, he wants to win the game that ruined his life, dictating the rules to his opponent.

The solid film industry from the 90s

While not a masterpiece, Knight Moves was a 1992 film that I recall thoroughly liking.

First of all, as a matter of fact, the characters and their relationships work very well in their simple fashion.

Of course, we are talking about very stereotyped roles that we have seen numerous other times, but this does not prevent us from enjoying them.

So we have the arrogant and charming chess player, the beautiful psychologist, the young and impulsive policeman, and the wiser and older one.

But what works best is the description of the murderer, although we never see him except in the final minutes.

Above all, without exaggeration, I loved the thrilling black and white beginning; really fantastic and terrifying.

It’s too bad after those exceptional early minutes; the movie goes on in a more normal, albeit elegant, less evocative style.

Anyway, I don’t remember many other stories that exploit the chess subject in this way, so it remains undoubtedly original.

The game’s theme with the murderer develops consistently with the growing serial killer madness, reaching a fair final climax.

Adding flavor to the mix are some hot sex scenes, where the Highlander protagonist shows off all his sex appeal.

In short, as stated above, do not expect a masterpiece, but one of those good thrillers of the 90s that unfortunately do not often happen today.

Maybe I’m not very objective because of my nostalgia, but the productions of that era all had something extra.

After so many years, the search for particular photography, slower and more thoughtful editing made movies like 1992’s Knight Moves something to remember.

Make your move and see it

Christopher Lambert, the charming main character, was looking to revive his career after the awful Highlander II – The Quickening flop.

Here he plays a famous undefeated gambler, whom other men hate and envy for his skill and unpredictable moves.

In his house, there is only his loving little daughter and an old player who helps him prepare the strategy of his games.

Other people come and go in his life, from mistresses to rival players, none of whom stay too long.

He lives as he plays on a chessboard, protecting his important pieces and ruthlessly insensitive to everything else.

Conversely, Diane Lane is the charming psychologist who approaches him for questioning because of the murders.

Initially annoyed with the player’s swaggering attitude, she falls in love with him and his little girl as she gets to know him better.

Unfortunately, this feeling puts her on the potential victims’ list for the psychopath’s massacre, all former girlfriends of the protagonist.

Finally, Tom Skerritt and Daniel Baldwin are the two cops who investigate the murders, focusing immediately on the chess player.

Speaking of stereotypes, they perfectly embody the good cop/bad cop pair, but they do it in an entertaining way.

The director Carl Schenkel handles the timing and twists of this thriller well, revealing the killer’s plot from the start.

In the ending, he can’t avoid a bit of action, perhaps too much, but still doesn’t ruin the experience of the story.

Unfortunately, not many appreciated Knight Moves as I did in 1992, and it was a movie that failed at the box office.

But given the numerous competition from crime and serial killers, today I would definitely recommend it as above average.