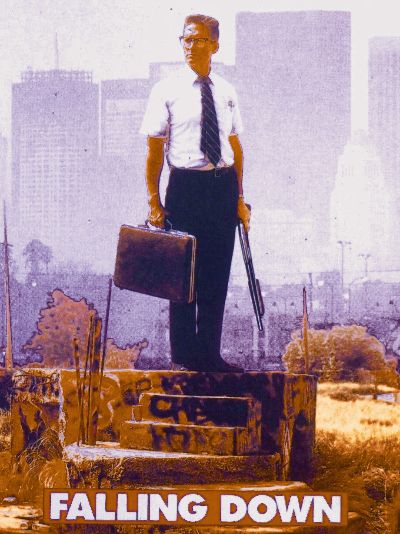 Falling Down is a 1993 movie starring an extraordinary Michael Douglas and Robert Duvall in a beautifully crafted urban thriller.

It all begins one day in the middle of the impossible morning traffic in Los Angeles.

The cars don’t move, the confusion is unbelievable, and the heat is stifling while the air conditioning doesn’t work.

Suddenly, among all these people in line, a door opens, and a man gets out and walks away.

Leaving his car in the middle of the street, he walks into a small store to buy a coke.

But after a trivial altercation with the shopkeeper, he demolishes his store and again drives off carelessly.

Although she kicked him out long ago, the man is firmly determined to return to his ex-wife’s house.

So nothing can stop him from being there for his little girl’s birthday, whatever it takes.

The only one who senses something strange in the trail of crimes he leaves behind is a policeman nearing retirement.

His colleagues mock him, believing that he is only looking for some action on his last day of service.

But in the meantime, the man is becoming alienated from reality, relentlessly ravaging everything he believes stands in his way.

He’s now more dangerous than ever after stealing a gun-filled bag from a thug gang trying to rob him.

As the cop and the lunatic inevitably converge toward a crazy final duel, the city’s insanity seems almost indifferent to their madness.

Joel Schumacher has always had a fluctuating talent, alternating between splendid titles in his filmography and others that I have appreciated much less.

I remember especially to have loved Flatliners and The Lost Boys, two very different and original horror movies.

Unfortunately, the director has also brought unforgivable stuff to theaters like Batman Forever and Batman & Robin.

The only memory is that it was a terrible break between the otherwise good Tim Burton and Christopher Nolan sagas.

Maybe, who knows, it will be my taste to be wrong since they were an immense half-billion-dollar box office success.

Falling Down is one of his best movies, an instant cult since I saw it at the cinema in 1993.

Although some critics and the public accused it of too much violence and racism, it was generally well-received everywhere.

Indeed excellent grotesque humor dampens much of the violence, and the superb direction gives a very adventurous pace.

The protagonist’s frustration mirrors an entire generation’s anger with the old values of hard work and family.

Gradually, the madness escalates to the devastation of a construction site with a bazooka in a hilarious scene.

Finally, when we arrive in the sunny seaside area of Venice, the time for a good Sergio Leone-style gunfight also comes.

That’s a fitting conclusion for someone, as he says, crossing the border and traveling on the other side of the moon.

Two men and generations on a collision course

Falling Down is practically a western movie with a long-distance duel between two great actors at the height of their careers in 1993.

Michael Douglas is the sensational leading actor, an international star coming from the great success of Basic Instinct.

His role immediately captures our attention as an ordinary person finally free from conventions and laws for a day.

In his crazy journey, he genuinely believes doing justice to the distortions of our society he swallowed all his life.

This makes him an atypical villain instead of just a smug madman of his cruelty and violence.

In those days, however, Robert Duvall was far from the glory of the wonderful surf-loving colonel in Apocalypse Now.

Engaging only in secondary roles in movies like Days of Thunder, the last performance of his that I remember was in Colors and the equally good Sean Penn.

In this case, he is instead the shy policeman who bears the anguish of his colleagues and an unbearable wife.

But just like the protagonist, on his last day, he rebels by carrying out his investigation against everyone.

After the long journey through the city, their face-to-face is the cherry on top of a great urban adventure.

The confrontation lasts a few minutes, with the suffering madman about to kill his wife and daughter.

But their touching dialogue erases all the previous violence seen up to that point, bringing the heroes back to a human dimension.

To conclude in a few words, whether you were born before or after 1993, Falling Down is a cult movie that you absolutely cannot miss.