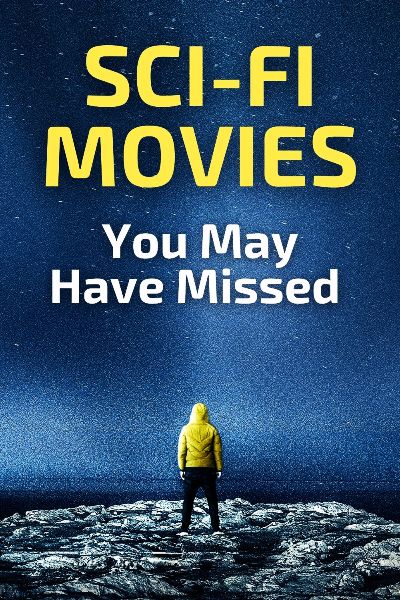 After last week’s lengthy article on the great classics, today, we instead discuss some sci-fi movies you may have missed in recent years.

These small productions deserve much more attention because they do some fascinating works even with little money.

You should expect a cleverly written plot and a direction that perfectly builds the much-talked-about suspension of disbelief.

It is a necessary condition for Sci-Fi to represent what is not (yet) possible in the real world.

Indeed today, we will see men capable of killing only with their presence, impossible time loops, and futuristic AIs capable of manipulating the human body.

As mentioned, these are little publicized sci-fi movies, so it’s nobody’s fault if you missed them.

But now that you know they exist, will you be able to ignore them?

We start with a movie in a not-so-distant future, where many things of our present are not missed.

Many people have electronic implants grafted into their bodies, in one way or another, becoming more and more connected and dependent on technology.

In this world, our protagonist is an ordinary mechanic without any artificial grafts who still likes to do things with his hands.

So it’s a tragedy for him when he ends up paralyzed from the neck down after a brutal attack by some thugs, who also kill his girlfriend.

No longer having a purpose in life, the man tries to commit suicide by overdosing on drugs, barely surviving.

But that’s when one of his clients comes to his aid, a bright young entrepreneur who heads one of the world’s largest corporations.

The young man offers him to try a new technology called STEM that could allow him to move again.

Initially reluctant, the man ends up agreeing to have doctors insert a chip into the base of his neck that will reactivate nerve impulses in his body.

After the operation, however, he discovers that it is actually artificial intelligence, which even starts talking to him.

While watching a video of his street assault, STEM points out a detail that could identify one of the criminals.

But having to keep his illegal operation a secret, the man cannot possibly contact the police.

He then decides to start investigating in person, tracking down the suspects and then finding evidence to frame them.

But the deeper he digs, the more he realizes that his tragedy is part of a much larger and more dangerous plot.

Clashes and sci-fi as much as you want

Upgrade is a low-budget action sci-fi movie that you may have easily missed, given its poor theatrical release.

Despite the low money, this story has an awesome cyberpunk vibe with a really intriguing story and characters.

Much credit goes to the director and screenwriter Leigh Whannell, former author with James Wan of the Saw saga.

After a slow introduction to this futuristic world, the pace picks up without ever becoming stupidly exasperated.

The numerous action scenes live of some excellent coherences as violent as funny, with the protagonist not in control of his movements.

In those moments, the artificial intelligence intervenes and increases the strength and speed of his host, controlling his every movement.

So suddenly, this ordinary man becomes an unstoppable fighting machine with an ironic face while grinding one opponent after another.

Obviously, there are numerous references to other films of this genre, but it retains its fascinating originality.

Good performance by Logan Marshall-Green, a believable humble mechanic in a world where his services are no longer required.

Not bad also the supporting cast with Betty Gabriel as the suspicious detective and Harrison Gilbertson for the brilliant young computer genius.

It all comes together in a flavorful cauldron of revenge crime for what you could perhaps call a perfect B-movie.

However, everything goes away with a solid idea and staging, and you did your job admirably.

We switch from an excellent action movie to a slower, polished atmosphere, with something missed over the years.

The story is about two brothers sharing a house and working together, but they have a bland and inconclusive life.

Both had left a small community dedicated to a mysterious religious ascension many years earlier.

The farewell had not been the friendliest, having given a television interview where they were described as crazy.

However, one day they receive a videotape with a recording of a girl from the community, who invites them to come back.

Considering their drab personal situation, they decide to set out on their journey with nothing to lose.

Their old acquaintances welcome them with great kindness and friendship, inviting them to stay as if nothing had happened.

Initially, the tranquility and peace of that group put them at ease, considering the possibility of never returning home.

But very soon, they realize that strange things are happening in that place, where there is something deeply wrong.

Unexplained phenomena happen like strange photographs raining down from the sky, inviting them to find the solution to a riddle.

Things are complicated when one falls in love with a girl and wishes to stay; meanwhile, the other grows restless and scared.

However, when they part ways, he gets lost in the woods finding other people literally trapped in that cursed place.

As the situation becomes more absurd and desperate, he will try to go back to save his younger brother before it’s too late.

The low-budget strength of independent sci-fi

The Endless is a sci-fi movie that I recommend to anyone who misses The Twilight Zone‘s old series.

It has precisely the same constant sense of wonder and anticipation, with a smooth and satisfying narrative.

Each scene offers some compelling idea spurring us on to continue a story that we initially understand little about.

Everything speeds up in the middle, and the plot opens in earnest, and the unseen valley’s presence steps in.

It’s a capricious deity using human beings as puppets; we don’t understand why, just for fun, as one of the characters suggests.

If you have not already heard of this, even less will know Resolution, of which this film is the direct sequel.

Another excellent sci-fi you will have missed, again with the superb duo Aaron Moorhead and Justin Benson directing and writing.

These two young writers amazed me with their humble creativity, and I already recommended them for the romantic horror Spring.

In addition, they play the two brothers, similar to each other but with very different ages and personal motivations.

Unfortunately, I know perfectly well that this kind of film is not as loved as the blockbusters by general public.

Not that I want to impose my preferences on others, I wish they were successful enough for these directors to continue working.

Since many don’t even know these gems, I’ll be satisfied if one of you watches and appreciate them like me.

If previous suggestions were small sci-fi productions, this movie you may have missed is so budget-limited to be almost amateurish.

It begins with a man waking up after an accident, with no memory of who he is or what happened.

Laboriously getting to his feet, injured but not seriously, he returns to the road and sees a car approaching.

The man looks for help, but he finds that the driver suddenly dies when he looks inside the cockpit.

He very soon discovers that anyone who comes within a certain distance of him dies just as immediately.

Initially terrified, he locks himself in his house, trying to make no one comes near not to kill anyone else.

But someone knocks on his door and survives, a woman who seems to be immune to his lethal power.

She also seems to have no memory of the previous night, so the two go back to the incident scene looking for answers.

As the puzzle pieces come together and some memories resurface from their amnesia, the police begin to hunt them down.

Unwittingly, they leave behind some other dead bodies, who inadvertently got too close without knowing what they were risking.

When they are finally arrested at her boyfriend’s house, events escalate into a massacre, and the two must flee together.

How many directors have we missed over the years?

Initially starting with science fiction, we then slide into a romance between the two survivors.

After that, the story even veers into crime with serial killers, not missing a couple of good twists and a great ending.

With these premises, it could have become a big mess, but instead, the mixture of genres and situations works.

The protagonists are two simple ordinary people, apparently unknown to each other, who have a terrible power on their hands.

How to handle something that can kill anyone without even touching them?

From this premise grows the whole plot around a simple but effective idea.

The tension is always for what can happen at any moment, and the thriller grows as they remember everything.

The two leads, Diego Klattenhoff and Charlotte Sullivan, have excellent chemistry, and while not phenomenal actors, they adequately play more than decently.

The few characters and rural locations are also sufficient for a simple plot that is intriguing to the cathartic conclusion.

Caroline Labrèche and Steeve Léonard, at the screenplay and direction, handle the narrative pace well, and the twists and turns are engaging until the last scene.

Unfortunately, these two more directors were only missed in television productions, although they had shown talent in this little sci-fi movie.

But who knows, maybe by getting the word out about this Radius, we might convince some producers to believe in them?

I hope so for those who achieve a lot with so little at their disposal but are often forgotten.