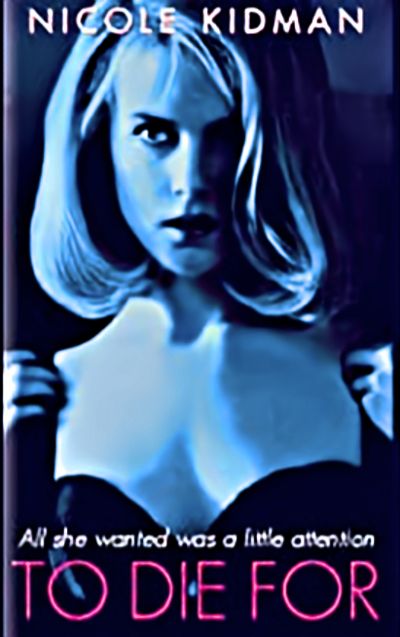 In 1995 To Die For was released, one of Gus Van Sant‘s most mistreated movies starring an exceptional Nicole Kidman.

The actress played a beautiful, intelligent woman willing to do anything to realize her dream of being a television star.

Her dream takes time; however, she needs a roof over her head and a hot plate on the table every day.

So she agrees to marry a man she doesn’t love in the slightest, but who can provide for her financial security as he owns a restaurant.

After a few years of a monotonous and repetitive life, the woman sees an opportunity to appear on TV, starting to present weather reports.

Very soon, however, even that job is no longer enough for her, as she longs for a real opportunity to succeed.

Therefore, she gets the idea to conduct interviews with local youth, to paint a portrait of the real America of today.

These commitments take her long away from home, so the husband demands drop everything and be a good wife again.

Realizing he is only an obstacle to her career, she sets up a ruthless plan to take him out.

Seducing the straggling boys with whom she is making a documentary, she then asks them for help in killing him.

Bewitched by his beauty and promises of success, the group carries out the murder quickly and brutally.

Unfortunately, the boys end up in jail while the lies and deception fall apart around the woman.

The magic of independent cinema, but with money

Although it was a flop in 1995, To Die For is among Gus Van Sant and Nicole Kidman‘s best movies.

The direction halfway between comedy and thriller enhances the actress’ talent to the extreme.

Struggling against numerous good colleagues, she eventually pushed hardest for this part.

In this grotesque parody of the American dream, as often happens indeed, the dream inexorably becomes a horrible nightmare.

The aesthetic perfection of this woman is absolutely the opposite of the moral and emotional void she has inside.

Exactly as it happens in television, a circus that is open 24 hours a day and where the jesters are willing to do anything to get ahead.

To Die For marked Gus Van Sant‘s 1995 leap from small independent productions to the big budgets movies of Columbia Pictures.

We can still see all the power of his essential but elegant style of someone who knows what he wants to say and how to say it.

His lucid gaze penetrates our society, especially with the interviews of the various characters edited in a delirious documentary.

A young but talented Joaquin Phoenix emerges among these underdogs, rising even to Emperor in Gladiator in a few years.

The actor is the face of a dreaming generation on TV, unhappily confused in this romance with a dirty manipulator.

Lastly, as a curiosity, let’s note the small cameo by fellow filmmaker David Cronenberg in the last story moments.

I won’t describe his role to avoid spoiling the literally glacial ending in a story that you must experience firsthand.

The plastic beauty of modern reality

To Die For is a black comedy that doesn’t just scratch; it slices through the respectable morals of television before and after this 1995 movie.

Nicole Kidman is seemingly everything a man could dream of as a wife, beautiful and sexy as hell.

Unfortunately, her pathological desire for fame rises above her own life, not to mention the lives of others.

Everything is expendable to appear at all costs on television; otherwise, as the same protagonist says:

A woman who is a complete psychopath, seeing every human relationship as one to exploit for her ends.

Everyone becomes expendable pawns in her hands, from her husband to the silly young boys she’s making a documentary about.

Matt Dillon is equally perfect playing this simple-minded, ignorant man who believes he is living the American dream.

Unaware of his wife’s homicidal madness, the man spends his time in his restaurant mocking TV personalities.

All this, of course, not knowing that he will end up being paradoxically a victim of that world that he believed so fake and distant from him.

Gus Van Sant tells how television is a prison in both senses for those who watch and work in it.

In short, To Die For is a must-see 1995 work of art, embodying the director’s movie style and feelings in a simple but disturbing distorted reflection of our society.

It’s a fable with no happy ending for anyone, as the cold reality against the bright colors of TV underscores.