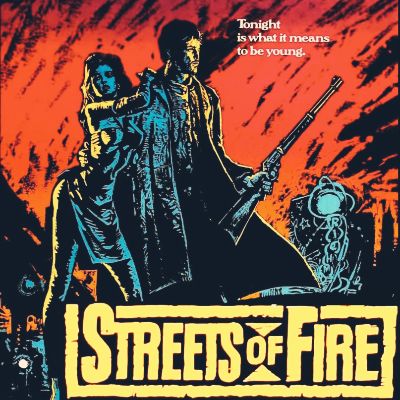 Streets of Fire is one of the least remembered movies of the great director Walter Hill, in 1984 on the wave of the success of The Warrior.

The story begins with a famous singer who returns to the neighborhood where she grew up as a girl to do a concert.

Some time has passed, and many things have changed, but many people remember her and come in large numbers.

Unfortunately, in the middle of the party, a violent gang of bikers breaks in and savagely beats up the staff and kidnaps the singer.

Her boyfriend’s manager realizes that it is useless to go to the police since they’re afraid or corrupted by criminals.

Short on time, he contacts a mercenary recently back in town which once got into a relationship with the girl.

Initially dubious, the man accepts and also recruits a woman/soldier to help him in the rescue mission.

Together with the manager, they enter the most infamous and dangerous neighborhoods until they attack the bikers’ hideout.

After a violent shootout, they manage to get the singer out but not before the psychopathic leader of the gang sees their faces.

Amidst the flames of his destroyed club, furious with rage, he swears revenge for this defeat.

He also assures he will soon come to reclaim the girl who, in his madness, he believes belongs to him.

Hijacking a van by a musician group begins a long runaway night from the criminals for all of them.

Moreover, the police consider them just as dangerous, having set fire to the whole neighborhood fighting the bikers.

Finally, the mercenary realizes the only way to end it is a deadly showdown before the whole town.

The modern fables of a mythological director

His storytelling and aesthetic appeal style have always been impeccable, within tales of easy entertainment for the general public.

The Warriors is definitely his most famous movie, followed shortly after in 1984 by Streets of Fire.

Unfortunately, it did not have the same success, literally torn to pieces by both critics and the public.

I have always struggled to understand why since I consider it just as exceptional and entertaining.

For the occasion, the great guitarist and composer Ry Cooder composed an entire album of songs that highlight each moment of the story.

The story retells the classic fable of the handful of brave men on a mission to save the beautiful princess in a modern key.

Indeed, as it says right at the movie’s beginning, it is a rock fairy tale.

The action scenes are, as usual, spectacular and exciting, in a montage of great muscular rhythm.

Much of the story occurs amidst the club’s nighttime electronic lights and the city’s various districts’ absurd colors.

Finally, the biker gang is perfect, all bad guys with the look of Marlon Brando in The Wild One.

In short, 1984’s Streets of Fire is something lost to many generations, luckily now easily catchable on streaming.

After a career of supporting roles and TV series, Michael Paré finally plays the character of a lifetime.

A tough-jawed soldier whose past we’ll never really know.

However, we know he’s skilled with weapons and at fighting, things he’ll have ample opportunity to do throughout the story.

In short, a simple but very effective character, being a hero of few words and with an exciting personality.

Saying that he fights for money, in reality, what moves him is the love for the very young Diane Lane, a crush of his in the past.

The actress is as beautiful as life itself, even if her character is not always entirely positive.

Sometimes we also see her arrogant and a little stupid, which I appreciated because it makes her more human and believable.

Outstanding is Rick Moranis as the combative manager, a small-man who doesn’t get run over by the violence of others.

He is often annoying and irritable, completing the rescue cast along with the violent and likable bartender/soldier Amy Madigan.

Finally, Willem Dafoe dominates the entire cast as the superb villainous ringleader who turns the whole town upside down.

The final duel now morning, hammered out in the streets among the crowd, is worth studying in all film schools.

As mentioned, Streets of Fire was a box office flop in 1984, but we can always turn this movie’s luck around if we want.

Who knows, maybe by starting a little general word of mouth, it may be that the big productions will return to invest in movies of this type.

Walter Hill is still alive, ladies and gentlemen, and as he proved with The Assignment, he is still perfectly capable of doing his job.