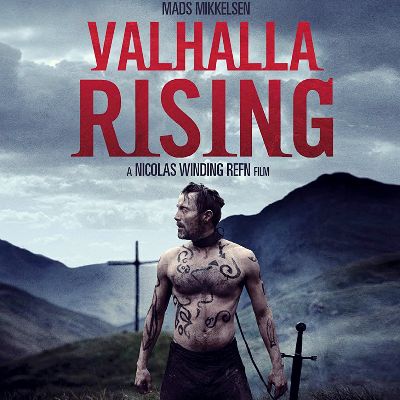 Valhalla Rising is an evocative journey into the human soul released in theaters in 2009 for what is my favorite Nicolas Winding Refn movie.

The protagonist of this story is a mute, nameless warrior, who later everyone will simply call One Eye.

We don’t know how long he is in chains while a clan of Viking warriors drags him into fighting arenas.

They get rich by organizing blood clashes with other warriors, from which the mute prisoner always comes out a brutal winner.

One day, One Eye breaks free, slaughtering all his captors except one young boy, whose life he spares.

Not knowing where to go, the boy begins to follow the warrior into the vast and desolate Icelandic heath.

Soon after, they meet another clan of Vikings who convince them to join in the great Christian crusade.

Once they reach an agreement, the group embarks, sailing out to sea as quickly as possible to reach Jerusalem.

But an impenetrable fog envelops their ship, drifting without wind while supplies become increasingly scarce.

Believing to be a curse because the boy, the group tries to kill him, but the mute warrior protects him.

When everyone has almost run out of hope, the fog finally clears, and they discover they are sailing on a large river.

The land seems green and promising, so the Vikings decide to build a new Jerusalem instead of joining the crusades.

However, that wonderful place is not at all uninhabited, and an invisible army of enemies persecutes them by attacking them.

Remaining increasingly fewer and more tired and wounded, they all discover that their new promised land is hell on earth.

Madness and holiness in an endless epic journey

With 2009’s Valhalla Rising, Nicolas Winding Refn signs one of his best movies, an epic tale of wild men and religious fanaticism.

Image construction is perfect, structuring in each frame a painting that you could elegantly hang on the wall of your house.

This journey winds along a path of violence and madness that humans nature has not yet been able to tame.

With a budget of just over $5 million, Refn forges a work conceptually opposed to the Hollywood way of thinking.

On stage, we have only men and natural locations, without the need for expensive sets or even horses, for example.

Yet aesthetics is more critical than narration, with little dialogue and deliberately cryptic and intriguing chapter titles.

In addition, the beautiful modern electronic music shrouds in mystery an adventure and a quest that will never be clear.

It is no coincidence that the protagonists are all warriors of few words yet stubbornly resolute in their tenacious determination.

These men are tired and dirty, destroyed by a lifetime of wars, with their faces and bodies marked by the scars of countless battles.

Traveling from Iceland to the holy land of the Crusades, they cross the metaphysical fog of the ocean to end up directly in hell.

Hell is not made of flames and brimstone but is a whole new world, full of threats at every turn.

Unfortunately, it doesn’t take a Devil to summon evil because villainy lies within us, just waiting to wake up.

Indeed, ultimately what seems like the cruelest of warriors will achieve a remarkable act of humanity with the ultimate sacrifice.

A unique, surreal and involving experience

Despite not uttering a single word throughout the story, Mads Mikkelsen is the undisputed star of this Viking odyssey.

The Danish actor is a mysterious, invincible warrior we first see as a miserable slave fighting for other amusement.

We know absolutely nothing about him, where he came from, and what he did before ending up in that condition.

Neither do we know how he lost an eye, at whose place there is a scar similar to the Horus eye symbol in the Egyptian religion.

Wanting to hypothesize, he could be the god Odin, forgotten who he is, wandering among us in human form.

The genius of Refn’s film is to tell without openly explaining, leaving room for our interpretations, even crazy and rambling ones.

At his side is the very young Maarten Stevenson, the only surviving clan member who was holding the man prisoner.

He gives him the name of One Eye when they meet the Christians, talking like the voice of the mute and implacable warrior.

Finally, he will be the reason why One Eye will make one last brave and desperate act. However, an act that we will never know was enough to save the boy.

Nevertheless, it dug a deep place in my memory as a memorable experience that is difficult to explain in words.

To summarize, instead of a narrative plot with dramatic twists, we have a charming tale made of images.

If you haven’t seen it yet, run immediately to click the link below to remedy it.

Otherwise, seeing it again won’t hurt if you already know it: you’ll find something you missed the first time around.