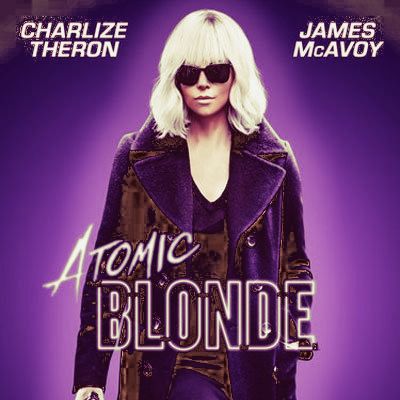 Atomic Blonde is a stylish 2017 action espionage movie directed by the excellent David Leitch and starring the beautiful Charlize Theron.

The story unfolds in the last days before the wall fell between Berlin’s west and east sides.

After the murder of a British agent during a delicate recovery operation, MI6 immediately begins to investigate.

The top brass of the services decided to send a highly qualified woman, not knowing that she secretly had a relationship with the victim.

During those years, Berlin was the worst war zone of the Cold War, populated by spies, criminals, and soldiers everywhere.

Everyone is desperately trying to control the increasingly rampant chaos of the rioting crowds, but significant change is imminent.

Arriving in the city, she finds the spy’s previous contacts and tries to find out what happened.

The man was trying to retrieve, through a Russian defector, the complete list of undercover agents.

Hidden in an ordinary watch, in the wrong hands, this list is an atomic bomb of information that could even start a war.

French espionage is immediately opposed by some Russian spies and sets a young girl to tail her wherever she goes.

When she finally meets the Russian defector, she realizes that he is as valuable as the list since he knows it perfectly through his photographic memory.

Attempting to bring him over the wall, spies divide between who wishes to protect him or kill him.

Caught in the crossfire of the British, American, and Russian governments, she must fight everyone to survive.

Style, colors, and sounds from the 80s

Besides the actors’ skill and charm, the movie exists because David Leitch‘s mastery of the cinematic craft.

The director was coming from the first John Wick, co-directed with Chad Stahelski, with whom he shares an exceptional talent in handling exciting shots and fights.

Both were excellent stuntmen in numerous successful films, such as The Matrix, The Crow, and the Jason Bourne saga.

If it were necessary, this success has projected the director into the world of blockbusters, getting the direction of Deadpool 2.

In addition, his new film on the famous video game The Division, produced in collaboration with Netflix, should arrive soon.

Leitch starts from a graphic novel subject, The Coldest City, bringing the simple and very appealing aesthetics to the scene.

For all the nostalgic, the social, cultural, and musical trends are as accurate as a detailed guide to discovering the ’80s.

Impossible not to get excited when seeing movie posters or listening to trendy songs by David Bowie and Depeche Mode.

Atomic Blonde is a wonderful glamorous action show of yesteryear and a portrait of the hottest period in international espionage.

This era ended with the wall falling, the ultimate cold war symbol between the USA and Russia after World War II.

So many Stars on the Berlin battlefield

Charlize Theron is always a wonderful and charismatic leading lady and athletically adept in the many fight scenes.

With experience in movies like Mad Max: Fury Road, she is involved with sequences worthy of the finest John Wick.

Waiting at the gates of Berlin is James McAvoy, hilarious playing a hysterical agent with a Sinéad O’Connor-like shaved head.

While tasked to support her mission, he will do plenty on his terms without paying much attention to protocol.

He will be much more likely to conceal the plot, complicate the protagonist’s work, and lie to his superiors.

Wearing the French flag instead, we have the stunning actress/singer/dancer Sofia Boutella.

Playing a naive spy on her first mission, she then ends up falling in love with the beautiful English blonde… and who can blame her?

To the delight of the men’s eyes and the women concerned, their passion will explode into an exciting Sapphic sex sequence.

What more could you ask from an action/espionage movie like Atomic Blonde in 2017?

So put on the most stylish sunglasses and clothes you can find; it’s time to walk the streets of Berlin during the Cold War.

Be sure to watch out for the corners: behind every shadow, a traitor could be ready to stab you in the back.