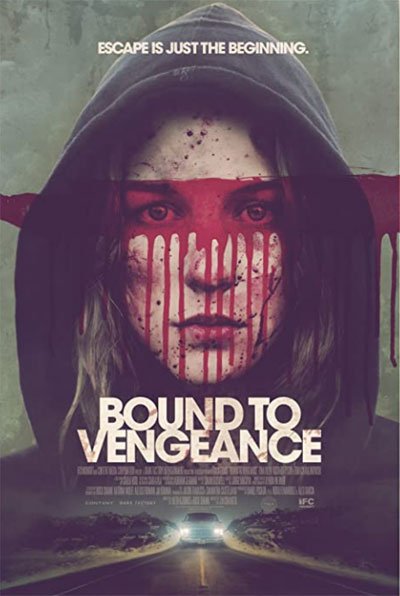 Bound to Vengeance is a 2015 rape and revenge movie unfolding unusually, with the victim escaping just at the beginning.

We don’t know how long the girl lived in that place or even the circumstances she ended up there.

Once she knocks out her captor, she finally walks through that closed door she had been staring at for so long.

She discovers to be in a decaying house amidst nowhere, not knowing what to do or where to go.

She starts rummaging through everything, looking for any clue who this man is and where she is.

Searching through her things, she then finds photographs of several other girls who have suffered the same fate as her.

In a fit of anger and pride, she tries to save them, keeping the man on a leash to guide her.

But the girls she finds suffered severe psychological damage after all that time of the abuse.

One of them even tries to defend her tormentor, jealous because she thinks he wants to replace her with her.

Furthermore, talking to the man she is holding captive, she discovers that these horrors are not the work of a single individual.

Indeed, a whole organized group of these maniacs works together to kidnap girls, abuse them, and then sell them.

As the long night slips with horror toward its end, she too begins to change, becoming as ruthless as they are.

She must then claw her way to the head, unaware of what she will find on the long night’s end.

When the victim becomes the executioner

Bound to Vengeance is a dark, pessimistic thriller that went surprisingly unnoticed among the many movies of 2015.

Compared to many other rape and revenge stories, the reversal of the plot’s timing makes everything different and new.

Slowly, the delicate face of the beautiful protagonist turns into the mask of an impassive uncompromising avenger.

Suddenly finding herself in this horrible underworld that exists alongside our normal one, she ends up entirely sucked into it.

What’s left of her innocence disappears when she tastes the blood of these violent sociopaths who kidnap women to use them as they please.

Nevertheless, even the villains in this story are not simply stereotypical cruel, one-dimensional men.

They are also intelligent and patient, exploiting the hostage syndrome and establishing an unbreakable bond with these girls.

During this long night on the road, the prisoner will try to manipulate her, talking touchingly about her personal life.

Paradoxically, the girl will feel even more contempt when she finally meets her captor’s ordinary family.

The fact that this man can return to his everyday life with his wife and daughter will be what will push her over the edge.

We can say the ending is the most shocking moment, although the least psychologically and physically violent part.

I don’t want to spoil it for anyone, but the story closes with an exclamation point with no hope or pity for any of the characters.

Despite the 2015 debacle, Bound to Vengeance is a movie for all fans of any small but exciting thriller.

José Manuel Cravioto remixes the usual canons of the rape and revenge strand, starting right where they usually end up.

In this way, the director eliminates any obligation to explain a plot that, let’s face it, by now, we all know by heart.

It may seem just a small thing, but this simple change in the order of events is the winning move.

Free of any narrative constraints, the director focuses at this point on what matters most to be different: the direction.

The thriller remains equally tense and engaging for 90+ minutes without giving in to ridiculous exaggerations and improbable action scenes.

Young actress Tina Ivlev is truly a find in the title role, playing a fear that turns to anger with strength and conviction.

Likewise, she is lovely and sweet in the interlude scenes of a home movie with her boyfriend before the kidnapping.

After a few times, these moments can perhaps seem repetitive and misleading or just filler.

But they actually serve a purpose within the narrative when, in the finale, the various storylines come full circle.

Bound to Vengeance was a failure at the 2015 box office, remaining a movie unknown to the general public, except for a few amateurs on the internet.

Unfortunately, a pity for the director who then did not direct other films, ending up directing television series.

So I hope that by suggesting it, someone will be impressed, perhaps encouraging someone else in turn.

Maybe by spreading the word, some enlightened producer will give him a chance to put his talent to better use.