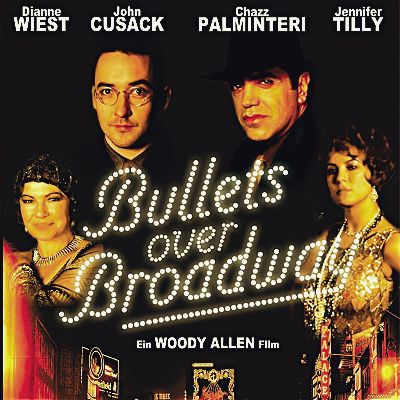 Bullets Over Broadway is a 1994 Woody Allen comedy that combines great humor with his endless love of writing.

Not surprisingly, the story begins with a writer and his producer trying to bring a new play to the theater.

Being penniless, they eventually have to ask for help from a well-known crime boss.

The man enthusiastically accepts, but he demands that his young girlfriend play the main character in return.

This imposition is bad for the writer, as the girl is a stupid actress with no talent.

As soon as rehearsals begin, the cast’s numerous protests about the script become a daily nightmare.

Unable to be accepted as a leader, he seriously considers abandoning the entire project.

However, salvation comes from the most unexpected person, the boss’s rude henchman guarding his girlfriend.

During one of the quarrels on the set, he suggests some changes to the script, revealing immense creative talent.

The writer and the criminal then start seeing each other secretly, rewriting most of the dialogues and the story together.

Although no one knows anything about it, this collaboration works, and the entire cast and producer applaud the changes.

However, despite the actors’ newfound enthusiasm, the total inability of the boss’s woman threatens to ruin everything.

The difference is even more noticeable when she is missing for a few days, and a real professional actress replaces her with a great performance.

So the criminal decides to solve the problem in his own way, killing the girl without hesitation to save his masterpiece.

At that moment, both their lives are in danger, while the play is an immense success with critics and audiences.

Can true talent be learned?

Woody Allen writes and directs one of his best works without being present as an actor like many others.

Nevertheless, the writer’s main character is obviously a fictionalized version of the director, albeit played by John Cusack.

In this hilarious little epic, we witness the work and compromises anyone must make to put on a play.

However, the willing writer eventually realizes that he is not that talented after all this work.

What is only a suspicion then becomes a certainty when he discovers an incredible artist in a thug and murderer.

Despite being ignorant and having never studied anything, the killer has an instinct for writing that leads him to be original and innovative.

Moreover, this artist/criminal duality is surrounded by an ecosystem of lovable and funny characters.

Between fights and secret loves on set, theater life seems to proceed with one problem after another.

Even the writer’s personal life, which he leaves out for work, takes his girlfriend further away.

In this sense is very nice the ending, which I do not want to spoil, but closes the circle with beautiful optimism and romance.

Increasing success then corresponds to greater alienation from loved ones who always remain in the background.

Although it didn’t earn much at the box office, Bullets Over Broadway is one of the best movies of 1994.

An act of love towards theater and cinema, innate and acquired talent, and finally, a portrait of an era of elegance and refinement that no longer exists.

Many stars under the shadow of a great director

Like ever in Woody Allen movies, the choice of cast is of primary importance.

John Cusack is the nervous and weak writer protagonist, unsure of himself and afraid of everyone.

However, this does not prevent him from being arrogant on the set and unable to listen to advice from anyone.

That’s why it’s even funnier when he becomes totally dependent on the criminal, being the only one who knows his immense talent.

This criminal is a wonderful Chazz Palminteri In one of the most successful and complete roles of his career, brilliant and ignorant at the same time.

Initially disinterested in theater and writing, the man will devote himself to it with great passion and enthusiasm.

Killing even to protect his work from the boss’s mistress’s ineptitude, he will put even his life at stake.

Let’s also talk about the lovely Jennifer Tilly, who precisely plays the boss’s lover, whose part in the theater is untouchable.

The beautiful and talented actress here plays along with being made fun of, accepting an ungrateful but amusing role with humor.

She is the clueless and stupid innocent who unwittingly will be the center of the final turn of the story.

Finally deserves mention is the nice Joe Viterelli, here as a dangerous and vindictive boss.

His naive and full-of-life face inspires great hilarity, although unfortunately, we only see him in a few scenes.

Despite being from 1994, Bullets Over Broadway is a movie of other times and therefore remains current in any period.

Even today it has the same strength it had yesterday, the jokes and the situations are brilliant, so you should definitely not miss it.

The Neon Demon – The Magic Power Of Evil Beautiful Women